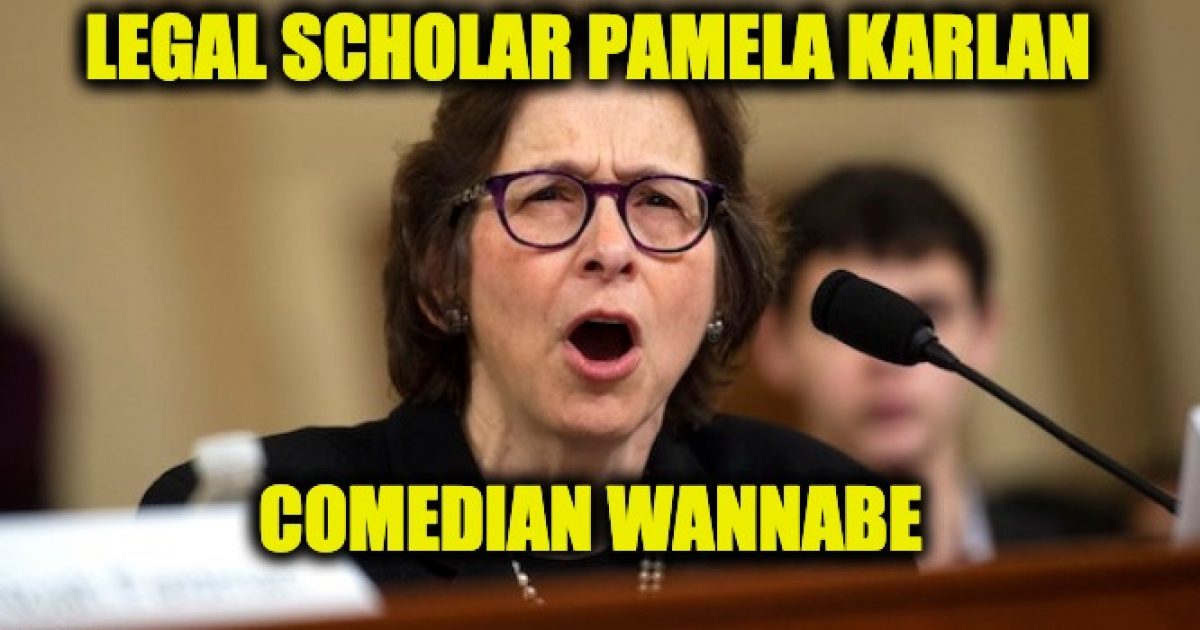 In 2008 MSNBC’s David Schuster was suspended for saying that Hillary Clinton was “pimping out” her 28-year old daughter Chelsea. During the same campaign then-Senator, Barack Obama warned the press to leave his two daughters aged ten and seven, out of the political campaign. But on the first day of Nasty-Nadler’s hearings, one of the Democratic Party-chosen legal scholars chose to tell an unfunny joke about President Trump’s 13-year-old son, Barron Trump.  The legal scholar who made the joke was  Professor Pamela Karlan, who was on Clinton’s list as a potential Supreme Court nomination. That’s another reason to be happy that Donald Trump won the election.

The next witness, Karlan, has donated thousands to Democrats and was on Hillary Clinton’s list for a potential Supreme Court nomination.

So she certainly has no vendetta against @realDonaldTrump.

These witnesses are as serious as House Democrats impeachment case: not at all.

During the hearing, Karlan took a swipe at the president’s 13-year-old son, which inspired a response from First Lady Melania Trump. “I’ll just give you one example that shows you the difference between him and a king which is, the Constitution says there can be no titles of nobility. So while the President can name is son Barron, he can’t make him a baron,” she said.

Gee, that was so funny I forgot to laugh.

Just when you thought this impeachment hoax couldn’t get anymore ridiculous, the witness invited by Democrats is throwing cheap shots at the 13 year old son of @realDonaldTrump. Gross and shameful! pic.twitter.com/ugVZfVYDR9

Melania Trump who rightfully believes raising her young son is her first priority responded on Twitter, saying: “A minor child deserves privacy and should be kept out of politics. Pamela Karlan, you should be ashamed of your very angry and obviously biased public pandering, and using a child to do it.”

A minor child deserves privacy and should be kept out of politics. Pamela Karlan, you should be ashamed of your very angry and obviously biased public pandering, and using a child to do it.

As the hearing was in the middle of its ninth hour, those were still awake saw Rep. Mike Johnson entering Melania’s tweet into the official record.

And Rep. Matt Gaetz, R-Fla., blasted the arrogant conservative-hating Karlan for her attack,

He also found a way for the chosen Democratic Party attorneys to destroy their own anti-Trump testimony when Gaetz asked, “To all of the witnesses if you have personal knowledge of a single material fact in the Schiff report please raise your hand.” No one raised their hand proving that their calls for Trump impeachment were based on their own hatred for the president and nothing to do with facts.

The Trump campaign also responded to Karlan’s attack, stating: “Only in the minds of crazed liberals is it funny to drag a 13-year-old child into the impeachment nonsense.”

“Only in the minds of crazed liberals is it funny to drag a 13-year-old child into the impeachment nonsense.” – National Press Secretary @kayleighmcenany

Our full statement on Pamela Karlan below. pic.twitter.com/XI6eY2oSIH

At 5:55 p.m., Karlan apologized for her attack, but took a swipe at President Trump, saying she wished he would apologize for his statements.

Twitchy noted: “We can’t believe the Democrats actually think they’re doing themselves any favors by hosting this circus.”