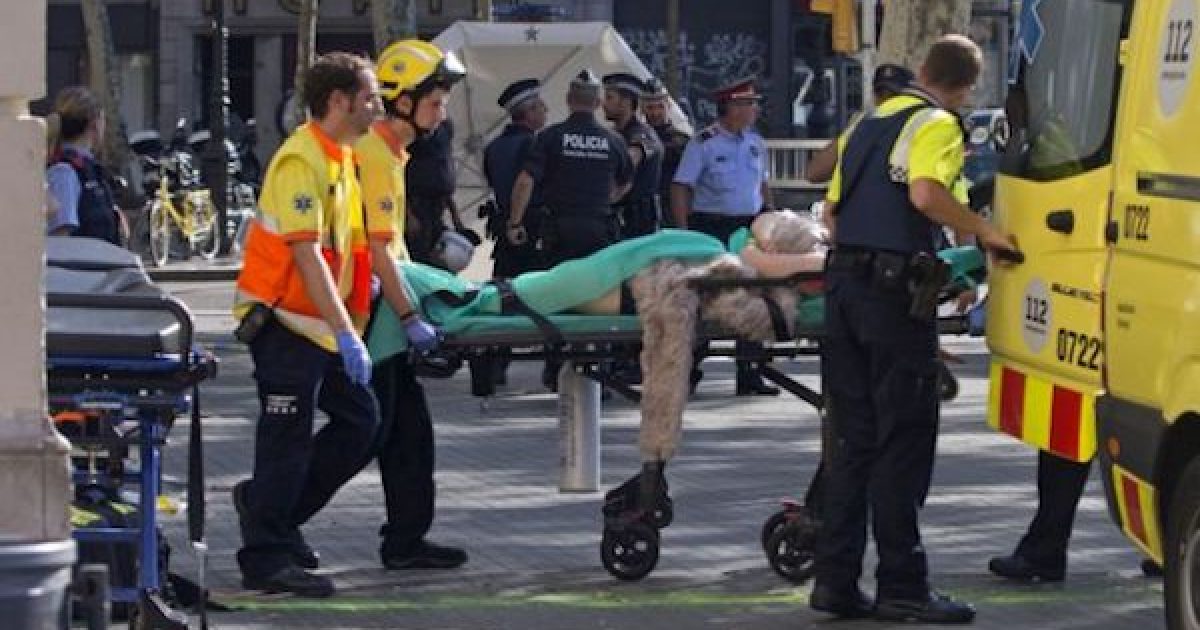 “There are three kinds of lies: lies, damned lies, and statistics:” Benjamin Disraeli

No sooner do terrorists attack than those who monopolize the conversation revert to abstractions: “terrorism returned,” “terror struck,” when, of course, not terrorism, but terrorists struck Barcelona, Spain, on August 17. Terrorists did the same days later, in Newcastle, England and in Turku, Finland.

The men who murdered 14 in Spain, maiming and injuring over 100, 15 of them critically, are flesh-and-blood. Young, Muslim, Moroccan men with murder on their minds. It is the duty of governments to bar such men from civilized society or keep such barbarians at bay.

So, drop the Orwellian bafflegab when describing what elites have wrought through their policies. The Maghrebi Muhammadans—aged, 17, 18, 22 and 24—had been given free range and limitless access to their victims, in the name of those victims’ freedoms.  The only lucky sorts living safely are the elites who grant the barbarians license to kill.

Thus were Theresa May, the Spanish royals, and other leaders—well-protected courtesy of their taxpayers—able to flout the reality faced by the ordinary fellow and utter fatuities like, “These assassins, these criminals won’t terrorize us.” The truth is that these darling buds of May and Merkel do and will continue to terrorize ordinary men and women, but will spare invulnerable elites for reasons obvious.

Of Spain’s many millions, “only” 14 lives were lost in one day, in Barcelona. Similar numbers obtain in London, Manchester, Melbourne, Paris, Nice, Normandy, Stockholm, Saint Petersburg, Berlin, Hamburg, Columbus (Ohio): Only a few people were picked off in each attack, this year. In the grand scheme of things, the numbers are relatively small. Or, so we’re lectured by the contemptible aggregators who decide who will reside among us.

On TV, June 1, 2017, Alex Nowrasteh, an immigration expert at the libertarian Cato Institute, argued that “foreign-born terrorism is a hazard,” but a “manageable” one, “given the huge economic benefits of immigration and the small costs of terrorism.”

Spoken like a collectivist, central planner and utilitarian rolled into one.

This is the Benthamite “utilitarian calculus” at its cruelest. It requires, first, for someone to play God. Whether she sits in Downing Street, D.C., Brussels, or Barcelona; the Godhead has determined that Muslims in our midst are a must in bringing “the greatest good to the greatest number of citizens.” Along the way, a few people will die. For the greater good.

In the words of “Stalin’s apologist” Walter Duranty, ”You can’t make an omelet without breaking eggs.”

However, a natural-rights libertarian values the life of the innocent individual. Only by protecting each individual’s rights—life, liberty, and property—can the government legitimately enhance the wealth of the collective. Only through fulfilling its night watchman role can government legitimately safeguard the wealth of the nation. For each individual, secure in his person and property, is then free to pursue economic prosperity, which redounds to the rest.

See, statistics are silly unless given context. If you have one foot in the fire, the other in ice, can we legitimately say that, on average, you’re warm? Hardly.

Probabilities, in this case, the chance that anyone of us will die-by-Muslim, are statistically insignificant—unless this happens to you or to yours, to me or mine.

Were it possible to arrange for wonks, pols and their beloved to pay for the policies they promulgate—were these ugly aggregators told, “Yes, we like your idea of flooding western societies with Muslims at the price of a few lives—provided that those lives lost belong to you and yours; the John McCains and Jeff Flakes of the world would quickly retract their policy follies.