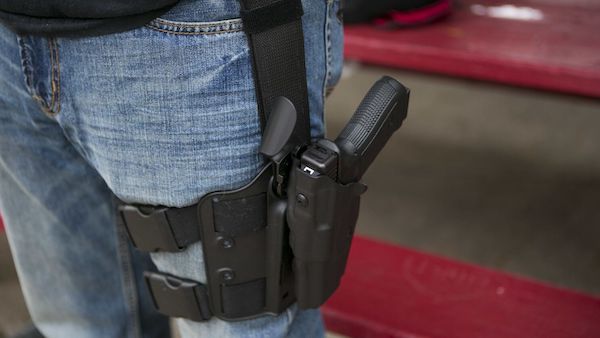 Sometimes the sheer idiocy of the anti-gun gaggle boggles the mind. In Edgewater, Colorado, the city council voted to ban open carry entirely. All but one of their members voted for the ban because they believe that “mass shooters are overwhelmingly far right” (in fact, the ideology of mass shooters is a jumbled mix of people with mental problems who can’t define their own stances with any degree of rationality).

“I would propose the language say, ‘Whereas the city council finds that open carrying of firearms, during the times of civil protest and unrest tends to exacerbate rather than ameliorate the harm of white supremacy and the potential for violence and death.’

Ms. Keeao, I would propose the language say, “This City Council is a bunch of woke imbeciles, so vote us out of office.”

Councilmember Liam Donevan agreed with Gay Keao but said he didn’t think it fit in this ordinance.

“Overwhelmingly, mass shootings are perpetrated by individuals who are motived by a far-right ideology and white supremacy,” Donevan said. “I agree this is an essential and important part of that conversation, I just don’t know if that is part of the impetus for this specific legislation and the goal of our efforts more broadly.”

Really? Where’s your proof sparky? There aren’t any

Gay Keao, who was heavily supported financially by several anti-gun groups, ran as “gun sense candidate,” which included signing a pledge for Everytown for Gun Safety that said if elected she would “govern with gun safety in mind.”

She has taken that pledge seriously. Gay Keao also has been helping a coordinated effort to push gun rights restrictions across numerous Front Range local governments.

Gay, can you read? There’s somethIng called The Bill of Rights. Give it a read one day and pay extra attention to Amendment Number Two. If you can’t read it, allow me to suggest you find a literate person to read it to you. Maybe someone who can explain the big words.

The law took effect on July 24. The Edgewater city Attorney reads the Bruen decision to say that concealed carry can be banned as long as open carry is allowed, so he figured the reverse must be true. The entire premise of the Supreme Court Decision was turned on its head by the city of Edgewater.

Personally, I believe that Ms.Keao introduced a bill for concealed IQ.

They have cited the fear of open carry as another reason for banning it. Emotions are never a good way to govern – The Constitution is the best way. Not one mass shooter was “innocently open carrying a gun” before they decided to slaughter people. There are always patterns of behavior preceding such acts of violence. They don’t just wake up one morning, grab a cup of coffee and say, “I think I’ll go kill a bunch of people today.”

Apparently, the other members of the Council disagree. There will likely be court challenges to 2A restrictions for cities and states nationwide. Hopefully, they won’t use White Supremacy or the far right as an excuse. But if they’re anything like the Edgewater, Colorado. City Council, you might hear they blamed the need for a ban of open carry on the tooth fairy, little green men, or the cancellation of their favorite TV show.

Parts of this post were first seen at  Conservative Firing Line.