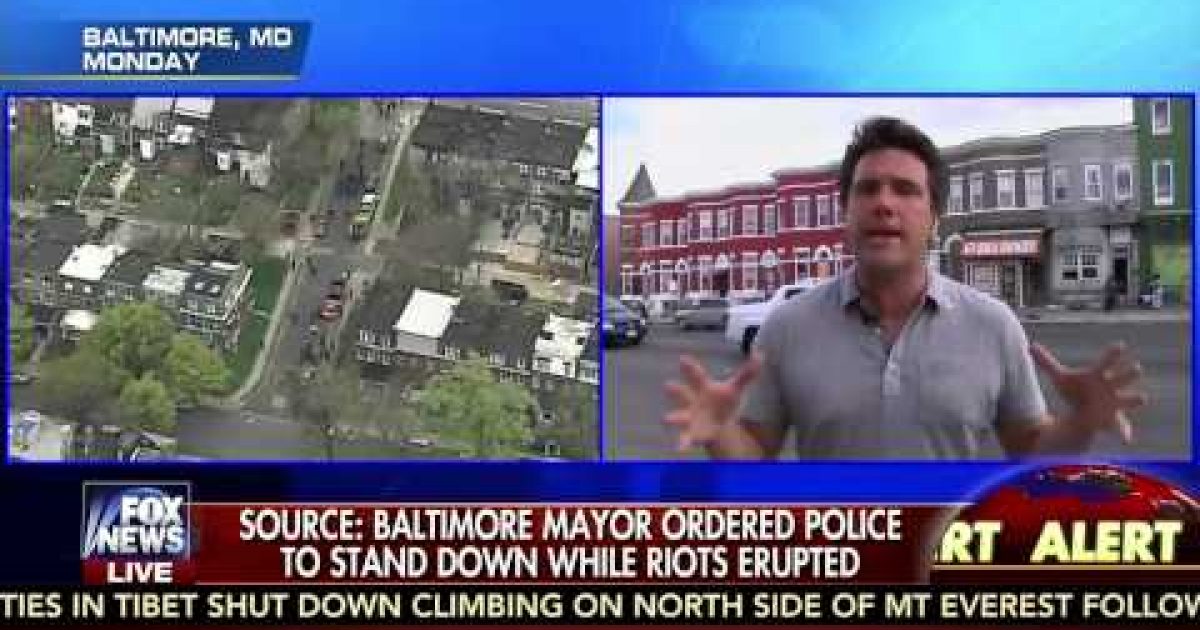 Fox News’ Leland Vittert is reporting that on Monday, Baltimore Mayor Stephanie Rawlings-Blake gave a direct order to the police to stand down and not confront the rioters. While not named Vittert’s sources were senior law enforcement officers.

My source tells me and it’s a senior law enforcement source involved in trying to deal with these riots from the very beginning, that they were told by the mayor, the direct quote is, let them loot. It’s only property. And the video tells a very telling tale. This is where I was standing on Monday night. This store behind me was looted. The liquor store across the street was looted and it wasn’t on for hours. The other liquor store, the green building right there was looted as well. When all of that was happening, the police were standing the whole time. Just about at the top of the hill right there, they watched it all happen and did nothing, Dana. My source tells me that that was a direct order from the mayor down to the chief of police and then down to their police force to let this happen on Monday. Let the brick throwing happen and rioting happen.

The report on the Fox website adds, “Asked directly if the mayor was the one who gave that order, the source said: ‘You are God damn right it was.'”

Earlier on Tuesday, the Mayor was interviewed by Bill Hemmer and she denied that she ordered a stand down:

“You have to understand, it is not holding back. It is responding appropriately,” she said, saying there was no stand-down directive.

But the Vittert report not only explained the stand down orders, but earlier incidents where the Mayor supposedly ordered the Police not to wear all of their riot gear as they were pelted with rocks.

My source tells me that that was a direct order from the mayor down to the chief of police and then down to their police force to let this happen on Monday. Let the brick throwing happen and rioting happen. I was told by two additional law enforcement officers that on Saturday some officers were ordered not to put on certain protective gear and a lot of folks got hurt by the rocks and bottles and bricks being thrown at them. They were ordered not to put on the protective gear by the Baltimore police.

… I’m told that on Saturday there was a number of orders that went down about what police officers were allowed to wear. You might remember on Saturday there were a lot of bricks coming in and those kinds of things. And I’m told that those police were allowed to use their riot shields and helmets but were not allowed to use the big sticks that protect you against bottles and bricks and provide some kind of cushion. I’m told that the Baltimore police ordered a number of officers, including those coming from other places, to simply try and help to not wear those protective uniforms. Obviously that changed over the next couple of days, especially as we saw on Tuesday when the police finally decided to really lay down the law.

Watch the full report on the video below.