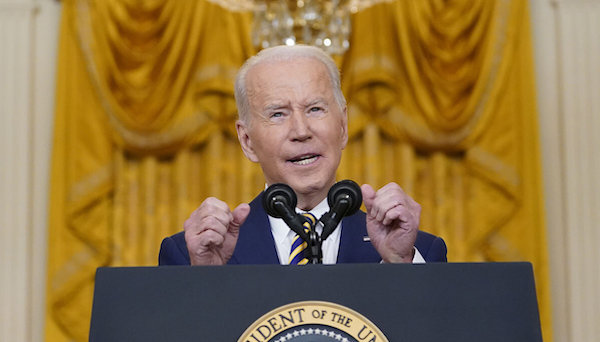 One day after Joe Biden’s catastrophic press conference, the Associated Press is reporting that his first year in office closed “with a clear majority of Americans for the first time disapproving of his handling of the presidency in the face of an unrelenting pandemic and roaring inflation.”

KOMO News in Seattle, the local ABC affiliate, and the AP reported a new survey by the AP and NORC Center for Public Affairs said, “More Americans disapprove than approve of how Biden is handling his job as president, 56% to 43%. As of now, just 28% of Americans say they want Biden to run for reelection in 2024, including only 48% of Democrats.”

Rasmussen’s Daily Presidential Tracking Poll shows the president with 48 percent of likely voters who “strongly disapprove” of his job performance, while only 20 percent “strongly approve.”

And Fox News is reporting, “Democrats supported his message, but independents and Republicans both gave the president an ‘F’ grade.”

Biden’s performance during his press conference raises eyebrows across social media and among some in the media. As noted by Fox News, Biden’s flare-up with Real Clear Politics correspondent Phillip Wegmann was not his finest moment. Wegmann asked about his remarks associating opponents to the Voting Rights Act with Bull Connor and Jefferson Davis. Connor was an Alabama politician who strongly opposed the Civil Rights Act. Davis was the president of the Confederate States of America during the Civil War. Both men were Democrats.

Mollie Hemingway, senior editor at The Federalist, reportedly wrote this about the Biden-Wegmann exchange: “’ GO BACK AND READ WHAT I SAID!’ Biden yells in response to the (mild) Phil Wegmann beginning to ask a mild question about Biden’s comparison of political opponents to racists. Then reiterates the thing that got everyone mad? Holy wow, is this weird.”

Biden’s challenge to Wegmann to “Go back and read what I said” seemed to suggest Wegmann was misquoting him.

Biden’s attempt to explain his Atlanta remarks did not go well. According to The Hill, Biden insisted, “I did not say that they were going to be a George Wallace or a Bull Connor. I said we’re going to have a decision in history that will be marked just like it was then. You either voted on the side — that didn’t make you George Wallace or it didn’t make you Bull Connor, but if you did not vote for the Voting Rights Act back then, you were voting with those who agreed with Connor.”

Biden is running out of issues on which he might win, leading the Second Amendment Foundation to conclude his next battlefront will be the Second Amendment. SAF announced Wednesday it will launch radio advertising Monday to educate the nation’s gun owners about Biden’s gun control schemes.

“Biden came into office with a far-reaching gun control agenda,” said SAF founder and Executive Vice President Alan Gottlieb, “and our mission is to educate the nation’s millions of gun owners about the serious threat his proposals pose to Second Amendment rights.

“With virtually every one of his major campaign promises being defeated,” Gottlieb added, “what remains is an attack on the Second Amendment. Our message will warn radio listeners about what Joe Biden is doing to gun rights.”

With his poll numbers tanking, Biden cannot afford to lose much more. Fox News has detailed some of his worst moments during the past year.