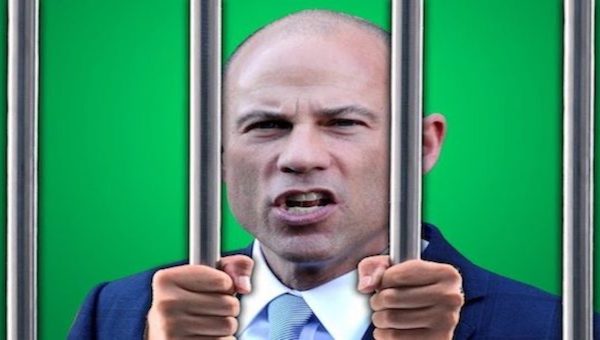 It looks like Michael Avenatti won’t be able to make it onto the ballot in 2024 because of his *ahem* living arrangements for the next couple of years. Still, he might have a shot for 2028 — that is, if he wasn’t a convicted criminal caught defrauding his clients, trying to extort millions from Nike, and a horrible excuse for a human being.

It looks like Michael Avenatti won’t be able to make it onto the ballot in 2024 because of his *ahem* living arrangements for the next couple of years. Still, he might have a shot for 2028 — that is, if he wasn’t a convicted criminal caught defrauding his clients, trying to extort millions from Nike, and a horrible excuse for a human being.

The disgraced lawyer is serving a 30-month prison sentence for trying to extort $20 million from Nike by threatening to go public with damaging information about the company.

In court on Thursday, District Judge Jesse Furman described Avenatti’s conduct as “so brazen and egregious” and that the lawyer “took advantage of a vulnerable victim given her unorthodox career and somewhat unorthodox beliefs,” referring to Daniels.

CNN's Brian Stelter last year on Michael Avenatti running for president: "And looking ahead to 2020, one reason I’m taking you seriously as a contender is because of your presence on cable news.” pic.twitter.com/2Wn2bX17kx

Avenatti actually got off easy since the wire fraud charge alone was up to a 20-year sentence.

…Part of Thursday’s sentence will be served alongside the Nike sentence, but Furman said Avenatti will have to serve an additional two and a half years after he completes the Nike sentence.

The prosecutor in the case spoke out after the hearing.

“This is the conclusion of what — thanks to the pandemic — has been three years of investigating and prosecuting the defendant for a litany of crimes,” Assistant U.S. Attorney Matthew D. Podolsky told the judge.

The prosecutor added that it was about an “incredible personal betrayal” of Daniels, whose real name is Stephanie Clifford…

…Avenatti’s represented Daniels in her attempt to free herself from a non-disclosure agreement that kept her from going public with her alleged affair with former President Donald Trump. They both became social media and cable TV stars in the process, and Daniels parlayed that into a book titled Full Disclosure.

A jury found that Avenatti defrauded Daniels out of nearly $300,000 of her $800,000 advance, through a months-long scheme that Podolsky described on Thursday as “cockamamie.” Avenatti unsuccessfully claimed at trial that he was entitled to the remuneration.

The unpleasant ride isn’t over for Avenatti, either.

Next month he goes on trial in California for allegedly embezzling $10 million in settlement funds from at least five clients.

He also faces tax fraud and bankruptcy fraud charges, to which he has pleaded not guilty.

The left was so desperate to “own” Trump that they made a smarmy lawyer their #Resist! Hero.

That Time the Media Dubbed Michael Avenatti ‘Savior of the Republic’ pic.twitter.com/qrQeBFH3ZI

That last clip of Avenatti saying that all of his sexual fantasies involved handcuffs doesn’t age well, especially now that he’s serving time.

While many Republicans are “pouncing” and expressing their joy that justice still exists and this scumbag is getting the punishment he deserves in slow, painful drips, there’s only one response on Twitter that really matters today…

To you and your family, too, Don Jr! And especially to your Dad.