Austrian Program: Get COVID Vaccine At Brothel, Get Hooker For Free

A Poke For A Poke? 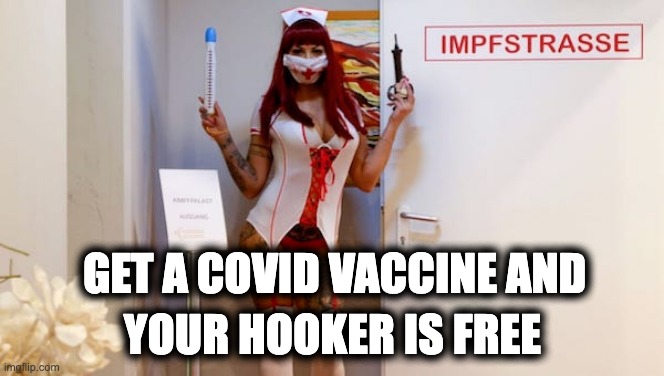 I’ve heard people say that the COVID vaccine is just another method for the government to screw the population, but I didn’t know they meant it literally.  The program offers two types of pokes, the CoronaVirus vaccine, and the kind of poke one expects to get at a bordello.  An Austrian brothel is offering a unique way to motivate people to get the coronavirus poke. Get the vaccine and get a free half-hour with the harlot of their choice.

Bribing people to get ‘the jab’ is nothing new. We’ve seen people offer cash, donuts, burgers, lottery tickets, and even free pot. But this is the first time anyone is offering a free session with a lady of the evening for getting the CoronaVirus vaccine.

This clip should give you a sense of what’s going on.

A brothel in Vienna is providing #COVID19 vaccinations and giving those who take up the offer vouchers for a free visit.

In exchange for a jab, visitors get a free 30-minute session in a "sauna club" with the "lady of their choice".

Apparently, the brothel had a severe drop in revenue because of COVID restrictions. Now that regulations are easing, they decided this would be an excellent way to start hooking an increase in traffic and eventually pump up their revenue:

“We are very popular,” Christoph Lielacher, director of the Fun Palast in Vienna, told Reuters of the enticing new initiative, which they created in response to the recent government mandate barring the unvaccinated from restaurants and other indoor areas amid an infection spike last week. The measure — known as 2G — had reportedly caused a 50% dip in the number of clients at the brothel, the Daily Mail reported.

To help stem the financial hemorrhage, Fun Palast is offering the COVID jab every Monday from 4 pm to 10 pm through the end of November. Best of all, men who get inoculated on-site will be gifted a free 30-minute session in the skin merchant’s VIP club with the “lady of their choice.” Think of it as a sexy nurse role-playing scenario but with actual medical care.

This may seem crazy, but we live in a world where a Nobel Prize-winning medication can be denounced as a ‘horse dewormer,’ but people can go to a  house of ill repute for a government-mandated vaccine.

What next, free tattoos? At least a tattooist has prior experience with needles. But wait, there’s more!

Boys as young as 14 are reportedly allowed access to the clinic, provided they have an adult with them, while women are also being encouraged to head to the Fun Palast for a coronavirus shot.

Per the Jerusalem Post, the program is open to everyone

“although specifically to foreign workers, who lag in their rate of vaccination, are unfamiliar with local laws, and lack access to vaccines. The Funpalast hopes to boost vaccination rates among this key demographic in Austrian society. Furthermore, 95% of Austria’s sex workers are foreigners, according to Austria’s Federal Ministry.”

Brothels are legal in Austria as they are in the U.S. But here in the U.S., they are different kinds of brothels. Instead of whore houses, Johns, and hookers, they are known as the U.S. Capitol, lobbyists, and members of the House and Senate.

There is no word on who gets that 30-minute freebie when it’s women or a  kid younger than 14 deciding to get poked in a den of iniquity. Who knows, it might lead to an increase in people’s faith, as suggested by this short clip from the movie “Animal House.”