Attkisson: CBS Protected Obama From Mistake Made In Romney Debate. 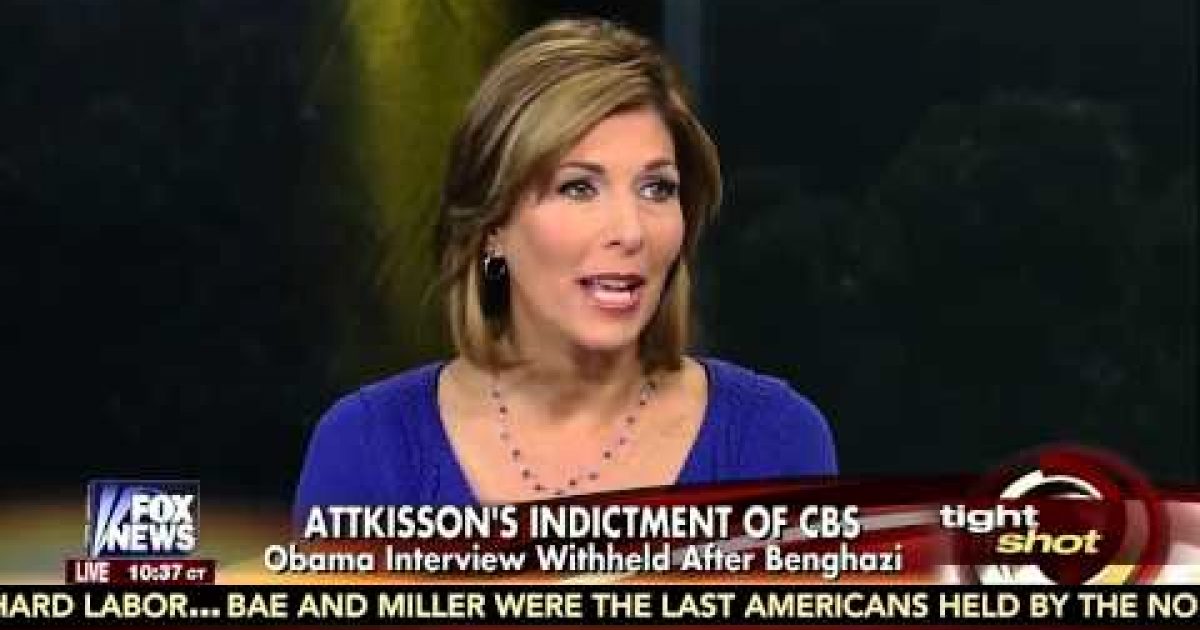 On Fox News’ MediaBuzz Sunday, investigative journalist Sharyl Attkisson said CBS executives intentionally hiding a clip from the day after the Benghazi attacks with President Barack Obama refusing to admit Benghazi was a terrorist attack. They also prevented her from using the clip because it would have backed up Mitt Romney’s claim that the President didn’t call the Benghazi attack terrorism for the two weeks after the attack, a claim that was wrongly corrected by debate moderator Candy Crowley.

Host Howard Kurtz asked Atkisson: “Let’s talk about what happened with ’60 Minutes,’ the day after the Benghazi attacks with President Obama. and that sounded like — or some of that interview ended up not being used. after the second 2012 debate, it became a big issue whether or not the president had or had not referred to Benghazi attacks as terrorist attacks.”

Kurtz plays “60 Minutes” clip where Obama refuses to acknowledge the attack was terrorism.

Attkisson: Let me say that that exchange should have been pulled out immediately after the debate, which would have been very newsy at the time. It was exclusive to CBS. It would have to me proven Romney’s point against Obama. But that clip was kept secret.

I was covering Benghazi, nobody told me we had it and directed me from the ‘Evening News’ to a different clip of the same interview to give the impression that the president had done the opposite. And it was only right before the election that somebody kind of leaked out the transcript to others of us as CBS and we were really shocked. We saw that was something very unethical done to have kept that up.

The ‘Evening News’ people who had access to that transcript, according to the emails that I saw when it was sent from ’60 Minutes’ to ‘Evening News’ the very day it was taken, they, in my view, skipped over it, passed it up, kept it secret. And I think that was because they were trying to defend the president and they thought that would be harmful to him.”

The most controversial part of the second 2012 Presidential debate began with Romney’s response to Obama’s answer to a Libya question :

Romney: Yeah, I — I certainly do. I certainly do. I — I think it’s interesting the president just said something which is that on the day after the attack, he went in the Rose Garden and said that this was an act of terror. You said in the Rose Garden the day after the attack it was an act of terror. It was not a spontaneous demonstration.

Romney: Is that what you’re saying?

Romney:  I — I — I want to make sure we get that for the record, because it took the president 14 days before he called the attack in Benghazi an act of terror.

Obama:  Get the transcript.

Obama:  Can you say that a little louder, Candy? (Laughter, applause.)

When I approached John Sununu, Romney surrogate and form NH Governor after the debate he was seething as he said, “the moderator and the President were dead wrong.”

The President threw the world out in his statement at the Rose Garden but never said it was an act of terrorism. And two weeks afterwards the President said, not in a news conference, not in a passing comment but went to the UN and at the UN, six times blamed it on the video. It was the most dishonest statement I have ever heard by a president in a presidential debate.”

I asked him about the Crowley interruption:

Candy was wrong and Candy had no business doing that and she didn’t even keep the time right.

Indeed Romney was correct.The day after the terror attack in Benghazi, President Obama gave a Rose Garden Speech of 801 words. He mentioned the word terror once near the end of his speech but not in reference to the horrible attack.

During that brief statement, President Obama referred to Benghazi as; An attack on our diplomatic post in Benghazi; this outrageous and shocking attack; attack; terrible act. Obama called the people who perpetuated the attack “the killers who attacked our people.” He did not call them terrorists.

In the fourth paragraph of that Rose Garden speech, the alluded to the anti-Muslim video. Obama knew at the time (and we know now) that video had nothing to do with the attack:

Since our founding, the United States has been a nation that respects all faiths. We reject all efforts to denigrate the religious beliefs of others. But there is absolutely no justification to this type of senseless violence. None. The world must stand together to unequivocally reject these brutal acts.

Six paragraphs later Obama used the “T” word in what seemed as a reference to the anniversary to 9/11:

No acts of terror will ever shake the resolve of this great nation, alter that character, or eclipse the light of the values that we stand for.

If the 60 Minutes clip was released the day after the debate as it should have, Obama (and Crowley) would have been seen as covering up the truth, something that may have changed the course of a close elections.