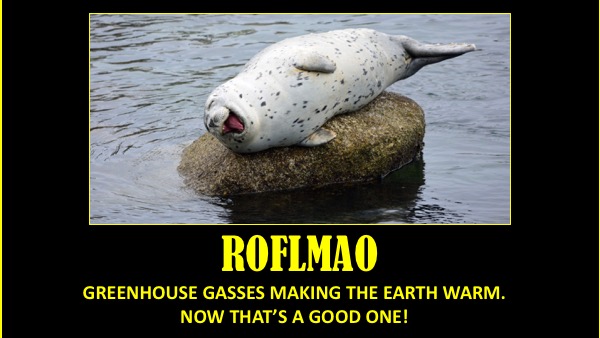 Scientists Ned Nikolov and Karl Zeller have a unique and extremely elegant peer-reviewed and published research paper entitled ‘New Insights on the Physical Nature of the Atmospheric Greenhouse Effect Deduced from an Empirical Planetary Temperature Model’ that proves that the accused Greenhouse Gases (Carbon Dioxide (CO2), Water Vapor (H2O), etc.) are actually innocent of the mistaken claims that they are the cause of Climate Change and the ‘Greenhouse Effect’.

Their work comes out of left field; it provides a shocking new paradigm heretofore unbeknown to science; it is physically plausible, and it proves beyond a doubt in principle that greenhouses gases cannot cause, , the global warming observed since 1850. In other words the paper offers scientific proof that humans are not responsible for climate change on Earth.

However, the problem now is that both believers and skeptics of anthropogenic-caused climate change have a difficult time accepting the Nikolov-Zeller (NZ)  discovery, because:

The Nikolov-Zeller discovery points to the fact that fundamental theoretical misconceptions can still occur in science despite the high-technology information environment of the modern world.

Rather than argue about global temperature trends or what the sensitivity of Earth’s climate to a CO­2 increase might be, Nikolov and Zeller decided to go back to the basics taking inspiration from Copernicus, who proposed the revolutionary heliocentric model of the Solar System that was later mathematically proven by Johannes Kepler.

Nikolov and Zeller divined three (3) fundamental questions that most climate scientists do not consider worth asking or thinking about:

Analyzing vetted NASA data from various space exploration missions conducted over the past three (3) decades, Nikolov and Zeller found that the Earth’s 30-year equilibrium surface temperature is quite stable and fully explainable in the context of an interplanetary physical continuum.

They discovered that the real factors responsible for the ‘Greenhouse Effect’ are:

By applying their PTE Effect theory to compute and accurately predict the 30-year mean global surface temperature of Earth.  Likewise, by knowing extraterrestrial data-parameters for Mars, Venus, Moon, Titan and Triton, they can also make predictions for other celestial bodies.

Amazingly, as it turns out, their model (empirically derived from NASA data) does not need any information about atmospheric composition to reliably calculate Earth’s or other celestial bodies’ mean global surface temperature!

In other words, the amounts of greenhouse gases are not needed nor relevant.

In other words, the Greenhouse Effect is a Pressure-induced Thermal Enhancement (PTE) Effect and not a radiative phenomenon driven by heat-absorbing & re-radiative gases as currently believed. Hence, carbon emissions cannot affect the global climate.

The sensitivity of Earth’s climate to Carbon Dioxide (CO2) is virtually zero!

Some 500 years ago, Copernicus simplified the complicated “Earth-Centered” model describing planetary retrogressions that accounted for the apparent erratic movement of the planets & sun around the Earth by conceptually observing Earth from afar and recognizing that the existing theory was based on a false premise (i.e., the Earth was at the Center). He correctly discovered that the Earth and other planets rotated around the Sun eliminating the apparent erratic movements and complicated prediction equations.

Similar to the way a Diesel Engine’s piston compresses gases (only constant, non-cyclical) creating pressure that enhances the existing heat in each cylinder to reach the temperature needed to ignite the fuel – The huge mass of the Earth’s atmosphere’s gas molecules, being compressed by the natural pull of gravity, provides the constant Pressure-induced Thermal Enhancement (PTE) of the available Solar Heat-Energy which results in the PTE ‘Greenhouse Effect’ that keeps our planet habitably warmer than it would be without an atmosphere (i.e., a global mean temperature of approximately 58oF with our atmosphere vs. below 0oF without an atmosphere).

Making this new climate-science paradigm most promising is the fact that the Nikolov-Zeller discovery:

Their findings also provide new insight as to why the man-made UN IPCC-supported Global Climate Models (GCMs) based on the radiative ‘Greenhouse Gas’ concept and assumptions consistently fail to predict observed global temperature trends, hence they should not be used for policy decision making.

More information on the Science of their discovery is presented in a video by Ned Nikolov, use this link:

NB: Volkin and ReLlez are pseudonyms for Nikolov and Zeller.