Is The Associated Press’ Trump Reporting As Bad As CNN’s? 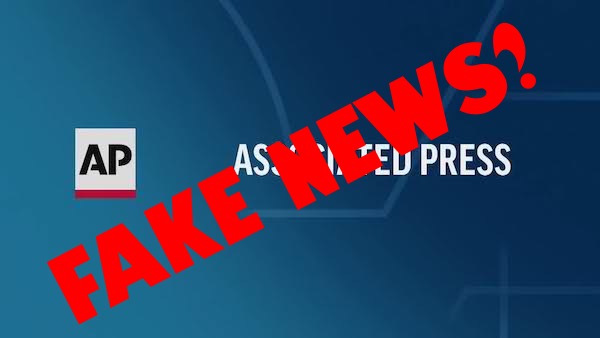 The Associated Press is a strange animal. The truthfulness of their reporting depends on who’s reporting. For example I trust whatever comes from their diplomatic reporter, Matt Lee. But in other areas such as their reporting about President Trump….well, read the below and decide:

While CNN has been dominating headlines in recent days with their unfathomable journalistic irresponsibility, it seems as though there are skeletons in several other outlets’ closets as well.

The liberal news network, which gained the notorious nickname of the “Clinton News Network” during their horribly biased coverage of the 2016 Presidential campaign, has been warring with President Donald Trump over their ridiculous content, particularly as it pertains to a democratically invented conspiracy theory regarding Russia’s involvement in Trump’s bid for the White House.  Trump, who is a prolific user of Twitter, has been able to respond to CNN’s lame accusations in realtime, something that the network is having a difficult time planning their defenses around.

Now, however, a once-great news and media institution is at the epicenter of another “fake news” scandal that could rock the entire way that we look at our national information culture.

“A Breitbart News investigation has led to the correction by the Associated Press–which originally resisted–of the fake news it printed as deeper questions of responsibility, accountability, and journalistic ethics consume the AP heading into Fourth of July weekend.

“This time, the Associated Press invented an imaginary meeting between EPA administrator Scott Pruitt and Dow Chemical CEO Andrew Liveris, and then alleged that some kind of impropriety happened as a result.

“This is exactly the same mistake CNN made a week ago, when it alleged that Anthony Scaramucci—the founder of SkyBridge Capital and an associate and ally of President Donald Trump—held ‘meetings’ with Russian investment fund leaders and was under investigation by the Senate Intelligence Committee and Treasury Department as a result.

“A Breitbart News investigation uncovered that no such “meetings” took place, the Senate Intelligence Committee was not investigating the matter, and the Treasury Department had already—at the urging of Sen. Elizabeth Warren (D-MA) to now Treasury Secretary Steven Mnuchin before Trump’s inauguration—looked into it and determined the matter to be entirely ‘without merit.’”

CNN’s response to Trump has been a pathetic one, simply whining about his attacks on the network rather than addressing the issues at hand, but there’s no indication yet of how the Associated Press will move forward.

The “fake news” moniker was ironically invented by CNN during their initial coverage of the first iteration of the aforementioned Russian nonsense.  At one point, the conspiracy theory attempted to claim that Russia was infiltrating right wing news websites with false stories, in an attempt to sway voters away from Donald Trump.

We can all see just how well that worked.