Arrests of Illegal Immigrants Have Doubled Under President Trump 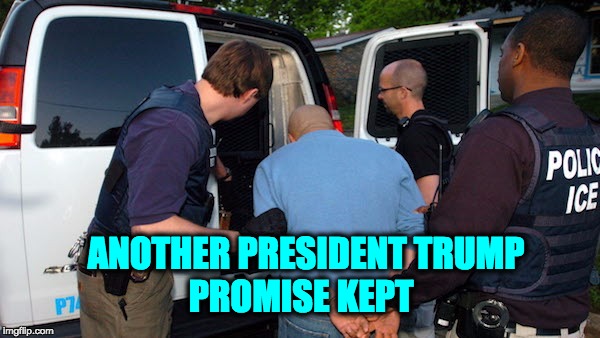 The media can say what they will about the President, but to argue that he isn’t doing exactly what he promised he would do during the campaign would be a lie, especially when it comes to law and order arrests.

The President has already repealed a large number of President Obama’s Executive Orders, he’s worked hard to bring manufacturing jobs back to the Rust Belt, he’s gotten important trade concessions from the Chinese, and perhaps most importantly he’s had a tremendous effect on the number of illegal immigrants entering the country. While, there have been few policy changes on immigration thus far during the Trump era, there has been a major slowdown in the number of migrants entering the country.

“Apprehensions of people trying to sneak into the United States, seen as an indicator of the total flow of undocumented immigrants, dropped to 16,600 in March, down 30 percent from February and 64 percent from a year ago.

“Kelly told the Senate Committee on Homeland Security that there was even a sharper fall in the number of families and unaccompanied children crossing the border.

“’We’ve seen an absolutely amazing drop in the number of migrants coming out of Central America,’ he said.

Congress has joined in helping the Trump administration put the brakes on illegal migration to our nation. The House recently passed two bills that could soon become law and should help stem the tide of illegal immigrants:

The House finally passed a bill that’s become known as “Kate’s Law,” which would increase penalties for illegal aliens who have already been deported and are caught attempting to reenter the country…

For it’s part Immigration and Customs Enforcement (ICE) says that the immigration slowdown has a lot to do with a change in the Executive Branch’s focus on fighting illegal immigration.

“We’re still focusing on criminals, but we’re not confined to them,” ICE’s Assistant Field Director in San Diego, Clinton Johnston told the San Diego Union-Tribune. “It’s the ability for us to enforce the law across the board.”

“All we’re trying to do is protect the community and remove the threats,” ICE San Diego Field Director for Enforcement and Removal Operations Greg Archambeault said.

Particularly in Southern California where arrests of illegal immigrants is WAY UP.

From February through May of this year, San Diego’s fugitive operations team has arrested 547 people, according to data from ICE. That’s more than double the total for the same months last year, at 242, or the year before, at 267. In 2014, before Obama narrowed immigration enforcement’s priorities, San Diego’s fugitive operations team arrested 540 people in the same time frame.

A new study shows that nearly 20 percent of illegal aliens in the U.S. live in the metropolitan areas of New York and Los Angeles.

According to the Pew Research Center’s data, a staggering 1.5 million illegal aliens are expected to live in the New York City and northern New Jersey region.

Likewise, about one million live in southern California, with Houston not too far behind. 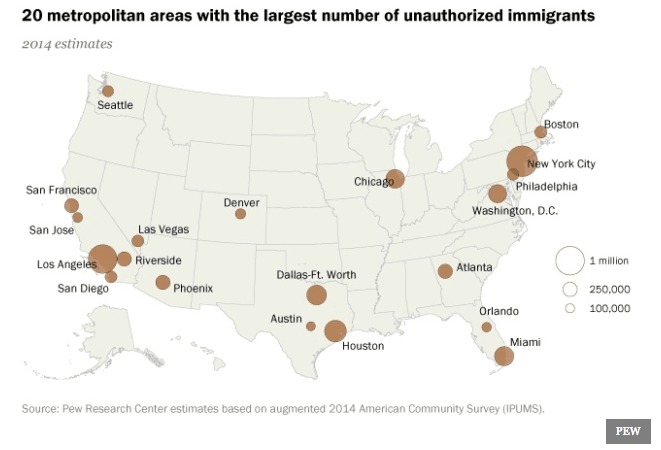 What does it all mean?

It means that President Trump is keeping his most important campaign promise and he is helping to slow the flood of illegal immigrants into the United States. Using every means at his disposal he, Congress, and our law enforcement have slowed the flood into our nation and begun to send larger numbers of the illegal population home.

This is what he was elected to do, and he’s getting the job done.