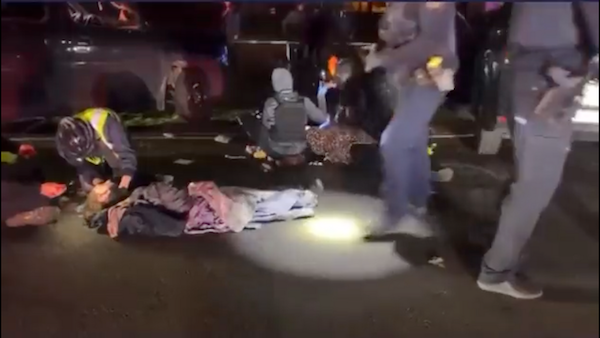 An armed Antifa confrontation with an armed Portland Homeowner near Normandale Park left one woman dead and 5 other people wounded on Saturday just after 8 p.m. Immediately after the incident, Antifa called for members to delete evidence from social media and not talk to investigators, while continually threatening Post Millennial journalist Andy Ngo. 23 police units, 4 fire, and medical units arrived at the scene by 9 p.m. Two people were taken into custody, according to KGW.

Police Homicide investigators had extreme difficulty working the scene because people were uncooperative. The PPB only recovered 8 shell casings from the neighbor’s .45. Only one rifle casing was recovered, likely because the rest were removed per the orders of the far-left group, according to Oregon Live.

After the mass shooting involving #antifa at their gathering in Portland last night, they're calling for comrades to delete evidence from social media & to not talk to investigators. pic.twitter.com/2djBBVtWlb

Per the Portland Police Bureau

The scene was extremely chaotic, and a number of witnesses were uncooperative with responding officers. Most people on scene left without talking to police. Detectives believe a large number of people either witnessed what happened or recorded the incident as it unfolded. This is a very complicated incident, and investigators are trying to put this puzzle together without having all the pieces.

When police attempted to give a press briefing, the Antifa members shouted them down to the point that they gave up and rescheduled the briefing.

The deceased woman was June Knightly, an Antifa/anarchist also known as “T-Rex.” Note the symbols used by Antifa and other far-left anarchist groups on the graffiti around the “memorial” at Normandale Park. A man (the homeowner) involved in the shooting is a machinist named Benjamin Jeffrey Smith, 43, who lives in the neighborhood. He has been growing upset at the constant leftist protests, according to his brother.

Breaking: Oregonian reports that the man involved in the deadly shootout against #antifa is Benjamin Smith, a 43-year-old machinist. Antifa accounts have been tweeting about him, saying he is a right-wing furry who was identified by their furry comrades. https://t.co/ComOjmyKvl pic.twitter.com/8e9J39XTfN

Antifa goons and their leftist friends are continually threatening Andy Ngo for reporting on their activities.

Disinfo #antifa accounts are spreading false claims about the shooting in Portland. They falsely claim I posted a flyer about their event & that I was involved in the shooting.

Marysa Leyva says it is time for me to die. Felony suspect Alissa Azar says I have blood on my hands. pic.twitter.com/6RrBm1iZ5G

And so another evening in once-beautiful Portland, Oregon goes by as an armed Antifa claims another life, this time one of their own.