Man Dies By Taking Aquarium Cleaner Instead of Medicine; Trump Gets Blamed 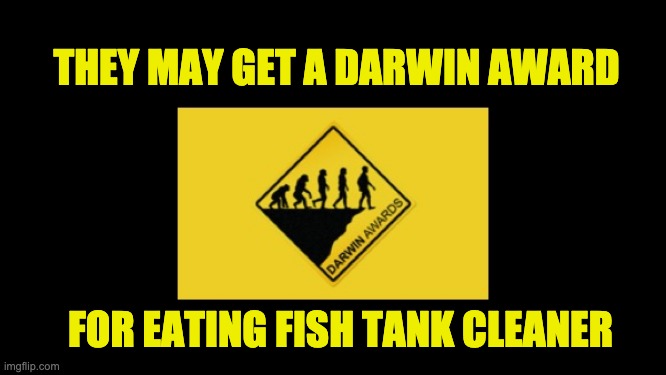 I am reminded of the old joke about the couple who froze to death at the drive-in movie theater. They thought the movie on the marquee looked so exciting, it was called “Closed For The Winter.” But this report is not about a movie. In this case, the President is being trashed because a couple took an aquarium cleaner because it’s called something that sounded like the malaria drug Trump recommends as a possible treatment for Covid-19. aquarium cleaner instead of medicine

An Arizona man died, and his wife is in critical condition. They self-medicated themselves with an aquarium cleaner to prevent contracting Coronavirus. They were convinced that chloroquine was “pretty much a cure” after listening to one of the President’s press conferences on Coronavirus–and it shows promise. Unfortunately, they either thought they were growing gills, or they completely misunderstood the information that was presented, and it was a deadly mistake. They didn’t take the anti-malarial drug, chloroquine — they took an aquarium cleaner chloroquine phosphate.

At least, that’s what you would learn if you read the article and not just the headline.

The toxic ingredient they consumed was not the medication form of chloroquine, used to treat malaria in humans. Instead, it was an ingredient listed on a parasite treatment for fish.

Now I am sorry the guy died, and his wife is very ill. Still, a normal person would read the label and either see the difference in the name or the fact that it said it was a parasite treatment for fish and start asking questions of their Doctor, veterinarian, or the person who sold the product and ask if it works on people. Or at the very least won’t kill people.

According to Business Insider, the dead main’s wife said,

“We saw Trump on TV — every channel — and all of his buddies and that this was safe. Trump kept saying it was basically pretty much a cure.” After being asked what her message was to the American public she said, “Oh my God, don’t take anything. Don’t believe anything that the president says and his people … call your doctor.”

“Please educate the people,” she added, according to audio of the conversation that Hillyard posted to Twitter. “It feels like, like my heart is broken and it’ll never mend. It’s just broke, dead. Like my husband. My husband is 68. We’re healthy. No underlying — no diabetes or lung issues. Nothing.”

Well, lady, you didn’t take what the President was talking about, you too something for fish, so don’t tell people about not believing the President because you earned yourself a Darwin Award. For those of you not familiar with the awards, they recognize individuals who have contributed to human evolution with actions so dumb they self-select themselves out of the Human gene pool.   Dear Darwin Award finalist, President Trump didn’t say to guzzle down aquarium cleaner. aquarium cleaner instead of medicine

The woman says that she remembered the name from something she had used to treat her koi, and they decided to mix it with some liquid and ingest it. Think about it, would anyone with an I.Q. above the “moron” level >49 ingest aquarium cleaner without their personal physician telling recommending it to them.   Many people use Chlorine to clean their pools, would people down a Chlorine tab because it sort of sounds like chloroquine?

The name “chloroquine” resonated with the man’s wife, who asked that her name not be used to protect the family’s privacy. She’d used it previously to treat her koi fish.

“I saw it sitting on the back shelf and thought, ‘Hey, isn’t that the stuff they’re talking about on TV?’”

The couple — both in their 60s and potentially at higher risk for complications of the virus — decided to mix a small amount of the substance with a liquid and drink it as a way to prevent the coronavirus.

“We were afraid of getting sick,” she said.

Afraid of getting sick, so they didn’t consult with their doctors and her husband got worse than sick—he got dead.

They both became extremely ill, feeling “hot and dizzy” within 20 minutes of ingesting the mixture. The woman said that she started vomiting, and her husband started having respiratory problems. She called 911, and she had difficulty telling emergency responders what she had consumed. Her husband died in the hospital, and she is in critical care.

Sadly, she lost her husband, but it’s not President Trump’s fault that she has a very low I.Q.

One Arizona news station has a news editor with a similar I.Q. because they got the story totally wrong. The radio station incorrectly said the President was pushing chloroquine phosphate..instead of chloroquine.

BREAKING: A Phoenix-area man has died and his wife was hospitalized after they ingested a COVID-19 home remedy. The substance, chloroquine phosphate, was recently touted by President Donald Trump as a possible coronavirus treatment. https://t.co/CT5Z2EBIfD

Perhaps the station made a mistake when eating lunch that day. Maybe they wanted to add salt to their food. But instead of putting Sodium Chloride on their food, they added Sodium Pentothal, also known as truth serum–their names are close bu their uses are different.

The Hill was particularly egregious in their tweet which was eventually deleted:

NBC News is the article cited at the beginning of this article, but the headline implies that the man ingested some sort of human medication.

An Arizona man died after consuming chloroquine phosphate to try to prevent #COVID19. Chloroquine is the drug touted by President Trump last week. It has not been approved for treatment of the Coronavirus. https://t.co/TSUnOW41nT

NBC News wants you to be careful about hearing things Trump did not actually say about a drug and then take a completely different drug (actually a fish tank cleaner) and without asking any medical advice from a doctor, or even doing a google search first, drink the cleaner.

A man in Arizona has died and his wife is under critical care after they took chloroquine phosphate to self-medicate for coronavirus.

Meanwhile, three people in Nigeria overdosed on the drug after Trump recommended it.https://t.co/e03oJUoJZh

Once again, getting the story wrong. As for the three in Nigeria, taking too much medicine. Their overdoses shouldn’t be traced back to the fact they took that medicine. They overdosed because they ingested more medication than they were supposed to take. Either the Doctor who prescribed the drug was an idiot and told them to take the wrong dose, or they were imbeciles themselves and didn’t listen to what their Doctor said.

Forbes is using the same photo for their story… and the same narrative.

After hearing Trump promote #chloroquine for #coronavirus during his televised press conference, a woman and her husband took a household version to prevent infection. He died; she’s in critical condition. "This is a heartache I'll never get over." https://t.co/0FwnpoyUqV

And of course, you can count on Buzzfeed, who published the debunked Steele Dossier to push the same story to “own Trump.”

"A man died and his wife needed critical care after they both took a drug meant for aquariums that contains chloroquine” https://t.co/Yj8xee1jrm

How is it that they’re all burying the lede here?

The President always says, “Fake News is the enemy of the people,” and he’s absolutely right.

These articles are being shared by Verified Twitter users as fact by people who are clearly just reading the headlines and seem to be oblivious to the whole aquarium cleaner part of the story.

The wife of an Arizona man who died after ingesting chloroquine phosphate – which Trump touted as a "very powerful" treatment – to protect against #coronavirus warned the public not to "believe anything that the president says" and rely on doctors instead. https://t.co/pPHNAEwRo1

But that’s what happens when you just read headlines.

Dr. Dena Grayson who unsuccessfully ran for Congress as a Democrat in 2016 tweeted out the incorrect story with a big warning light:

?As I warned, these anti-malarial drugs are associated with potentially FATAL side effects and should only be taken under close supervision of a doctor.#coronavirus #COVID19 #chloroquine #hydroxychloroquine https://t.co/kJpG3ZFupT

But Dr. Grayson, I agree taking the medicine without the close supervision of a doctor is bad. Some of the medication I take every day can throw me into a coma too much is taken.   So my medication is taken under a doctor’s supervision. I also have confidence that my doctor knows the difference between a Malaria drug, and something used to clean fish aquariums. Based on Dr. Grayson’s tweet she doesn’t know the difference. The couple she is referencing took was chloroquine phosphate, not chloroquine,

Is someone going to tell Dr. Grayson that she’s bitching about anti-malarial prescription drugs?

Do you know what else is apparently fatal, Dr. Grayson? Aquarium cleaner.

Maybe that’s why they have big warnings on it when you find it on the internet. 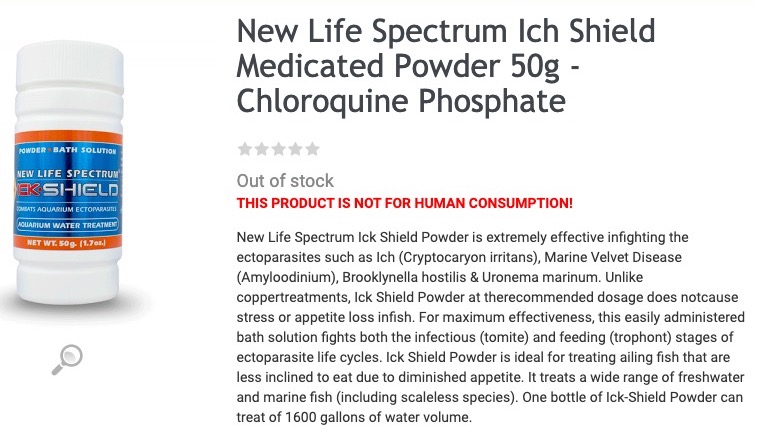 On Tuesday morning, I saw that CNN’s “Media Watchdog” Brian Stelter has retweeted this story that was related in a Twitter thread with no correction to the claim made that the couple ingested “chloroquine” and not a fish tank cleaner. 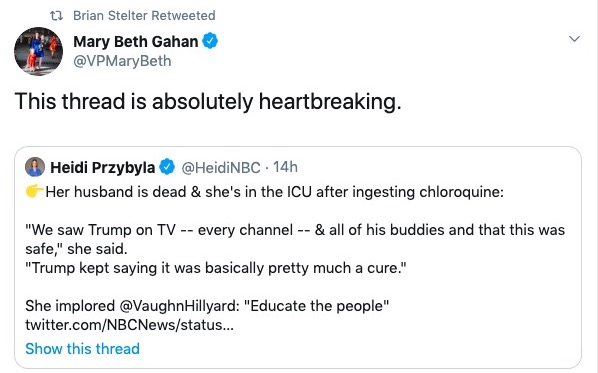 I am beginning to think that Trump Derangement Syndrome is just as dangerous to the United States as coronavirus.