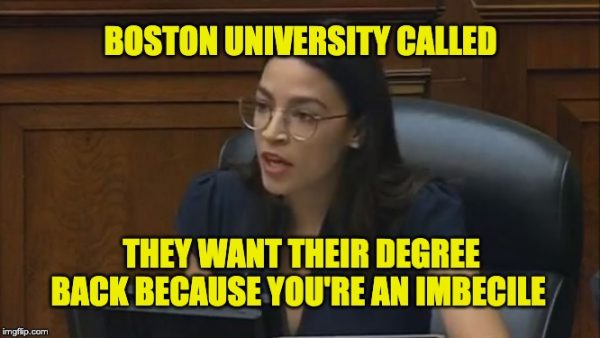 This isn’t a good look for Boston University’s Economics department. Congresswoman Alexandria Ocasio-Cortez(D-NY) received a bachelor’s degree in economics from Boston University in 2011. Rep. Occasional-Cortex has often touted her degree in international relations and economics as a sign that she isn’t the dumb bartender that the right portrays her as. The only problem with that plan is that she keeps speaking and revealing just how ignorant she really is. AOC Mixes Up Economists

When she first popped up on the radar, she appeared on Firing Line and discussed the “occupation of Palestine” by Israel. When host Margaret Hoover questioned her about it, she said that she wasn’t an expert on geopolitics despite her international relations degree.

AOC had merged the names to “Milton Keynes” which is actually a large town in England around 50 miles northwest of London and not an actual economist.

She was answering a question about a 4-day work week and said,

“It’s funny you should ask this — I was just reading today about how in 1930, famed economist Milton Keynes predicted that by 2030 GDP and technology would have advanced so much that it would allow everyday people to work as little as FIFTEEN HOURS a week and provide for their families.”

That is one helluva mix-up. It’s like confusing whipped cream with mayonnaise. EWWW mayonnaise on an ice cream sundae.

You can watch her longer answer giving a full-throated defense of the big-government interventionist Keynesian economic theory here:

Maybe Boston University really should ask her to hand back her degree as the jokes on the internet claim the school has done.

Meanwhile, AOC should take a moment to learn a thing or two and stop embarrassing herself and New York’s 14th Congressional District.

While this isn’t quite a defense of Milton Friedman’s Chicago school of economics, Hayek’s Austrian school is still a free-market model.

Check out this educational “rap-battle” between Keynes and Hayek: