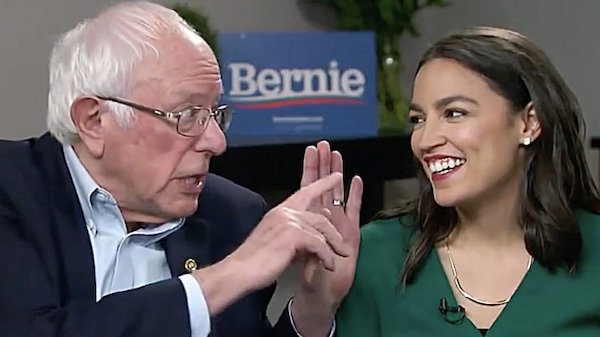 Is Alexandria Ocasio-Cortez’s calls for people to willfully aid in illegal immigrants’ efforts to circumvent law enforcement officials too extreme even for Bernie Sanders?  AOC ICE

A report from Vanity Fair seems to suggest that just might be the case. The report indicates that Team Bernie was not pleased with AOC following an Iowa campaign rally last month in which she continued to call for the abolishment of the Immigration and Customs Enforcement (ICE) agency, while also suggesting supporters should ‘tip-off’ illegals to their presence.

“Organizing is about tipping people off if you start to see that ICE and CBP are in communities, to try and keep people safe,” the New York socialist said in encouraging people to blatantly break the law.

What was I saying about how progressives probably doomed themselves because of their marriage with the whole left: “AOC’s team is also said to have had concerns about radio host Joe Rogan’s controversial unofficial endorsement of Sanders.” https://t.co/uRWBnnSYEs

“Ocasio-Cortez’s comments about the abolition of [ICE] and Customs and Border Patrol (CBP) were also seen by some within the Sanders campaign as going too far,” one source familiar with the messages said.

AOC’s extreme rhetoric was seen as “straying from Sanders’s stance on the issues [by] encouraging people not to cooperate with law enforcement agencies.”

Another thing that apparently irked Shakir – the fact that she didn’t mention his boss by name.

“The Sanders campaign was miffed that Ocasio-Cortez didn’t mention Sanders by name when she closed out a campaign event at the University of Iowa,” the report stated.

That said, of course, the attention seeker is going to make a campaign event about her – she’s angling for a Senate seat or even possibly the presidency.

"She's about as far from smart as anybody can possibly be!"

Retired ICE director Tom Homan absolutely eviscerates AOC for her "dangerous" & "idiotic" attacks. She encouraged folks to tip each other off during ICE raids, which ends up protecting, in many cases, violent criminals. pic.twitter.com/IlNOK4isI8

AOC’s calls for illegals and pro-illegal activists to not cooperate with law enforcement were shredded by former ICE Director Thomas Homan.

“She says you want to tip off the community to keep the community safe, that’s what ICE is doing,” Homan argued, adding he “can’t believe she can stand up on stage and make a statement like that and not have any repercussions from the House Ethics Committee.”

Well, the House is entirely on board with open borders and letting criminals run around unchecked, so …

“First of all, it’s an incredibly stupid statement she made,” he continued, “which doesn’t surprise me, because she’s about as far from smart as anybody could possibly be, but what she said is dangerous.”

Sanders, though supposedly dismayed by AOC’s comments, is likewise a fan of open borders, and has called for breaking up both CBP and ICE, as well as the full demilitarization of the southern border.

Decriminalizing illegal immigration by removing the means to police it is no less extreme than “tipping people off” when law enforcement tries to do their job.