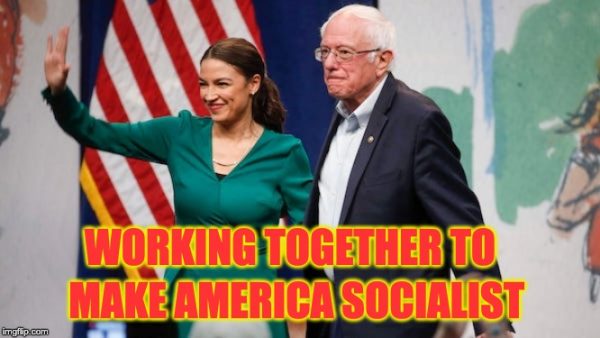 Talk about going rogue. Per Fox News, Freshman Democrat Alexandria Ocasio-Cortez has really upset her Democratic Party colleagues. Even though AOC has raised more money than any other House Democrat, she refuses to pay her party dues. Perhaps her negligence has to do with the fact she is funding the campaigns of her colleagues’ extreme left primary opponents in an attempt to turn the party even more socialist than it already is.  AOC Has Angered Democrats

Last quarter @aoc raised more than any Dem in the House. No call time, no wine caves. Average donation of $15.

Another Democrat was less diplomatic: “Deadbeat Cortez should pay her bills,” complained the Democratic source. “She’s always whining about people paying their fair share and here she is leaving her friends with the bill.”

AOC is refusing to give her share because the Party is supporting incumbents, instead of their progressive primary opponents. Ocasio-Cortez doesn’t care about her party, her chief concern is propping up the most radical socialist in the party, and finding similar radicals to run against incumbents. AOC wants to be able to implement her own radical policies and platforms. She has been raising and distributing money via Justice Democrats, an extreme left PAC.

But for party leadership, supporting primary opponents over incumbents is one of the worst things a member of congress can do.

Apparently, she is raising the cash with help from  Bernie Sanders.

Ocasio-Cortez is ramping up her donor base with the help of Sen. Bernie Sanders, I-Vt., whom she endorsed for president in October, to funnel money directly to progressive candidates.

Through social media posts and email solicitations, she’s activated her donor network to support her hand-picked candidates. In 2019 alone, she funneled more than $300,000 to candidates she’s endorsed by hosting online fundraising campaigns for them, according to records obtained by Fox News.

“I want to help frontline members by putting that money straight into their pocket,” Ocasio-Cortez said.

Rep. Gregory Meeks (R-NY) believes that AOC doesn’t have respect for the Democratic Party, nor an understanding that some districts are more conservative than others. It’s almost the same argument that people make about Susan Collins (R-ME) when she moves away from the GOP line. To maintain her seat, she has to make her constituents happy. Her voters are more liberal than the typical Republicans.

“DCCC dues are about supporting others because you want to be part of the team,” he said. “The goal is to be in the majority. And the goal is, when you are on a team I would think, to respect individuals whose districts are different than yours.”

Meeks said he can’t recall another time when sitting Democrats were actively trying to defeat other Democrats in Congress. Ocasio-Cortez is funding Cisneros in Texas and Newman in Illinois, who also has gotten financial backing from Rep. Ro Khanna of California.

“I would hope in the spirit of teamwork that we don’t see any further incursions with other members,” Meeks said. “I would hope at least it stops there.

Even worse than the fact that she is refusing to help the party, AOC is urging supporters to avoid giving to the DCCC either.

The @DCCC’s new rule to blacklist+boycott anyone who does business w/ primary challengers is extremely divisive & harmful to the party.

My recommendation, if you’re a small-dollar donor: pause your donations to DCCC & give directly to swing candidates instead.

The DCCC and AOC have opposing goals. The Democratic Congressional Campaign Committee’s job is to pack Congress with Democrats no matter where they stand on the conservative vs. liberal spectrum. AOC wants the House of Representatives to become a body of Democratic Socialists like Bernie and her.