Hey Alexandria Ocasio-Cortez, EVERYTHING Farts And It’s Not Getting Warmer 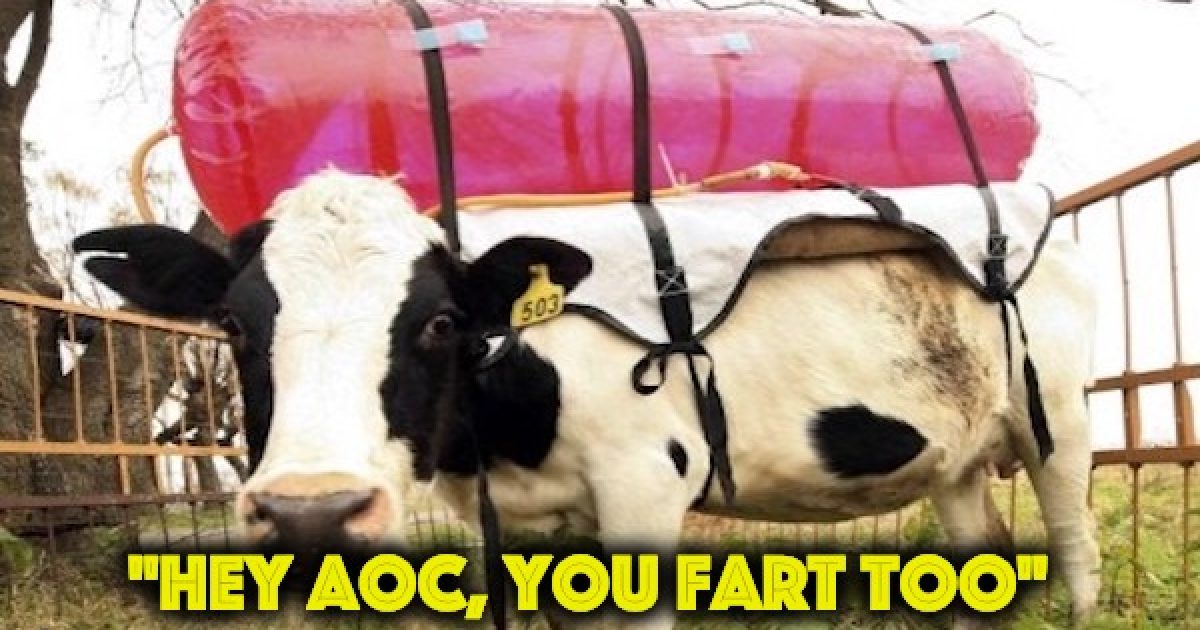 Alexandria Ocasio-Cortez’s  “Green New Deal” is more like a socialist manifesto.  She calls for everything from the elimination of air travel, an almost complete rebuilding of every structure currently standing in the United States today,  to redistribution of income,  and money for people who don’t want to work (and so much more). The strangest part of AOC’s “Green New Deal” is her attack on cows and their farts.

Get rid of farting cows?

My first thought was great, we’re all going to have a really big barbecue. I might even invite PETA.

But then, on second thought that’s really not fair— why is she picking on cows?

It is true that on average every cow releases 30 to 50 gallons of methane a day via farting and belching.  But growing up I shared a bedroom with my brother and I can promise you,  he answered the call of the wild burrito much more than the average cow (he might blame me but that wouldn’t be honest).

One point AOC doesn’t understand is that everyone and everything farts. Even Alexandria Ocasio-Cortez’ cuts the proverbial cheese (but I doubt she admits it). In fact, the average human butt toots its own horn 10 to 20 times a day

Farts, at least the microbes that cause the spontaneous eruptions happen to be good for us

Modern society views flatulence as a negative. This is unfortunate because in most cases it’s the byproduct of a beautiful thing — the intricate ecosystem of bacteria living in your intestines.

“It’s a complex ecology, with various organisms coexisting and thriving,” Kashyap says. “When a complex carbohydrate reaches your colon, some bacteria will break it down first, and then some of their byproducts will feed other bacteria. The whole community benefits from a single carbohydrate that you consume.”

And the cows are not alone, cats fart, even dogs fart (although sometimes when humans fire a stink torpedo, they blame their dogs). Maybe she should watch this short video:

Another thing AOC doesn’t understand is that even if we prevent backdoor breezes from cows, elephants, and even humans,  global warming will not be stopped. Neither will reducing CO2. You see the problem is that CO2 has been increasing, but the temperature has been relatively stable. In fact despite what you may have heard the earth hasn’t really gotten warmer. Take a look at the temperatures since the millennial, the temperature difference is less than two-tenths of a degree, and have fallen the past three years.

As pointed out by The Global Warming Policy Forum (GWPF)

“A big story at the beginning of each year is the release of the global surface temperature of the previous year. A big story certainly but not often a surprising one. Since the beginning of the century, it didn’t change much from year to year until the 2015/16 super El Nino came along. Then the temperature went up, as usual, and now it’s coming down again”

2018 was the fourth warmest year of the instrumental period (started 1850) having a temperature anomaly of 0.91 +/- 0.1 °C – cooler than 2017 and closer to the fifth warmest year than the third. But of course, there are those that don’t like to say the global surface temperature has declined. 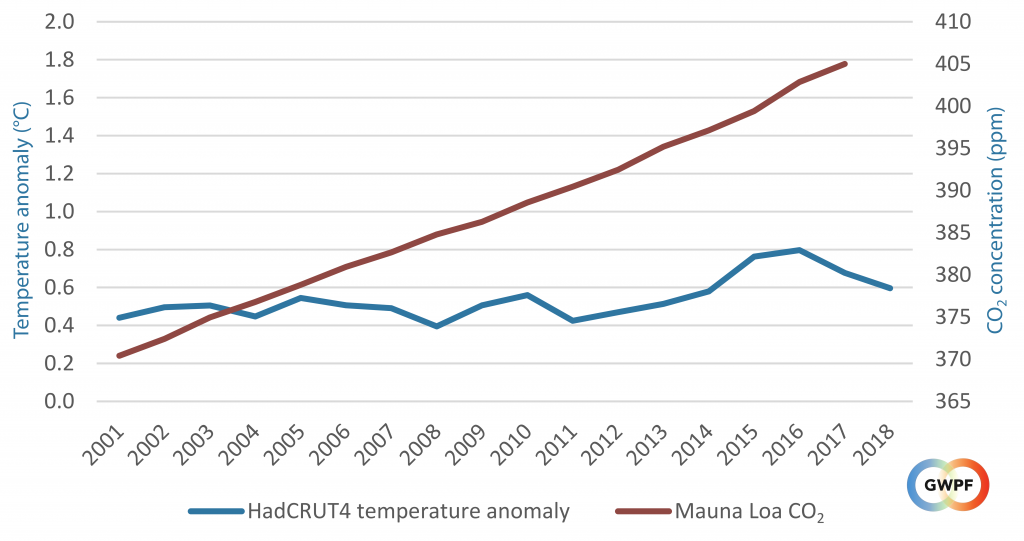 As Marc Morano, the man behind Climate Depot explains in his must-read book The Politically Incorrect Guide to Climate Change.

While such years as 2005, 2010, 2014, and 2015 were declared the hottest years by global warming proponents, a closer examination revealed that the claims were based on year-to-year temperature data that differs by only a few hundredths of a degree to up to a few tenths of a degree—differences that were within the margin of error in the surface data. And the satellite data disagreed with the surface datasets. When an El Niño–fueled 2016 was declared “hottest year,” the temperature rise from 2015 also failed to exceed the margin of error, or exceeded it just barely—depending on which of the multiple temperature datasets were reporting.

A 2017 analysis by astrophysicist David Whitehouse of the Global Warming Policy Foundation, said, “According to NOAA, 2016 was 0.07°F warmer than 2015, which is 0.04°C. Considering the error in the annual temperature is +/- 0.1°C this makes 2016 statistically indistinguishable from 2015, making any claim of a record using NOAA data specious.”

James Varney, writing at Real Clear Investigations, noted, “NOAA fixed the 2016 increase at 0.04 degrees Celsius. The British Met Office reported an even lower rise, of 0.01C. Both increases are well within the margin of error for such calculations, approximately 0.1 degrees, and therefore are dismissed by many scientists as meaningless.”

When one considers that CO2 levels are rising, but the temperatures are relatively consistent, the only logical conclusion is the climate change hypothesis is wrong. Well, either that or these poor cows are about to explode because they haven’t belched or played the butt tuba since the last time the world was supposed to end because computers couldn’t adjust to the year 2000.

As Marc Morano explained on Fox and Friends, the Green New Deal is simply a Green Raw Deal, and a big bowl of crazy (see video below):

Watch the latest video at foxnews.com