AOC Complained Dem Party Has No Standards: ‘They’ll Take Anybody the Cat Dragged In’

She Isn't Talking About Herself 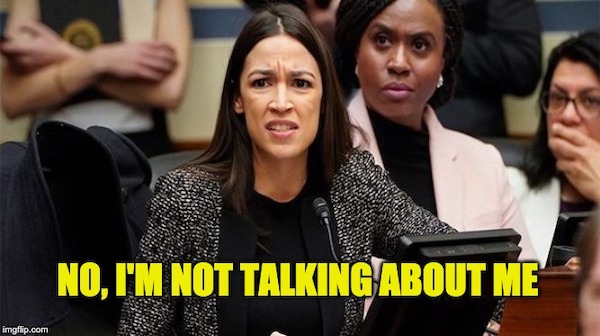 Rep. Alexandria Ocasio-Cortez, in an interview with New York Magazine, complained that the Democrat party will “let anybody who the cat dragged in” into the party.

To be sure, AOC’s whining is focused on allowing somewhat more ‘moderate’ members into the party who don’t precisely align with her extremist views.

“Democrats can be too big of a tent,” she lamented.

“They let anybody who the cat dragged in call themselves a progressive,” the New York socialist said. “There’s no standard.”

Alleging that the Democrat party has no standards may be the first honest thing Ocasio-Cortez has said in years.

Rep. Alexandria Ocasio-Cortez complained in an interview published Monday that Democrats nationwide can cultivate “too big of a tent,”.

“In any other country, Joe Biden and I would not be in the same party, but in America, we are.” https://t.co/a2giKcQwmH

Raising her ire, in particular, was former vice president Joe Biden, whom she fantasized in any other country wouldn’t be a member of the same party.

“In any other country, Joe Biden and I would not be in the same party, but in America, we are,” Ocasio-Cortez said.

Asked how she’d fit in as a congresswoman under a Biden presidency, she groaned, “Oh, God.”

AOC then claimed Biden was so far to the right of her that he actually constitutes a Democrat version of the Tea Party.

“What people don’t realize is that there is a Tea Party of the left, but it’s on the right edges, the most conservative parts of the Democratic Party,” she suggested. “So the Democratic Party has a role to play in this problem, and it’s like we’re not allowed to talk about it.”

Understand what she’s saying here – Moderate voices are a ‘problem’ in her little socialist view. AOC is complaining about people within her own party having different viewpoints.

Ocasio-Cortez says Biden and other Democrats are closer to being right-winghttps://t.co/9ts47ERg6n

And bow, they have.

Even the man she claims is closer to a Tea Party member, Joe Biden has adopted her unhinged extremist rhetoric.

You needn’t look any further than the impeachment fiasco to realize that Nancy Pelosi and the Democrats are so petrified of a former bartender that they’ve started dancing for her when it comes to AOC’s demands. ​

Biden has long been the object of AOC’s disdain, despite his new extreme antics. You see, he hasn’t done enough for the environment in her eyes.

This past May, she took a shot at Biden, railing that she would “be damned” if he thinks a “middle of the road” approach to global warming is acceptable.

AOC has also openly wondered whether or not the former vice president’s age was affecting his mental capacity. Biden is 77. The raving loon she has deemed acceptable to support for the presidency in 2020, Bernie Sanders, is 78.