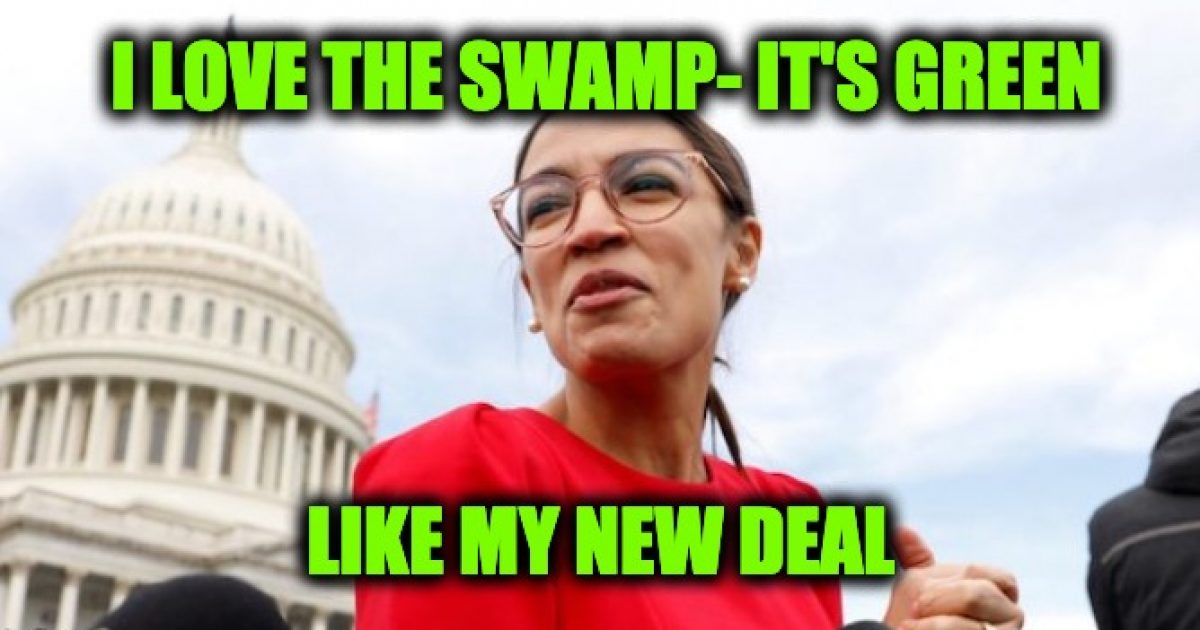 Boy oh boy, that did not take long. Despite AOC’s lack of knowledge of significant issues and tendency to always say the dumbest thing at the worst time, Freshman Democratic Socialist  Alexandria Ocasio-Cortez seemed to have an idealism about her ignorant policies, but after only four months in Washington D.C., she has become a typical swampy politician. As first reported by the NY Post AOC pulled a campaign fundraising bait and switch as participants in a fun run she organized were unaware their registration fee was going towards her campaign.

The event on Saturday was billed as a family fun run supporting Ocasio-Cortez’s Green New Deal,’ but a spokesman later revealed it was a campaign fundraiser.

“The site says it’s to benefit her environmental plan,” said one supporter who would not give his name. “If it is going to go directly to her campaign they should have said so.”

But many of the 400 runners didn’t realize their $30 registration fees were going directly into the lawmaker’s campaign coffers.

“We’re getting together for our own health, for our planet’s health … and to fight for the Green New Deal together,” the freshman Democrat told the participants before they set off.

Environmentally conscious supporters — who jogged through Astoria Park alongside a beaming, strolling AOC — believed their money was going to help save the planet.

Sorry, Brian but you got scammed.

The saddest part is that 99% of them don’t realize they were played for fools and the few who do know it, will justify it by saying Alexandria Ocasio-Cortez didn’t mean to make it that hard to figure out it was a donation directly to her campaign.

Another bait and switch. One of the oldest tricks in the Socialist hand book. Thanks AOC. The next trick is the Green New Deal switched to Bankrupt USA. Then Medicaid for all switch to after age 68 no treatment. Free stuff cost to much.

Imagine that! This is all a big popularity show for @AOC that’s pushing a leftist political agenda. If @RepAOC was truly concerned about the people’s issues, she would do a lot more homework (e.g. about #socialism), before opening her foot-shaped mouth. #PhoneyBaloney

Young idealistic politicians, they get corrupt so young so fast pic.twitter.com/tympp2gVCJ

The more we hear about or from AOC, the more her true self is revealed. She is a con artist. “Smiling faces sometimes they don’t tell the truth” https://t.co/xi293LWlow

She’s not just a con artist, she is a Democrat (is that redundant?)

She is a “master manipulator” Psychological manipulation is a type of social influence that aims to change the behavior or perception of others through indirect, deceptive, or underhanded tactics. By advancing the interests of the manipulator, often at another’s expense.

Another generation of corrupt politicians exploiting her congressional office for her own personal gain. The corruption worsens with time. An example of how politicians go from bartenders to millionaires in a few short years.

Another bait and switch. One of the oldest tricks in the Socialist hand book. Thanks AOC. The next trick is the Green New Deal switched to Bankrupt USA. Then Medicaid for all switch to after age 68 no treatment. Free stuff cost to much.

AOC proves again that her Green New Deal was misnamed, it is a green new steal.