AOC Accused Kayleigh McEnany Of Racism, Ends Up Looking Like An Idiot 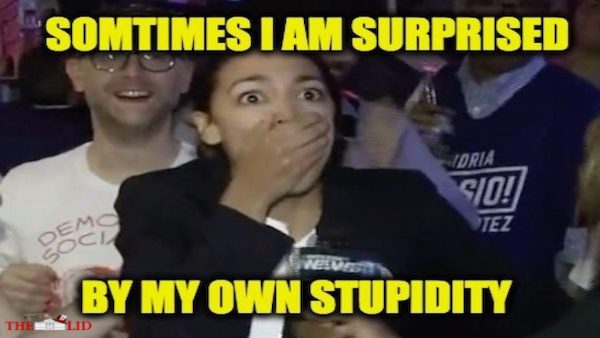 AOC, also known as Congresswoman Alexandria Ocasio-Cortez (D-NY), was upset at Kayleigh McEnany after her press briefing today. She accused the WH Press Secretary of dissing her in a racist way.  But as usual, Ms.Ocasio-Cortez ran her mouth before using her feeble mind and ended up with her foot in her mouth. AOC accused Kayleigh McEnany

During the presser Kayleigh McEnany was asked about the defunding the police movement, she responded with:

Jake Sherman of Politico tweeted AOC to tell her she was mentioned at the presser, and instead of getting the full quote, she flew off the handle:

.@PressSec wouldn’t be the first person to mistake a women of color for having a lower position or title than she does, but Kayleigh – in case you haven’t picked up a newspaper in two years, I’m a Congresswoman.

.@PressSec wouldn’t be the first person to mistake a women of color for having a lower position or title than she does, but Kayleigh – in case you haven’t picked up a newspaper in two years, I’m a Congresswoman. https://t.co/3FRHo7dpTL

Of course, McEnany did say that AOC was a Congresswoman. Something that Alyssa Farrah WH, Director of Strategic Communications, pointed out in a tweet.

she literally called you Congresswoman, @AOC.

Kayleigh McEnany also stuck up for herself, tweeting, “Read the transcript, Congresswoman, @AOC.” That assumes AOC can read with her foot planted firmly in her mouth.

Ocasio-Cortez has been a member of Congress for almost two years and has picked up Joe Biden’s disease saying the stupid thing at the wrong time.  The difference between the two is that Biden is senile, and AOC is more mean-spirited.