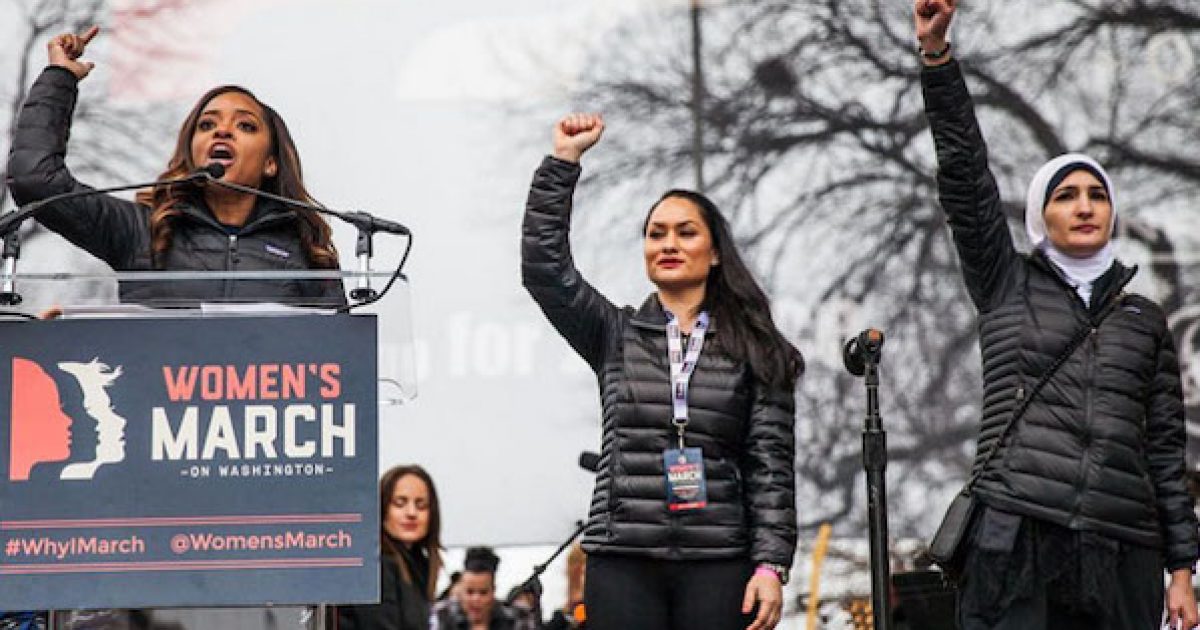 The rest of the world is finally catching up with what this site has been screaming about since March 2017, the Women’s March organization is run by Anti-Semites. Marches in Seattle and Chicago have been canceled because of the Jew-hatred of the leaders and their connections to Farrakhan’s “Nation of Islam.” While their links to the lowlife Farrakhan is one piece of evidence, the Antisemitism of three Women’s March leaders Linda Sarsour, Tamika Mallory, and Carmen Perez go way beyond their association with Louis Farrakhan.

Per Newsweek,  “the decision to cancel the event also comes shortly after the Chicago branch of the Women’s March hit out at leaders of the national initiative over their ties to the Nation of Islam, a religious group that has been condemned by the Southern Poverty Law Center as a designated hate group over its “deeply racist, anti-Semitic and anti-LGBT rhetoric,” with its primary teaching promoting black racial superiority.”

Take for example NY Senator Kirstin Gillibrand’s good buddy Linda Sarsour. Sarsour Claims Zionists cannot be feminists. “It just doesn’t make any sense for someone to say, ‘Is there room for people who support the state of Israel and do not criticize it in the movement?’ There can’t be in feminism. You either stand up for the rights of all women, including Palestinians, or none. There’s just no way around it,” Sarsour said. Zionism is the belief that the Jewish people should have a right to self-determination, And if Sarsour believes that she should stand up for all women, why does she leave out Jewish women and their rights to self-determination.

And if Zionists cannot be feminists, Sarsour should tell that to my friend Dr. Phyllis Chesler who is not only a Zionist but an internationally recognized leader of the feminist movement

She also believes the anti-Semitic canard that Jews control the media. Speaking at an event at the New School, called “Anti-Semitism and the Struggle for Justice (there are some things you just can’t make up), Sarsour complained how the Jewish controlled media was targeting her and Farrakhan:

Sorry, Linda but if we managed the media, Jew-haters such as Al Sharpton and Joy Reid wouldn’t have TV shows, and I would. She also mentioned that she remains  “a very strong staunch supporter of boycott, divest, sanctions movement.”

The Boycott, Divestment & Sanctions (BDS) movement is an anti-Semitic  initiative that uses various forms of public protest, economic pressure, and court rulings to advance the agenda of permanently destroying Israel as a Jewish nation-state. When some people complained about her pro-BDS stand Sarsour brought up another anti-Semitic canard, suggesting that they had a divided loyalty between the U.S. and Israel

Accusing Jews of dual loyalty is one of the oldest and most pernicious antisemitic tropes. No surprise to see it coming from @LSarsour. How long will progressive leaders continue to look the other way in the face of this hate? pic.twitter.com/cY6Mg7KhB4

The Democratic Party protected anti-Semite also pushes the false story that  “Palestine existed before the State of Israel.”

Palestine existed before the State of Israel. #FactCheckThat

Not only was the Kingdom of Israel created 1,300 years before the Romans change the name of the Jewish State of Judea to Palestine, but it was around 1,800 years since the Muslim faith was founded. Sarsour must be bad at math which is really pathetic because it was a Muslim named Muḥammad ibn Mūsā al-Khwārizmī who gets credit for creating algebra (he also created trigonometry which is why I will forever hate him).

While it’s true that another friend of NY Sen. Gillibrand’s and Women’s March organizer Tamika Mallory was at Louis Farrakhan’s hate-fest this past March, AND she’s been a fan of Farrakhan for a long time.  If that was her only issue she could run for Minnesota Attorney General like Keith Ellison.

At the end of May, Tamika Mallory spoke via video at an event hosted by her trip’s sponsor, the Center for Constitutional Rights, Mallory didn’t criticize Israeli policies, like Sarsour she took the anti-Semitic stance that the very creation of Israel was a human rights crime (see the explanation from the state department above).

When Starbucks planned its afternoon of anti-bigotry training, it included the progressive politics organization The Anti-Defamation League (ADL)  as a contributor. But Tamika called for a boycott of Starbucks for including the very liberal ADL which advertises itself as a Jewish human rights group. Mallory wanted Starbucks to include organizations such as Jewish Voice for Peace (JVP) which was named by the ADL as one of the ten most anti-Israel organizations in the country, and the now infamous Bend The Arc. The other groups she recommended were just as bigoted as JVP.

Despite that the ADL puts progressive politics before its mission, it is still well known as an organization that protects all human rights, not just the rights of Jews, but all races and religions. So the only reason for Mallory to object is the ADL’s Jewish history.

Carmen Perez’s Jew-hatred became an issue this weekend when Jewish co-founder of Women’s March movement said she was forced out because by Perez and Mallory because of her Jewish Heritage.

Vanessa Wruble, a Brooklyn-based activist, said she told the group that her Jewish heritage inspired her to try to help repair the world. But she said the conversation took a turn when Tamika Mallory, a black gun control activist, and Carmen Perez, a Latina criminal justice reform activist, replied that Jews needed to confront their own role in racism.

(…)At that first meeting, Ms. Wruble said, they seemed to want to educate her about a dark side of Jewish history, and told her that Jewish people played a large role in the slave trade and the prison industry.

“I was taken aback,” said Ms. Wruble in her first extensive interview about her experience organizing the Women’s March. “I thought, ‘Maybe there are things I don’t know about my own people.’”

She said she went home that night and searched Google to read about the Jewish role in the slave trade. Up popped a review of “The Secret Relationship Between Blacks and the Jews,” a 1991 book by Mr. Farrakhan, which asserts that Jews were especially culpable. Henry Louis Gates Jr. [yes the one that Obama protected]  a Harvard professor, has called the book the “bible of the new anti-Semitism.”

After that first march, the hatred continued

At a meeting days after the march, an argument broke out between Ms. Wruble and the other leaders.

Ms. Mallory and Ms. Perez began berating Ms. Wruble, according to Evvie Harmon, a white woman who helped organize the march, and who attended the meeting at Ms. Mallory’s apartment complex.

“They were talking about, ‘You people this,’ and ‘You people that’ and the kicker was, ‘You people hold all the wealth.’ I was like, ‘Oh my God, they are talking about her being Jewish,’” said Ms. Harmon, whose account was first published by Tablet. “The greatest regret of my life was not standing up and saying ‘This is wrong.’”

Another Women’s March founder Rasmea Yousef Odeh is no longer in America, she was deported in October 2017 for concealing her murder/conviction of two Israeli college students.

Rasmea Yousef Odeh is one of eight women who organized the Women’s March  2017 event, A Day Without Women. She’s a woman who spent a decade in an Israeli jail for her involvement in two terrorist bombings made while she was a member of the Popular Front for the Liberation of Palestine (PFLP). One of those attacks, a 1969 bombing of a Jerusalem Super-Sol Market killed two Hebrew University Students Edward Joffe and Leon Kanner while they were shopping for groceries.

The Palestinian born Odeh was sentenced to life in prison for being the ringleader behind the Super-Sol bombing as well as an attempt to blow up the British Consulate in Jerusalem (the bomb was found and disarmed before exploding). After spending ten years in an Israel jail Odeh was released with 77 other terrorists in an exchange with the PFLP for an Israeli soldier captured in Lebanon.

There you go, Louis Farrakhan or not the Women’s March is run by a cabal of antisemites. So If you really oppose hatred put your pink pussy hats (and pink pussy yarmulkes) away and find an inclusive group to support.