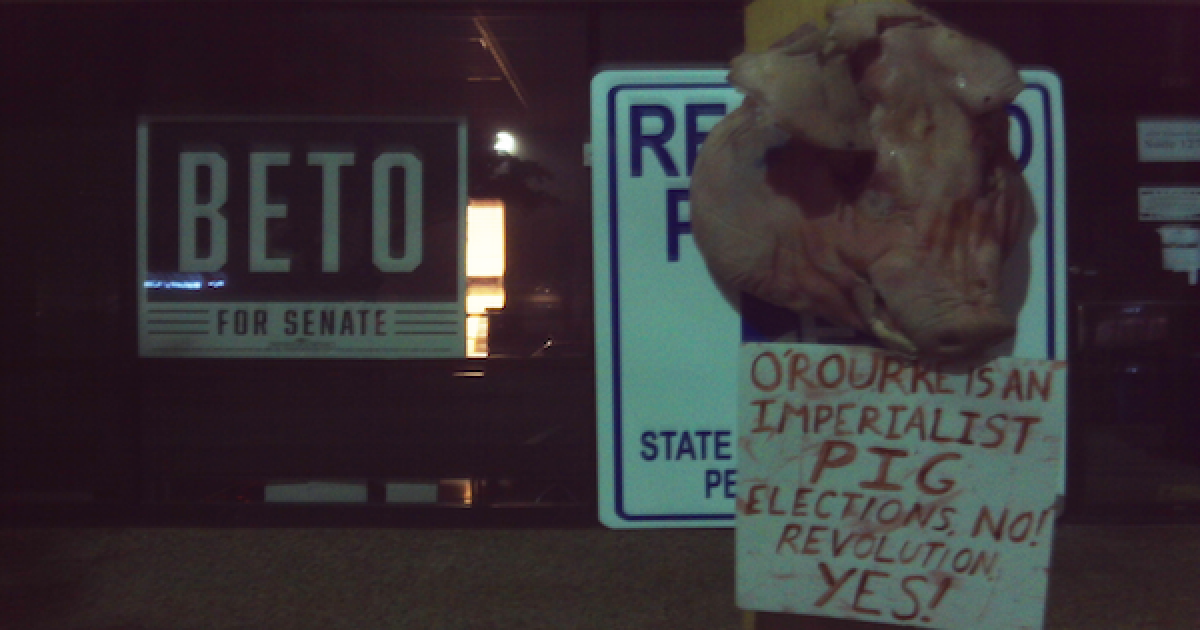 An Antifa group in Texas placed severed pig heads at polling stations and campaign offices in Austin along with signs calling for revolutionary violence.

The pig carcasses and the violently worded signs were placed at the offices of Republican Senator Ted Cruz, but also at his Democrat opponent’s office, according to images posted to Twitter.

The graffiti was supposedly created by a communist group calling itself Red Guards Austin. One of the signs read, “Cuz and O’Rourke are imperialist pigs. Elections, NO! Revolution, Yes!”

After attacking five separate GOP offices, Antifa has escalated their extremist activities by placing severed pig heads at multiple polling locations and campaign offices in the Austin, TX area. This comes directly on the heels of the media accusing Republicans of “seizing” on the “angry mob” mantra in order to generate a better turnout for the midterms.

The Red Guards Austin recently shared a blog post with their 8,000 Facebook followers in which they commemorated Mao Zedong’s brutal communist revolution that resulted in millions of people being slaughtered. In this blog post, they called for a boycott of the “bourgeois elections” and advocated for organized revolutionary violence.

They ended this blog post as they usually do with overt calls for armed violence, “Boycott the Bourgeois Elections! Elections, no! Revolution, yes! The ruling class will rule no more! Revolution, Peoples War!”

Do not fool yourself, whoever you vote for an imperialist pig will win at the peoples expense. Image supplied by…

The Red Guards of Austin last month shared on Facebook an image of Senator Ted Cruz and his Democrat rival Beto O’Rourke as a “Homophobic Imperialist Pig” and “Zionist Imperialist Pig,” respectively.

If this isn’t mob violence what is it?

Violence and intimidation,  this is what’s happening to the political discourse in America. It’s only happening thanks to the liberal side of the aisle. Conservative/Republican leaders are calling on everyone to calm down. Liberal/Democratic leaders are silent, and their silence makes them complicit in the upsurge in liberal violence and vandalism.