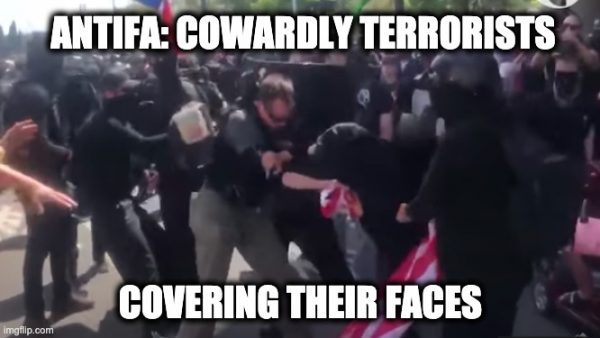 On Sunday, President Trump said the United States will designate Antifa as a “terrorist organization.”  The announcement, which was made on Twitter, came after several nights of violent riots and looting allegedly done in the name of George Floyd.

“The United States of America will be designating ANTIFA as a Terrorist Organization,” he tweeted.

The United States of America will be designating ANTIFA as a Terrorist Organization.

Trump has alleged that the violence was “being led by Antifa and other radical groups.” Antifa, short for anti-fascists, is an umbrella term for far-left-leaning militant groups that resist neo-Nazis and white supremacists at demonstrations.

Attorney General William Barr has seemed to echo Trump’s assertion, saying the violent incidents in Minneapolis were driven by groups using “Antifa-like tactics.” Barr vowed that federal prosecutors across the country would use federal riots statutes to charge protesters who cross state lines to participate in violent rioting.

Police in many areas responded with tear gas and rubber bullets.

“Looting, destroying personal property, and violence cannot be tolerated. Antifa seized upon a movement of legitimate grievances to promote violence and anarchy, working against justice for all. The President is right to recognize the destructive role of Antifa by designating them domestic terrorists,”

Cassidy’s support was not surprising after all, in July 2019, Sen.Cassidy and Sen. Ted Cruz (R-TX) introduced a resolution in the Senate to condemn the violent acts of Antifa and to designate the group a domestic terror organization.