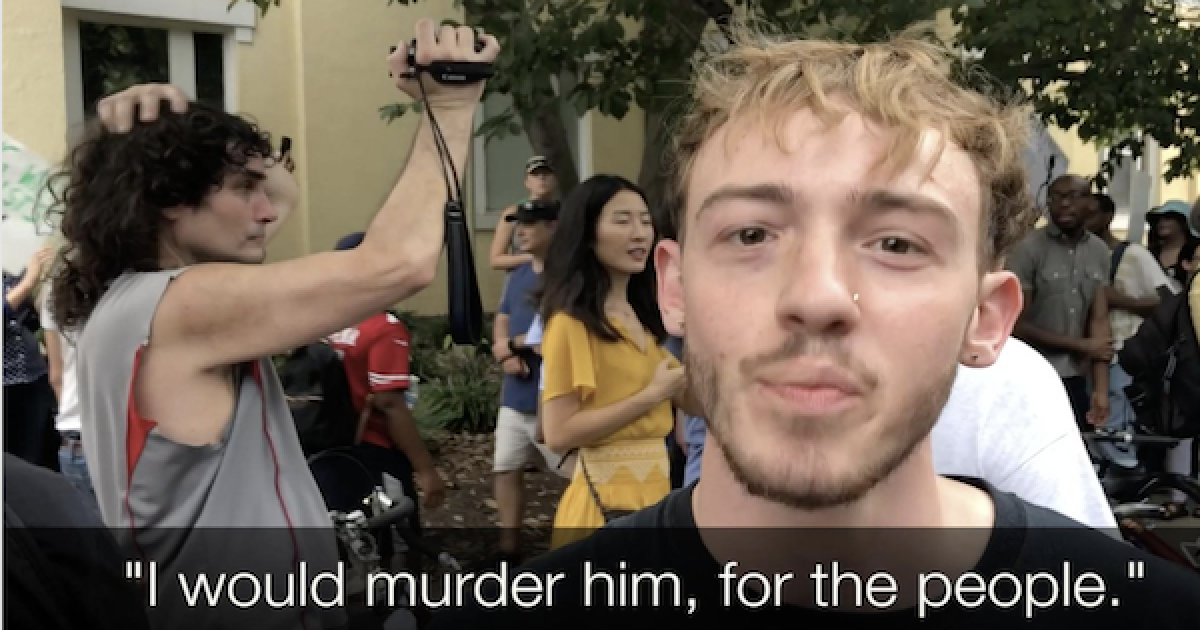 Antifa activists counter-protesting the ‘Unite the Right 2’ rally across from the White House on Sunday spoke on camera to Daily Caller reporter Benny Johnson, bluntly stating they want to murder President Donald Trump. “Do him like Gaddafi. Which is a reference to the Libyan leader who was dragged into the street, beaten, sodomized with a bayonet, before he was shot several times as he shouted for his life.

I have no doubt there will be real attempts on our Presidents life. These thugs are lunatics and are being cheered on and supported by Liberals and George Soros.

‘Do Him Like Gaddafi’ — Antifa Protesters Caught On Video Threatening To Kill The President https://t.co/AEFFkF7jsX pic.twitter.com/ABVCaS2jwM

Sunday afternoon, on the one year anniversary of the Charlottesville riots, progressives, anarchists, black bloc thugs gathered together as so-called “Antifa” again to counter-protest a gathering of white supremacists in Washington, D.C. The leftist protesters far outnumbered the white supremacists, and masked members of the violent Antifa group could be seen everywhere.

Many in the protest marched under the banners of ‘Peace’ and ‘Love Trumps Hate’ while chanting ‘Love, not hate. That’s what makes America Great.’ The armed, masked Antifa members and the chants of “peace and love” seemed antithetical.

I decided to ask the protesters what they would do were they to meet president Trump. Specifically, I asked “If Donald Trump showed up here, what would you say or do?” The answers I received stunned me. In my short time at the rally, approximately one hour, half a dozen protesters looked into my camera and threatened to physically harm or “murder the president.”

Some said they wanted to “do him like Gaddafi” in reference to the Libyan leader that was dragged into the street, beaten and murdered by his own people. More

This is serious stuff so where is the Secret Service? These thugs should be arrested.

Political civil protest is one thing..to threaten the @potus is sedition and treason. @@secretservice
‘Do Him Like Gaddafi’ — Antifa Protesters Caught On Video Threatening To Kill The President https://t.co/M6prydD1Vz via @dailycaller

I hope by now the secret service has him and are walking him to GITMO, give him a life sentence,

One reply got a little personal

Hey Kid………….one of your ears sticks out further than the other one

Time for a Batman Reference?

Is it just me or do the AntiFa people sound like Bane?

Report his repulsive little ass to the Secret Service.

How does How does Chris know if the guy’s backside is repulsive? Just asking.

In a later post, Johnson reported that the  Secret Service is now “aware” of the threats and are “investigating” the progressive protesters, adding they cannot further comment on “protective intelligence investigations” as a matter of policy.

Daily Caller’s Benny Johnson asked more Antifa members what they would do with Pres. Trump and the answers were just as repulsive. Click HERE to watch the video.