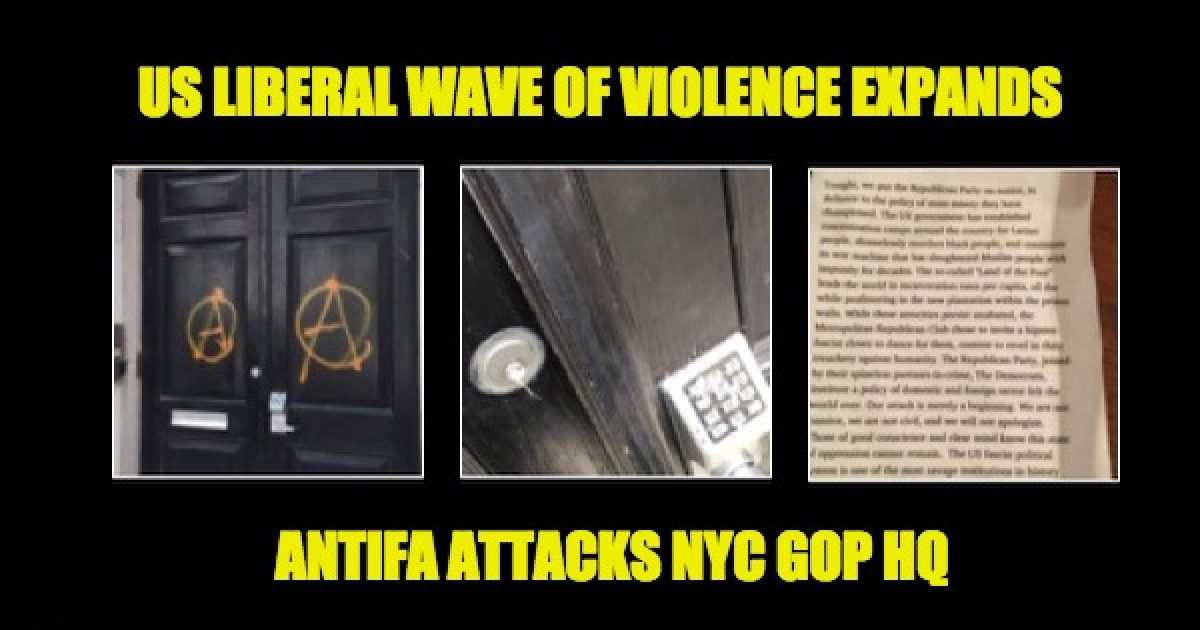 Antifa attacked the New York City Republican headquarters at the Metropolitan Republican Club was vandalized Thursday evening, and promised there’s more to come. Yes, there are some Republicans in NYC.

It happened around 1:30 a.m. at the location on East 83rd Street on Upper East Side, where windows were broken, doors were spray-painted, and glue was put in the locks and on the handles. A threatening message was also left at the scene, telling Republicans the “attack is merely beginning.”

The attack at the Metropolitan Republican Club on East 83rd Street near Lexington Avenue appeared to be at least partly tied to the scheduled appearance of right-wing provocateur Gavin McInnes at the club Friday night.

McInnes, a co-founder of Vice Media, heads a right-wing group called the Proud Boys, which has been characterized as a hate group by the Southern Poverty Law Center.

Of course, the Southern Poverty Law Center believes that every observant Christian is part of a hate group. They even falsely labeled as a hater, a Muslim fighting extremism in his faith.

Kerry Picket of the Daily Caller posted the text of the note Antifa pasted to the GOP office door:

Tonight, we put the Republican Party on notice, in defiance to the policy of mass misery they have championed.

The U.S. government has established concentration camps around the country for Latino people, shamelessly murdering black people, and continues its war machine that has slaughtered Muslim people with impunity for decades. The so-called “Land of the Free” leads the world in incarceration rates per capita, all the while profiteering in the new plantation within the prison walls.

While these atrocities persist unabated the Metropolitan Republican Club chose to invite a hipster fascist clown to dance for them, content to revel in their treachery against humanity. The Republican Party joined by their spineless partners in crime, the Democrats institute a policy of domestic and foreign terror felt the world over.

Our attack is merely a beginning. We are not passive, we are not civil, and we will not apologize. Those of good conscience and clear mind know this state of oppression cannot remain. The US fascist political system is one of the most savage institutions in history and we will combat it relentlessly until all are free of American barbarism.

The NYC GOP (officially known as the Met GOP) responded to the attack via Twitter:

Republicans are a minority party in NYC by a wide margin, and while most city residents are respectful of our activities, our grassroots actions are often met with hostility. Last night's shameful attack by Antifa cowards represents a tragic new low. (2 of 4)

Sadly this is only the most recent example of leftist violence and aggression against the Conservative Movement. (3 of 4)

But rest assured that we will not be intimidated by violence, threats, or hate speech. We will continue to fight for freedom of speech and liberty here in New York City and all across this great nation. #NYC #nycvotes #Election2018 #gop #Republican #RepublicanParty

Liberal big shots such as Rep. Maxine Waters, Sen. Sparticus Booker, Loser Hillary Clinton, and even House minority leader Nancy Pelosi have incited rank and file liberals to commit actual acts of violence. And celebrities such as Kathy Griffin, Madonna, Robert De Niro, and Johnny Depp add calls for political violence. But not once! Not one liberal leader has called for their left-wing colleagues and supporters to calm down.  Which is why the GOP has released this ad.

Violence and intimidation,  this is what’s happening to the political discourse in America. It’s only happening thanks to the liberal side of the aisle. Conservative/Republican leaders are calling on everyone to calm down. Liberal/Democratic leaders are silent, and their silence makes them complicit in the attacks