Antifa Riots On Inauguration Day In Portland And Seattle 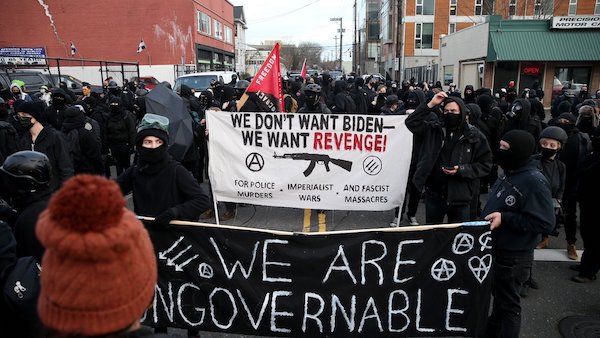 The leftist media has spent the last two weeks warning of Inauguration Day riots in state capitols and for a change they were correct—partially.  The violence came from the LEFT, not the right as they predicted. There was Antifa violence in Portland and Seattle. In Portland Antifa even attacked the DNC office (after attacking the police). Antifa Inauguration Day violence

You woke up on Thursday morning and not much changed, other than Joe Biden being sworn-in as president of the United States. As sad as it sounds, Donald Trump is now a former president. Socialist Antifa is still doing its violent thing, causing mayhem; throwing tantrums, acting like fascists in the name of anti-fascists How does new POTUS, the spineless, Joe Biden feel about this taking place on the day of his inauguration? It is doubtful that we will ever know.

As usual, the cowardly Antifa covered their faces as they attacked. In Portland, they marched under a banner saying, “We don’t want Biden. We want revenge for police murders, imperialist wars, and fascist massacres.”

Here’s some footage from Portland…

Hey guys: it’s a peaceful protest in Portland by mythical Antifa as they hold signs that say, “We don’t want Biden – we want revenge” with an image of an automatic rifle beneath it.

Why? Because they can. pic.twitter.com/kcLTlU3cEx

Portland: Watch shocking footage of #antifa smashing up the Democratic Party of Oregon headquarters. They bring weapons while their comrades use umbrellas to block surveillance video. Video by @Julio_Rosas11. #PortlandRiots pic.twitter.com/KdNNRgIEV0

Happening NOW in Portland.?
Antifa is smashing out the widows of The DNC headquarters.
They are now a group that the DNC cannot control.
Who didn't see this coming?
?? pic.twitter.com/K35vVoGtFh

Does anyone think the leftist media will make a big deal out of this? Will President Biden say that it was wrong as part of his call for unity?  Or does he still believe Antifa is “an idea, not an organization” like he said during one of his debates with President Trump?

Check out this cop being surrounded in Portland:

Portland: A police officer was surrounded by a mob of #antifa as he tried to confiscate their weapons. #PortlandRiots https://t.co/JpqaLx17Pt

Denver: Troopers at the state Capitol appear to retreat or leave as #antifa threaten them away. pic.twitter.com/idjzold6rL

And let’s not forget about Seattle:

It can’t be considered an official violent leftist event without burning the U.S. Flag.

American flags are burned on the streets of Seattle as part of tonight’s J20 Direct Action #Seattle #SeattleProtests #J20 pic.twitter.com/DTL9CzEHnF

VIDEO: AIR4 was LIVE over Downtown Seattle as anarchists blocked traffic and a lit a large American Flag on fire in the middle of this intersection. #KOMONews pic.twitter.com/AZJMru04tT

With the renewed violence particularly the attacking of the DNC in Portland, I wonder if Rep Jerrold Nadler (D-NY) still believes that Antifa violence is only “a myth that’s only being spread in Washington, D.C.” Hey Jerry your myth is spreading violence across America!

The Democrats and their MSM sycophants still refuse to admit that much of violence in America during the past year has come from their side of the political aisle.

There is much more about the Seattle riot in a post by Ed Morrissey at Hot Air. That’s where I learned that Antifa attacked a historic location (well historic to grande latte lovers), the first Starbucks.

Starbucks isn’t just a casual example of collateral damage. The groups loosely known as Antifa these days have descended from the 1999 World Trade Organization rioters in Seattle, who caused days of unrest to demonstrate against globalization. Starbucks has always been a potent symbol of the radical left’s villains, and a frequent target of its rioters.

I also learned from Ed’s post at Hot Air that there were other cities that saw leftist Inauguration Day violence, so click here and go to Hot Air and read  Seattle Antifa Celebrates Biden Era By … Attacking Original Starbucks In Riot