Antifa Cowards In Masks Beat An ‘Old Guy’ With Crowbars 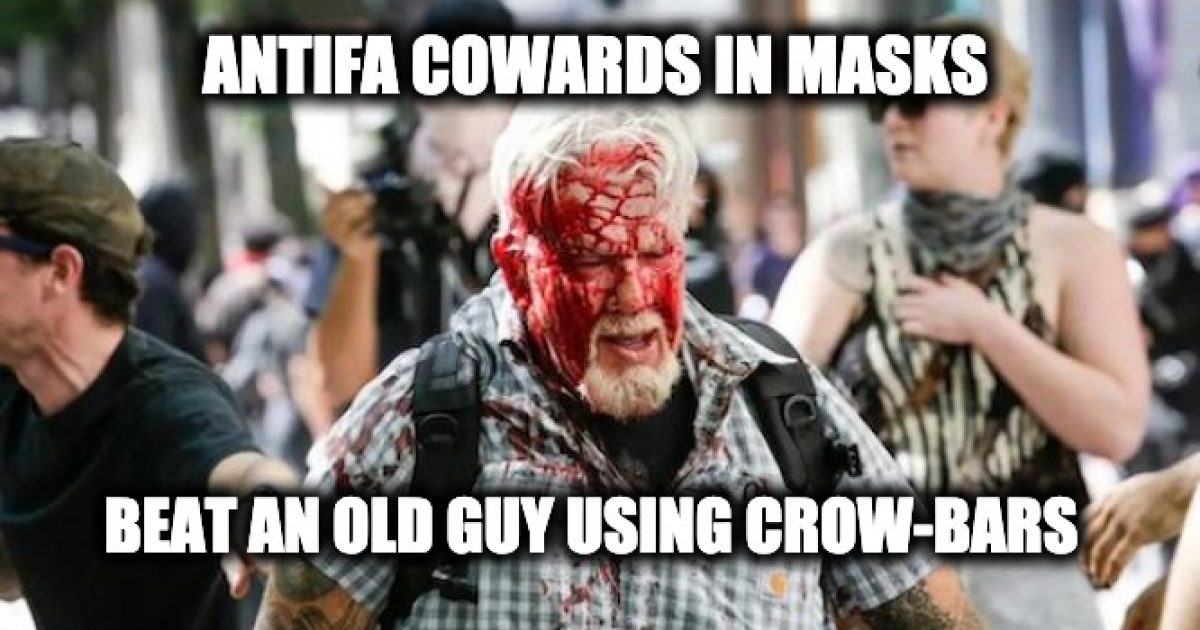 Saturday’s Antifa activities in Portland, OR were clearly out of hand, or as reports indicate were allowed to get out of hand.

Conservative Journalist Andy Ngo who had to be sent to the Hospital with a brain bleed thanks to the Antifa Terrorists.  But he wasn’t their only victim

Update to @MrAndyNgo supporters — he is being admitted to the hospital overnight as a result of a brain bleed. You sick “journalists” and other hacks gloating about this should be ashamed. As for the rest, please pray for @MrAndyNgo who we need back in health — brave man!??????❤️ https://t.co/XYVy4EbIzv

A new report has surfaced that Antifa thugs also beat an elderly man with a crowbar.

The above video was posted to LiveLeak on Sunday and was confirmed by two other sources.

Portland Antifa beats an elderly man bloody with a crowbar. As another man attempts to help, he is hit in head with crowbar then sprayed in face with mace.

And here is one from The Portland Tribune:

Authorities said “multiple assaults” were reported, and the demonstrators’ use of bear spray and thrown projectiles spurred police to also deploy pepper spray at times. Police said one bat was confiscated at Lownsdale Square, as weapons are banned in that park.

“Demonstration events are very fluid in nature and the management of these events is complex,” Assistant Chief Chris Davis said in a news release.

He continued: “There are hundreds of peaceful free speech events in the City in a given year that do not result in violence. Unfortunately, today some community members and officers were injured. We are actively investigating these incidents to hold those responsible accountable.”

Medics with Portland Fire & Rescue said three of the injured people were police and three were taken to nearby hospitals for treatment. Police said two officers were pepper sprayed, an officer was punched in the arm and another sustained a non-life-threatening head injury after being struck by a projectile.

The most high-profile injured person was undoubtedly Andy Ngo, a famous live-streamer whose opinion pieces have been published in the Wall Street Journal and the New York Post.

On Sunday Texas Senator Ted Cruz is called for a federal investigation and possible legal action against the Mayor of Portland:

“To federal law enforcement: investigate & bring legal action against a Mayor who has, for political reasons, ordered his police officers to let citizens be attacked by domestic terrorists,” Cruz tweeted on Sunday.

To federal law enforcement: investigate & bring legal action against a Mayor who has, for political reasons, ordered his police officers to let citizens be attacked by domestic terrorists. https://t.co/5xyCDARICl https://t.co/c0Tf3SsKEf

The Terrorist Group Antifa seems to have free reign in Portland.

Ten months ago Paul Welch came to the downtown Portland, Oregon on to protest against a march by the right-wing group Patriot Prayer, which also attracts white supremacists. Being an American, albeit a liberal one, Welch showed up holding his American Flag with pride.

As he made his way through the left wing side of the protest a bunch of Antifa protesters wearing best protest black, with their cowardly faces covered, ordered Paul Welch to get rid of the flag saying it was a fascist symbol. They tried to pull the flag away from Welch, and he refused, he wasn’t going to willingly allow anyone to desecrate the American Flag. They had a tug-of-war over the flag until one of the cowards with the covered face hit Paul Welch with a club to the back of the head. Leaving the patriot lying in the middle of the street with a concussion and bleeding profusely from his head.

Man down. He’s dripping blood from his head. This is serious. He got in a struggle with some black clad dudes over a flag and one of them clubbed him. Video coming. #DefendPDX #Alloutpdx pic.twitter.com/2rWnAkAC2J

Antifa’s reign of terror is nationwide their goal has been to violently silence dissenting opinions, they’ve rioted at conservative speaker events, trashed four different Republican headquarters, and worked to intimidate legal protests, and politicians dining at restaurants with their families.  Antifa terrorists are not anti-fascists. They are cowards who cover their faces. They are haters of this great country who attack people even if they are on their side, just because they show love for America. Antifa members are domestic terrorists and should be treated as thus.

Parts of this post was first seen at DC Dirty Laundry