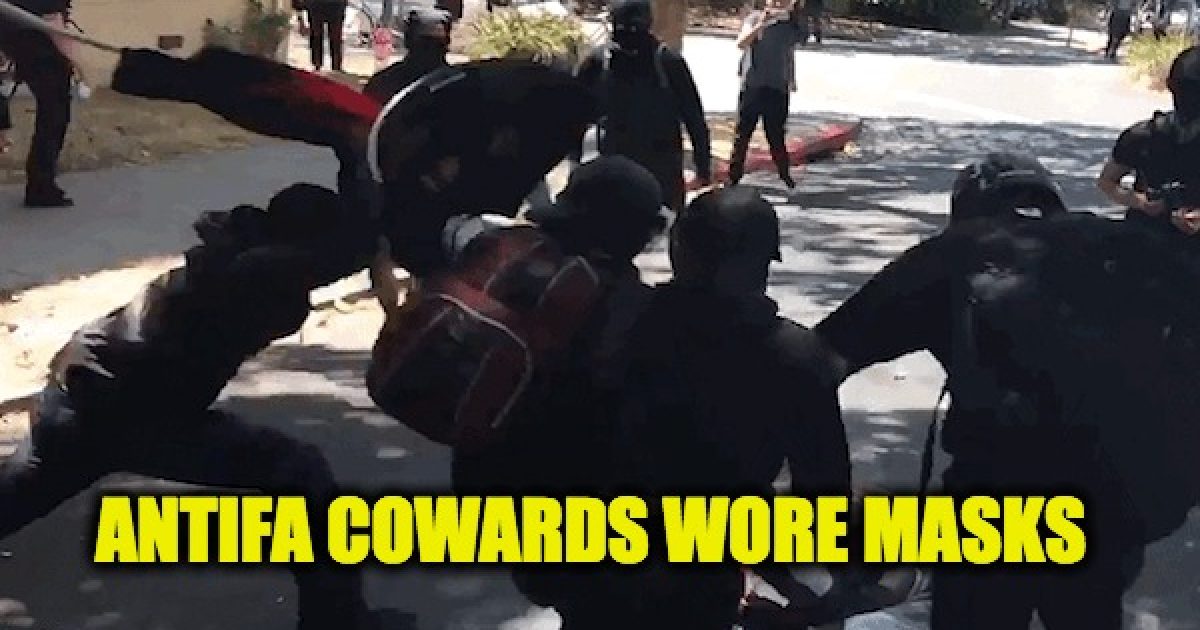 Remember how the MSM and the liberals (I guess that’s redundant), anyway remember how they flipped when the President said there was bad on both sides? Antifa was one of the groups he was referring to as bad on the left side. On Sunday, Antifa responsible for more violence.

A group of “anti-Marxists” gathered in Berkeley to demonstrate against the radical leftism that’s been on display in recent months and they were, of course, met by the same radical leftists they were protesting against.

A much larger group of what the mainstream media calls “counter-protesters” arrived to harass the anti-Marxists and for a while, things remained calm.

Sadly, at some point in the gathering over 100 masked leftists simply pushed past the police, avoiding a checkpoint designed to remove weapons from the protesters, and swarmed the anti-Marxist group.

The police force’s refusal to stop the leftist thugs led to several of the defenseless anti-Marxist demonstrators being severely beaten.

From the Fresno Bee:

Black-clad anarchists on Sunday stormed into what had been a largely peaceful Berkeley protest against hate and attacked at least five people, including the leader of a politically conservative group who canceled an event a day earlier in San Francisco amid fears of violence.

The group of more than 100 hooded protesters, with shields emblazoned with the words “no hate” and waving a flag identifying themselves as anarchists, busted through police lines, avoiding security checks by officers to take away possible weapons…

Berkeley police chief Andrew Greenwood defended how police handled the protest, saying they made a strategic decision to let the anarchists enter to avoid more violence.

Greenwood said “the potential use of force became very problematic” given the thousands of peaceful protesters in the park. Once anarchists arrived, it was clear there would not be dueling protests between left and right so he ordered his officers out of the park and allowed the anarchists to march in.

There was “no need for a confrontation over a grass patch,” Greenwood said

While the police may have seen “no need” to confront the leftist thugs, their victims who were hurt in the ensuing violence may beg to differ.

The organizers of the conservative demonstration canceled the event after local authorities refused to give them a permit to gather, but about 400 conservatives showed up individually to show solidarity with the President against left-wing hate.

In fact, the groups meeting in Berkeley over the weekend have denounced racism, denounced hatred, and begged for peace and unity. However, Antifa and the left wing hate machine doesn’t care about that…

After the anarchists spotted [Patriot Prayer leader Joey] Gibson at the Berkeley park, they pepper-sprayed him and chased him out as he backed away with his hands held in the air. Gibson rushed behind a line of police wearing riot gear, who set off a smoke bomb to drive away the anarchists.

Separately, groups of hooded, black-clad protesters attacked at least four other men in or near the park, kicking and punching them until the assaults were stopped by police. The assaults were witnessed by an Associated Press reporter…

Police pulled one supporter of President Donald Trump out of the park over a wall by his shirt as a crowd of about two dozen counter-demonstrators surrounded him and chanted “Nazi go home” and pushed him toward the edge of the park. At least two people were detained by officers for wearing bandannas covering their faces.

Again, these are groups who have disavowed racism and who are marching to defend freedom of speech and peace… yet Antifa uses Orwellian chants like the one above to condemn them. It’s sheer madness. Making it even worse is that many consider Berkeley the home of free speech because it was the place of birth for the 1960’s protests.

By the end of the event, 14 leftist thugs had been arrested by local police, most of them for choosing to bring weapons to the event.

The classy left-wing agitators weren’t just there to harass peaceful conservatives either – they were also there to verbally and physically confront the local police.

A reporter on the ground, Shane Bauer of Mother Jones said this alt-left protester was arrested for having a dog at the rally. She screamed, “I need my service animal!” and “f*ck you pigs!” as police walked her to the police cruiser. (language warning)

Cops arrest anti-racist counter-protester for having a dog. pic.twitter.com/xHRnTic9fP

Thanks to the miracle of modern technology we also have hours and hours of video footage proving where the violence comes from. The leftist fascists are constantly instigating violence and then using the ensuing chaos to act out their evil fantasies of harassing and beating innocent people

Watch this clip as the only thing that stops a beating is a black journalist who willingly puts himself at risk.

What was that Gary Cohn said about #Antifa again? Something about “standing up for equality & freedom”… ya O-TAY!????pic.twitter.com/kf9354mP0Y

Thank God for brave men like that willing to get between evil, violent thugs and the innocent.

There were even moments where the leftists had to fight among themselves just to stop the fighting!

Antifa rush the barrier as riot police evacuate the park. They spill through — “Whose streets?” “Our streets!” — as they hold flares high. pic.twitter.com/ze91vldtiB

Sadly, not everyone had the same kind of luck as the conservative who was rescued above.

Clip is from live chopper feed by @kcranews in #Berkeley. No cops seen, this is #Antifa. https://t.co/vQHUculNTX pic.twitter.com/AJvowKzbev

Just being a journalist didn’t mean you’d be spared from Antifa’s violence either.

“Take his camera, take his phone,” they are shouting at a journalist. #berkeley pic.twitter.com/hvsQ5eXalE

A woman attacked my photographer and I. #BerkeleyProtest #berkeley .@KTVU pic.twitter.com/LlzG9dBN4n

While one evil, violent racist nutjob in Charlottesville changed the narrative of the last few months, the simple truth is that the vast majority of the violence we’ve seen since last fall has been conducted at the hands of the left.

Yes, random left-wing protesters end up getting punched when they crash a Donald Trump speech every now and then… but at EVERY conservative gathering to show support for the President there is sure to be left-wing protesters ready, willing, and able to attack those innocent demonstrators.  Videos like the ones above are readily available on YouTube and Twitter and all over the web.

If the Democrats, the media, and local authorities don’t start getting these violent leftists under control, scenes like the one at Charlottesville will become more common… and our nation will continue its descent into chaos.