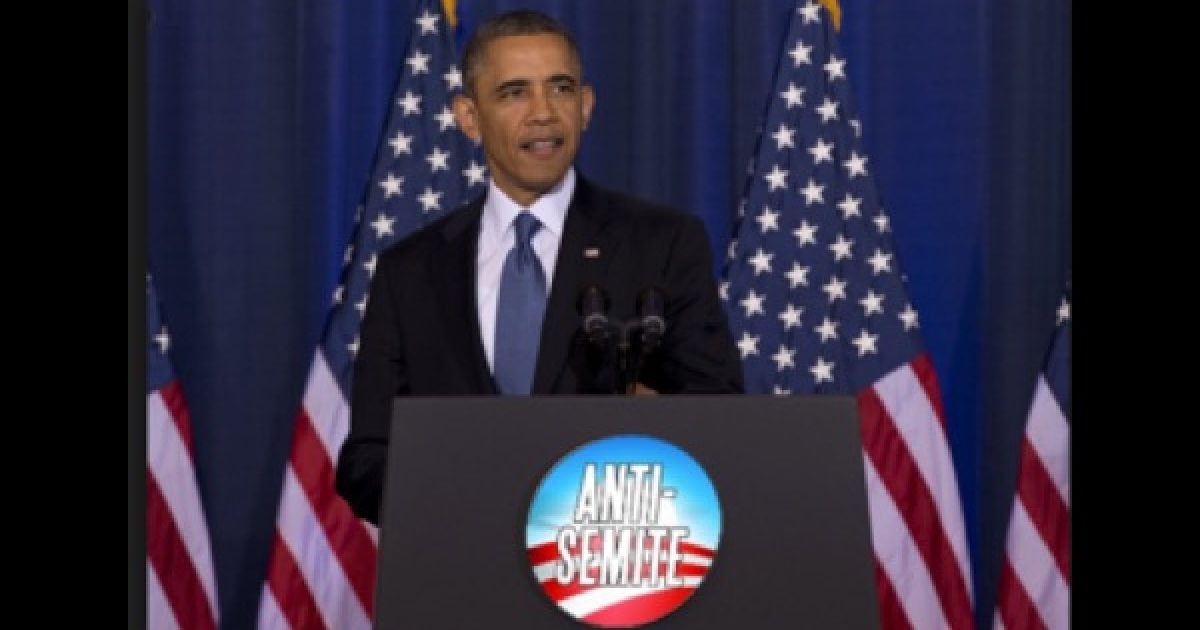 During his eight years in office, Barack Obama had a level of Antisemitism never before seen in the White House with the possible exceptions of FDR and Woodrow Wilson. But that doesn’t stop Obama from unabashedly using the term Nazi whenever he his criticizing President Trump.

Even though your generation is the most diverse in history with a greater acceptance and celebration of our differences than ever before, those are the kinds of conditions that are ripe for exploitation by politicians who have no compunction and no shame about tapping into America’s dark history of racial and ethnic and religious division. Appealing to tribe, appealing to fear, pitting one group against another, telling people that order and security will be restored if it weren’t for those who don’t look like us or don’t sound like us or don’t pray like we do, that’s an old playbook.

Hypocritical words for a man who during his eight years in office, Barack Obama had a level of Antisemitism never before seen in the White House.

Beginning with his first campaign for president, Obama surrounded himself with anti-Semites like General Merrel McPeak.  McPeak was the 2008 Obama for President Co-Chair who had an impressive resume of blaming our foreign policy on the “Jewish Lobby,”  Perhaps the best example of McPeak’s Antisemitism was when he was asked during an interview why there isn’t peace in the Middle East, and he said, “New York City. Miami. We have a large vote — vote, here in favor of Israel. And no politician wants to run against it.” (in other words, those pesky Jews, who control America’s policy on the Middle East).

Obama denied Jewish ties to the Land of Israel in his 2009 Cairo speech, saying Israel was created only because people felt guilty about the Holocaust.

Obama’s first Presidential Medal of Freedom honorees was Bishop Desmond Tutu and Mary Robinson. The friendliest thing Bishop Desmond Tutu ever said about Jews was “People are scared in this country [the US], to say wrong is wrong because the Jewish lobby is powerful.” He also once said, that “the Jews thought they had a monopoly on God.”

In the 20-minute phone call Obama said over, and over opponents of the Iran deal come from the same “array of forces that got us into the Iraq war,” he said a “bunch of billionaires who happily finance super PACs” are “putting the squeeze on members of Congress.”

The message was clear to the Jewish participants, William Daroff Senior Vice President for Public Policy and Director of the Washington office of The Jewish Federations of North America tweeted during the meeting “Jews are leading effort to kill #Irandeal. ‘Same people opposing the deal led us into Iraq war,’” and followed with “Canard: Jews got us into Iraq War.”

During the call, Lee Rosenberg of AIPAC questioned the President’s statement comparing people who object to the Iran deal with those who supported the invasion of Iraq. He pointed out that many anti-Semites falsely claim the Jews pushed Bush into invading Iraq. Obama explained that Netanyahu supported the Iraq invasion, which was true but Bibi wasn’t the premier at the time — he was a private citizen. The prime minister, Ariel Sharon, strongly urged Bush #43 not to invade Iraq, arguing correctly that if Saddam were removed, “Iran, a far more dangerous player, will be rid of its principal enemy and free to pursue its ambitions of regional hegemony.”

Of course, that didn’t matter to President Obama, he needed to find a Jewish scapegoat, so he used private-citizen Netanyahu who was firmly for the war. Also for the war was his V.P., the SCHMOTUS Joe Biden, both of his secretaries of state Kerry and Clinton, and his biggest ally in the Senate, Minority Leader Harry Reid, voted to support the invasion of Iraq in Congress.

During an August 2015 speech at American University, Obama again tried to scapegoat the Jews, saying:

Yes, Israel opposed the deal, but so did Saudi Arabia, Pakistan, UAE, Bangladesh and most of the other Sunni Muslim states vehemently opposed the deal because of their fears that Shia Iran would use nukes to attack them. But Obama wanted to scapegoat the Jews, and the media was quiet.

During his last year as president, Obama’s State Department condemned Israel for allowing people to build houses on land on the western side of the Jordan River. The property was legally purchased in 2009 by Dr. Irving and Cherna Moskowitz from a US Presbyterian Church. There were no complaints when the  Presbyterian Church owned it. Team Obama wasn’t objecting to the fact that houses were being built on that land back then. If the homes were intended for Christian or Muslim families, there would have been no issue. As it is was with so many other cases during the Obama administration, the objection was based on the fact that Jews were going to live in those buildings.

It is hypocritical for an anti-Semite like Obama to censure President Trump for creating religious division and lazy of the press to ignore it.