After Monsey, Anti-Semite Al Sharpton Says: Can’t Remain Silent About Antisemitism, But What About HIS Jew-Hatred? 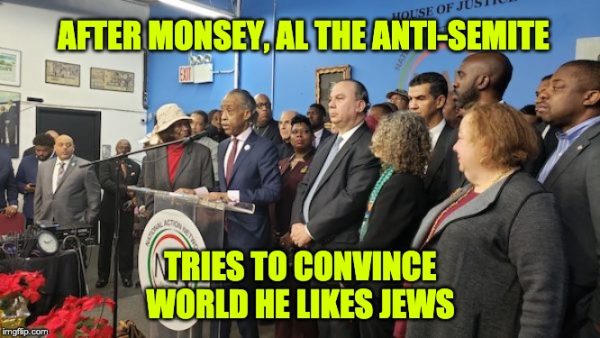 If there is a Nobel Prize for mendacity or an Oscar for hypocrisy, this statement by Al Sharpton will get the award.  This lying creep who calls himself a Reverend and a Human Rights leader has spent a lifetime spreading Antisemitism but never acknowledged or apologized. Still, the next-to-last day of the year, anti-Semite Al Sharpton spoke about the Monsey attack and claimed he wanted to fight Antisemitism.  He even said we can’t remain silent about Antisemitism.  But what about his Antisemitism??? He has been silent about it for years.

Even crazier is the fact the mainstream media covered it and they believed him. As Judge Judy would describe it, he peed on the media’s legs and told them it was raining.

Rev. Al Sharpton on Hanukkah attack in Monsey, NY: "We cannot remain silent as we see a consistent pattern of attacks against people based on their faith."

Do they know who was talking?

Just the fact that he spoke about Antisemitism makes me want to scrub myself with steel wool.

Allow me to pin on my yarmulke back and explain. Jew-Hater-Sharpton

Remember the Tawana Brawly Hoax? What most people don’t remember is that Al Sharpton  refused to meet Attorney General Abrams during the Tawana Brawley hoax because meeting the AG, who was Jewish, would be “like asking someone who watched someone killed in the gas chamber to sit down with Mr. Hitler.” Comparing a Jew to Hitler? Now there’s a friend of the Jews.

In the month before the Crown Heights Riot, when NYC Jews complained about the Antisemitism of Black College professor Leonard Jeffries.  Sharpton called them race-baiters, adding, “If the Jews want to get it on, tell them to pin their yarmulkes back and come over to my house.”

On the second day of the Crown Heights riot, according to the sworn testimony of Efraim Lipkind, a former resident of Crown Heights, Sharpton started agitating the crowd.

After days of anti-Jewish rioting in Crown Heights, at the funeral of Gavin Cato, the little boy whose accidental death started the riot. Gavin Cato who was riding his bike and was accidentally hit by a car in the Lubavitcher Rebbe’s precession,  Al Sharpton gave a powerful eulogy inspiring hatred and Antisemitism:

In August 2014, Politico.com published a feature story titled, “How Al Sharpton Became Obama’s Go-To Man on Race.”The piece stated that “Sharpton not only visits the White House frequently, he often texts or emails with senior Obama officials such as [Valerie] Jarrett and Attorney General Eric Holder. Really? If he cares so much about Antisemitism, why didn’t he chide Obama for his eight years of Jew-Hatred?

And if he really wants to fight Jew-hatred, why does he support Louis Farrakhan?

Lately, anti-Semite Al Sharpton has tried to make nice with the Jewish People,  but he’s never recognized his hatred or apologized for his long history of hating the Jews.

The truth is anti-Semite Al Sharpton is a fraud as well as a hater. The Democratic candidates who felt the need to get his blessing, the New Yorkers such as Gov. Cuomo and Chuck Schumer, who recently attended his birthday gala and the former conservatives who kiss up to him such as Joe Scarborough should all be ashamed of themselves. The media that covered his Monsey hypocrisy should be ashamed as well. But it is doubtful that any of those who kiss Sharpton’s ring has a conscience.