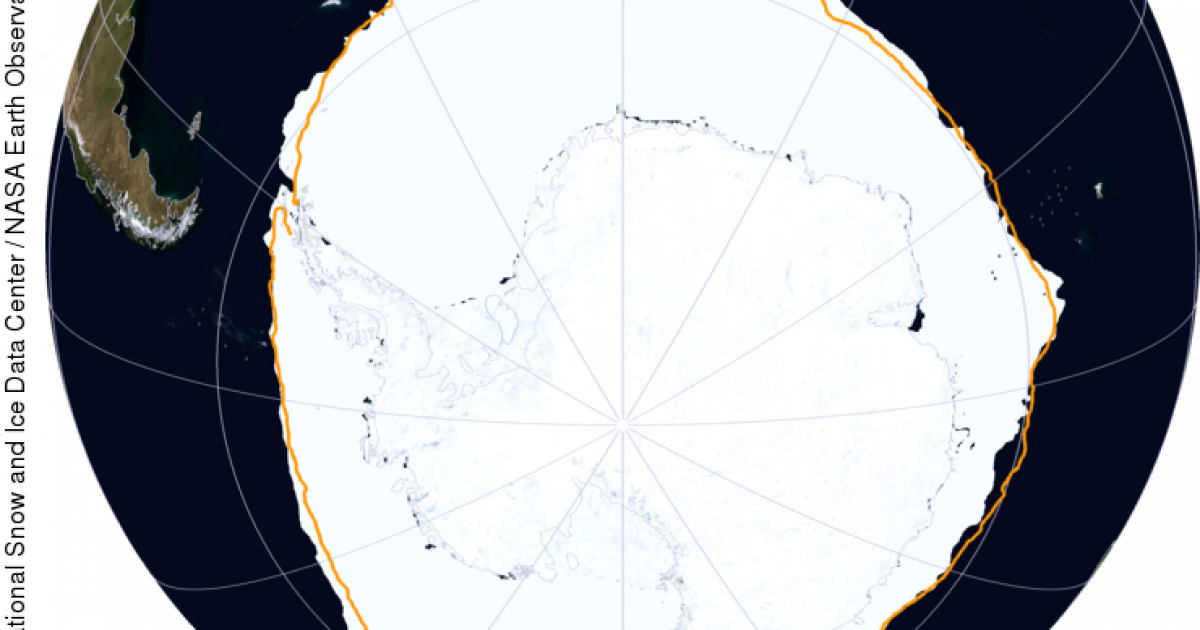 Now we know the real reason Bill Nye the Science Guy is on Dancing With the Stars. With each passing day there is more (and new) evidence that the global warming theory he so poorly advocates, is nothing but an elaborate hoax

The latest news comes to us from NASA care of the Washington Post (yes THAT Washington Post). According to the liberal paper the sea ice at the Earth’s southern pole has grown to a record large extent (the area of the ocean with at least 15% ice) for a second straight year, baffling the global warming hoaxers who predicted that by this time there would be new waterfront property through out the world due to ice melt/rising sea levels. According to the  scientists the ice is expanding even though the water underneath the is warming (I would hate to be the guy they send to “check out” the water under the ice).

“The polar vortex that swirls around the South Pole is not just stronger than it was when satellite records began in the 1970s, it has more convergence, meaning it shoves the sea ice together to cause ridging,” the study’s press release explains. “Stronger winds also drive ice faster, which leads to still more deformation and ridging. This creates thicker, longer-lasting ice, while exposing surrounding water and thin ice to the blistering cold winds that cause more ice growth.”

But no one seems to have a conclusive answer as to why winds are behaving this way.
Here’s a fun explanation:

If the increase in ice is due to natural variability, Zhang says, warming from manmade greenhouse gases should eventually overcome it and cause the ice to begin retreating.

“If the warming continues, at some point the trend will reverse,” Zhang said.

Sorry to break it to you Dr. Zhang but since just before the start of the 21st century, the Earth’s average global surface temperature has failed to rise despite soaring levels of heat-trapping greenhouse gases. Perhaps it’s time to re-think your explanation

Another study say the recovery of the stratospheric ozone layer – now underway – may slow/delay Antarctic warming and ice melt.

Actually there is a Scientist in Canada who says the entire global warming trend was due to the hole in the Ozone. A peer-reviewed study published in the spring of 2013 by Professor Qing-Bin Lu of the University of Waterloo, proves carbon dioxide (what comes out of our lungs every time we exhale) was not the cause of the global warming trend (which he says ended 11 years ago).

“the observed data show that CFCs conspiring with cosmic rays most likely caused both the Antarctic ozone hole and global warming. These findings are totally unexpected and striking, as I was focused on studying the mechanism for the formation of the ozone hole, rather than global warming.”

According to the good doctor it was chlorofluorocarbons (a gas made composed of carbon, fluorine, and chlorine) not CO2 which raised world-wide temperatures between 1950 and 2002.  CFCs were already known to deplete ozone (remember when we had to stop using certain aerosol cans because they were putting a hole in the ozone layer?).  Lu’s  analysis suggests that CFCs were also and the holes in the ozone layer were the key driver in global climate change, rather than carbon dioxide (CO2) emissions.

The total amount of CFC’s ozone-depleting molecules decreased around 2000. Which is also when that hole in the Ozone layer started closing. Correspondingly, the global surface temperature have also dropped. On the other hand,  the CO2 level has kept rising since 1850 and now is at its largest growth rate (which means some of you never held your breath-SHAME!)

The real reason the global warming hoaxers are baffled is that they have run out of ways to explain the fact their theory is falling apart. Sorry Mr. Science Guy, but at least you have your dance career.