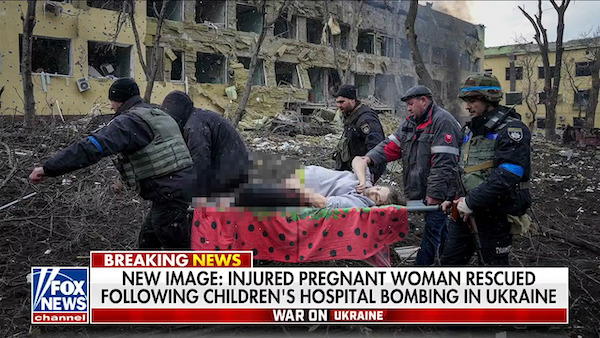 War is hell.  Always has been.  Always will be. The Russian invasion of Ukraine is being reported in real-time and on video, so it seems more hellish than others .another war crime.

And, when you’re as vindictive as Vladimir Putin, and things aren’t going your way, war can be particularly atrocious for those on the other side of Moscow’s might.

Such is the case in Ukraine this week, where the long list of Russia’s war crimes just got longer and in an absolutely horrific way. The latest atrocity was bombing a maternity ward of a children’s hospital.

Ukrainian officials said on Wednesday that a children’s hospital and maternity ward in the city of Mariupol have been destroyed by Russian airstrikes.

“The Russian occupying forces have dropped several bombs on the children’s hospital,” the Mariupol City Council said in a statement. “The destruction is colossal.”

“The destruction is colossal.”

According to the Associated Press, at least 17 people were injured.

The attack came despite Russia agreeing to a 12-hour pause in hostilities to allow refugees to evacuate a number of towns and cities. But the Russians have made similar promises in the past week, and none of them held.

This hospital bombing led to desperate pleas for help from the Ukrainian government.

Mariupol. Direct strike of Russian troops at the maternity hospital. People, children are under the wreckage. Atrocity! How much longer will the world be an accomplice ignoring terror? Close the sky right now! Stop the killings! You have power but you seem to be losing humanity. pic.twitter.com/FoaNdbKH5k

Ukrainian President Volodymyr Zelensky tweeted a video that he said showed the hospital in the aftermath of a “direct strike” by Russian troops.

“People, children are under the wreckage,” he wrote. “Atrocity! How much longer will the world be an accomplice ignoring terror?”

Zelensky again called on NATO to create a no-fly zone over Ukraine — something the United States and its European allies said they would not do.

“Close the sky right now! Stop the killings!” Zelensky tweeted. “You have power but you seem to be losing humanity.”

The world will not soon forget these horrors committed in the name of Vlad Putin.

Most of this post was first seen at Flag and Cross.