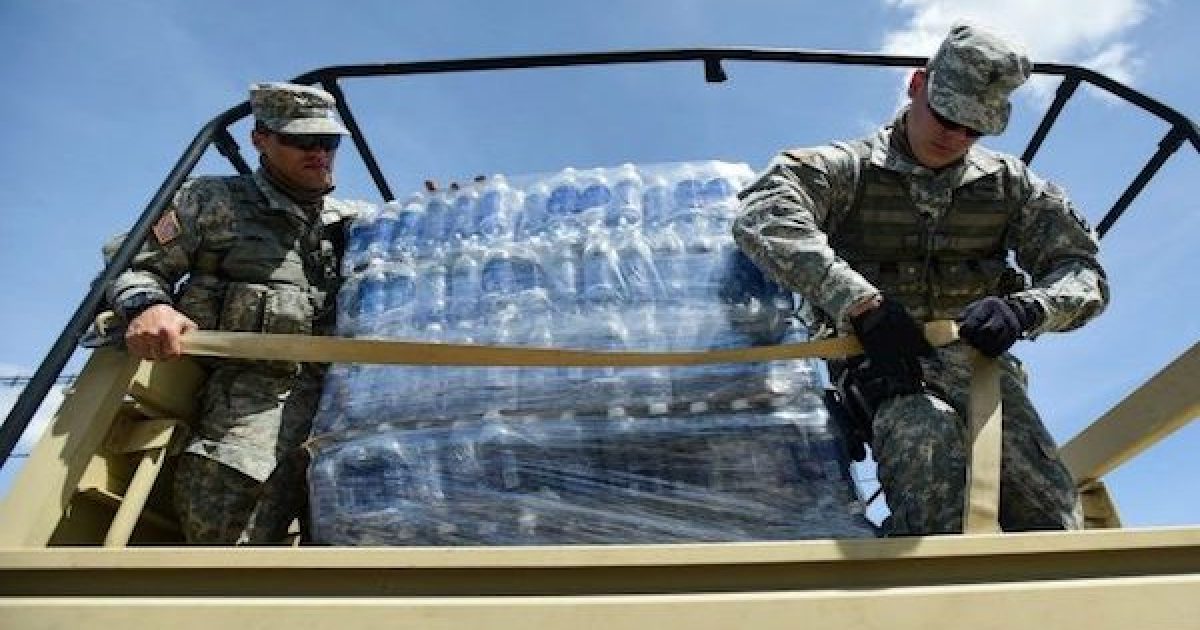 We can start by saying that DHS’ acting Secretary Elaine Duke could probably have chosen her words better in a statement on Thursday.

Speaking outside the White House, Duke said that what has been accomplished so far in the challenge of getting aid to the people of Puerto Rico is “really a good news story.”

Compared to how bad it could be, that may be true.  But it would surely ring hollow in the ears of people with no shelter scrabbling for food and water on an island where all electrical power has been lost, and most home structures have been devastated.  There was probably a better way to say this.

But the challenges of trying to deliver aid, which first requires restoring some basic infrastructure, are now being widely reported.  (The MSM widely ignored them at first.)  Puerto Rico’s Governor Ricardo Rosselló praised the Trump administration – again – on Friday morning for its robust response to the Hurricane Maria disaster in light of those challenges,

“The president and the administration, every time we’ve asked them to execute, they’ve executed quickly,” Rosselló told Fox Business host Maria Bartiromo in an interview on Friday morning.

Rosselló and San Juan Mayor Carmen Yulín Cruz have been largely complimentary about the disaster response so far. After Ms. Duke’s comments on Thursday, however, Yulín Cruz burst out with an angry denunciation, duly transcribed at Politico.

“Well, maybe from where she’s standing, it’s a good-news story. When you’re drinking from a creek, it’s not a good-news story. When you don’t have food for a baby, it’s not a good-news story,” Cruz told CNN’s “New Day,” referring to the plight of Puerto Ricans, many of whom have received little or no aid thus far. “When you have to pull people down from their buildings — I’m sorry, but that really upsets me and frustrates me. You know, I would ask her to come down here and visit the towns, and then make a statement like that, which frankly, it is an irresponsible statement.

“Damn it, this is not a good-news story. This is a people-are-dying story. This is a life-or-death story. This is a ‘there’s-a-truck-load-of-stuff-that-cannot-be-taken-to-people story.’ This is a story of a devastation that continues to worsen because people are not getting food and water,” she continued. “It is not a good-news story when people are dying, when they don’t have dialysis, when their generators aren’t working and their oxygen isn’t providing for them. Where is there good news here? … I’m really sorry, but you know when you have people out there dying, literally, scraping for food, where is the good news?”

The mayor’s frustration is understandable, although she too could probably have chosen her words better.

For one thing, it’s premature to talk in recriminatory terms about people dying, when we simply don’t know yet how many people may have died in addition to the 16 whose deaths were accounted for immediately after the hurricane swept through.

Geraldo Rivera, on the ground in Puerto Rico and no Trump fan, tweeted this in response to Cruz’s “people are dying” claim:

#SanJuanMayor says residents are “dying,” & somehow @realDonaldTrump is to blame. I’m here. Who is dying? Why? Where? Let me help save them.

But we could let all that pass.  We could, that is, if the media weren’t dedicated to making it look – falsely – as if the Trump administration is whiffing on its response to the devastation of Puerto Rico.

Here’s a sample on Saturday from the aggregator, Memorandum: 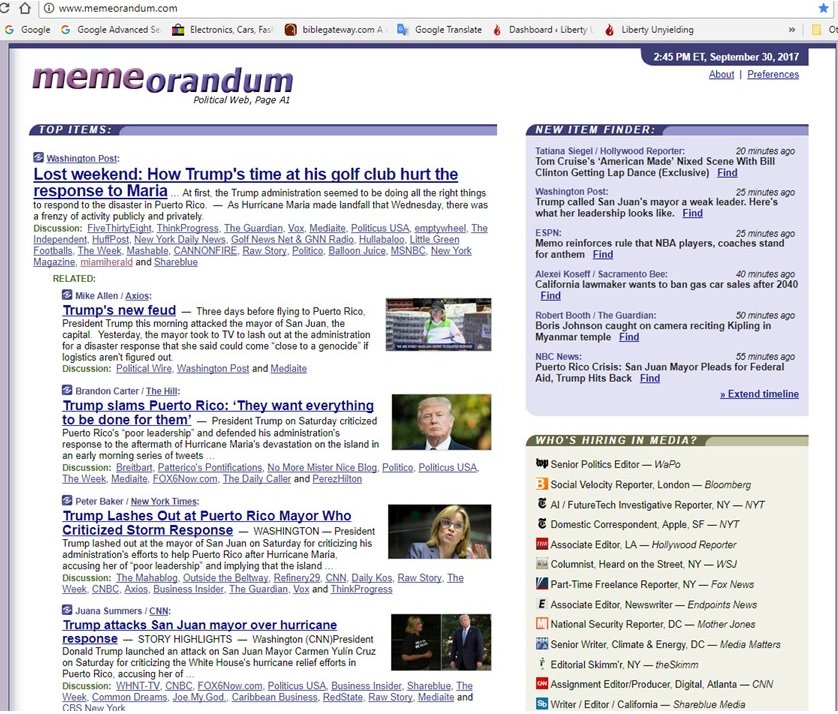 Yet the military, which has been stationed offshore for response since before Maria came through, has been providing aid 24/7 in the days since, is deploying thousands of troops with heavy equipment and supplies to Puerto Rico, and has more Navy and Coast Guard ships deployed off the island, and heading to it, then there are in the Persian Gulf and Mediterranean combined.

(The demand of House Democrats that Trump sends an aircraft carrier from Norfolk is politicized nonsense, not sound thinking.  With two amphibious “big decks” off Puerto Rico – the ships that carry and operate aircraft for amphibious operations – a carrier would be superfluous.  The “LHAs,” as the amphibious ships are designated, are much better suited to supporting Puerto Rico than a carrier is.  Helicopters from all services can stage from them to deliver aid to otherwise unreachable parts of the island, and in fact, have been doing so for days.  The one potentially available carrier, meanwhile, USS Abraham Lincoln(CVN-72), just came out of a lengthy reactor replacement in May, and needs every day of work-ups she has to be ready for her next operational deployment.)

The federal response across all agencies was reported by DHS over a week ago, with most of the items on the list accomplished by now, including the launch of the all-important restoration of power to the island.  As Bloomberg’s reporting acknowledged (link in the last paragraph), the administration has not, in fact, botched its response in Puerto Rico.

So it’s necessary to keep that in mind when assessing Trump’s undoubtedly combative reaction to the outburst from the San Juan mayor.  It probably wasn’t necessary for Trump, either, to criticize the mayor’s leadership on a personal basis. 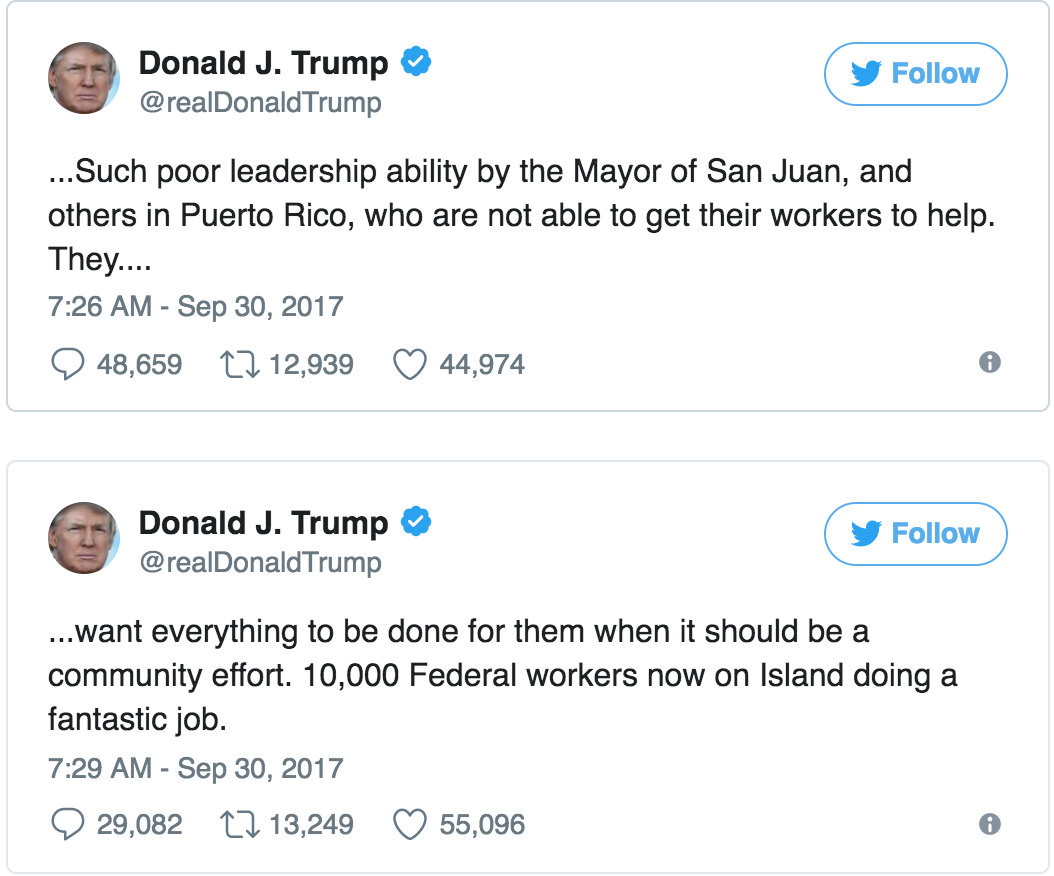 But Trump isn’t just trying to shape perceptions of how he’s handling things.  The third tweet makes clear that he’s doing the leader’s job of praising his people and keeping their spirits up – in spite of the media attacks on him.

The media war to make Trump’s performance look bad ends up reflecting on the thousands of federal workers, military and civilian, who are already doing everything they can to bring Puerto Rico back and ease the suffering there.  It doesn’t help Puerto Rico at all, and it’s a morale blow to the disaster-response workers, to have their performance so badly misrepresented.

What, incidentally, did Trump mean in the first tweet, in which he said this?

The Mayor of San Juan, who was very complimentary only a few days ago, has now been told by the Democrats that you must be nasty to Trump.

If you don’t care what he meant, I salute you – as long as you are equally dismissive of the media’s effort to smear the Trump administration’s response in Puerto Rico.

The media are trying to sell a lie.  Trump is neither better nor worse in alluding gratuitously to the politics of Mayor Cruz, a far-left activist who lobbied intensively for the release of FALN terrorist and murderer Oscar Lopez-Rivera prior to Obama’s last-minute commutation of his sentence in January; who testified to the UN in 2016 that Puerto Rico is basically suffering as an occupied colony; and who endorsed Hillary Clinton in 2015, but then withdrew her endorsement because Clinton wasn’t far enough left in her policies.

It is as unattractive as Trump’s own trenchant tweets, to be sanctimonious about how he “should” be communicating in the face of the relentless media assault on the truth about his presidency.

There is no option for Trump of taking the high road and keeping the public conversation elevated.  We know that from the long-running campaign to distort and defame George W. Bush’s response to Hurricane Katrina, about which many Americans still to this day believe decidedly un-elevated media falsehoods.

By tweeting in his signature way, Trump draws fire to himself and reminds his audience of the tough job the federal response force is, in fact, doing in Puerto Rico.  It’s a kind of combat tactic, rather than conventional political discourse – but America is in combat with the mainstream media, and has been for some time.  The mainstream, anti-Trump media want to win a war against America and to deconstruct and denature the very essence of what America is.  Everything they support and everything they hate — which is now what their reporting is mostly about; their agenda — make that clear.

Meanwhile, the job in Puerto Rico is getting done, which is what matters right now.  There is no doubt things that could be done better; there always are.  But I wouldn’t trust the anti-Trump media reports seen in Memorandum to tell me what those things are.