Writer Tweets Video Of Police Brutality Implies It’s From America, But It Was From Serbia 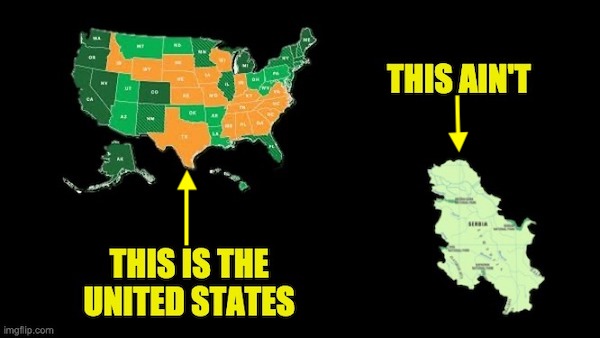 Andy Ostroy is a filmmaker/producer and writer for Medium and a crazy leftist. On Tuesday, Ostroy posted a video showing horrific police brutality with the caption, “Anyone who can’t understand how Hitler got his citizens to commit atrocities…and think it can’t happen here…just watch. This is some seriously terrifying police brutality that 6 months form[sic] now could be a whole lot worse…”   His word’s “and think it can’t happen here”  gave the impression that it did happen here.  But until he got questioned, he neglected to tell readers that the video showed police brutality in Serbia.

Anyone who can’t understand how Hitler got his citizens to commit atrocities…and think it can’t happen here…just watch. This is some seriously terrifying police brutality that 6 months form now could be a whole lot worse… pic.twitter.com/sB5XbHjEUm

That really is horrific. No one wants to see law enforcement behave that way. That was absolutely brutal.

What he didn’t tell people in the initial tweet is that this video was not taken in the United States in 2020, it’s from Serbia.

Isn’t it weird how Twitter hasn’t done a “fact check” on this media? Perhaps they didn’t fact check because the video fits Twitter’s liberal agenda.

What do you think Ostroy’s intention in posting this video was?

(a) make people believe that this was happening on American streets

(c) get those sweet, sweet likes and retweets

He made his intentions quite clear.

Ostroy was asked where and when this video is from, and the truth comes out…that Ostroy doesn’t appear to have even a passing acquaintanceship with journalistic integrity. 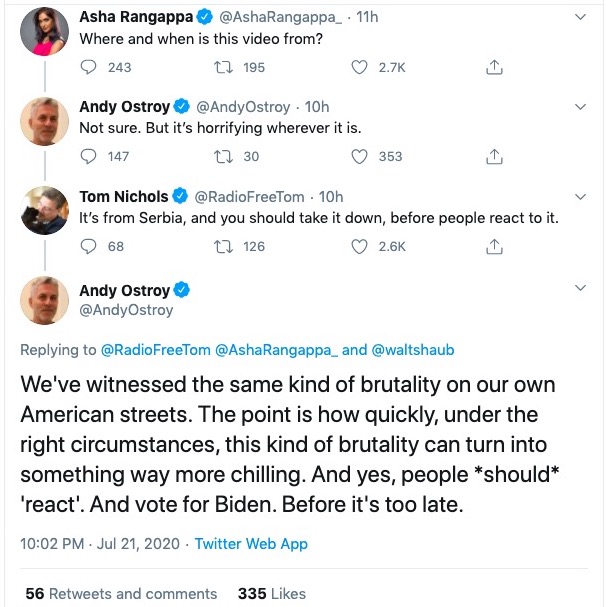 Oh! So he’s shilling for Biden! Now it all makes sense.

He’s been called out by many, many people for a clearly misleading tweet–but he’s defending it anyway.

He’s allowing it to stay up for the likes and retweets. In 10 hours, he’s had almost 25K likes and more than 16K retweets.

Why would he clarify? He’s getting a helluva lot of likes and retweets. 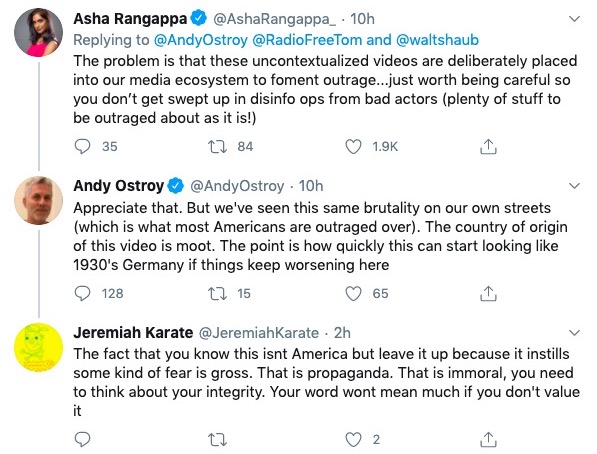 Ostroy defended himself frequently and said that the location of the video was “irrelevant.” 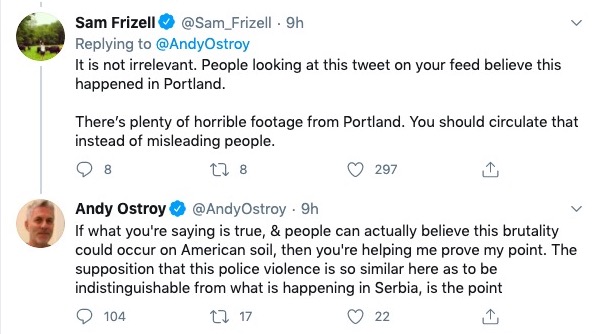 It was the back and forth between Ostroy and Matt Whitlock, a Senior Advisor for the National Republican Senatorial Committee that was just astounding.

Ostroy said that he was making a comparison because “we’re seeing the same brutality in our streets.” In that, Ostroy isn’t exactly wrong–but it’s not law enforcement exhibiting that sort of brutality in America, it’s the protesters. But that’s clearly not what Ostroy believes.

The question is if we see the same brutality in America and everyone and their dog has a cellphone and captures video of every interaction with police, why did he have to rely on a video from Serbia? Surely he could use an example from the streets of say…Portland to make his point, right?

Imagine thinking that a someone who is in the media and part of the Blue-Check Brigade on Twitter should be intellectually honest, right?

Whitlock calls him out on his dishonest tweet and hits the nail on the head. “Ah, so the point is to mislead,” wrote Whitlock. 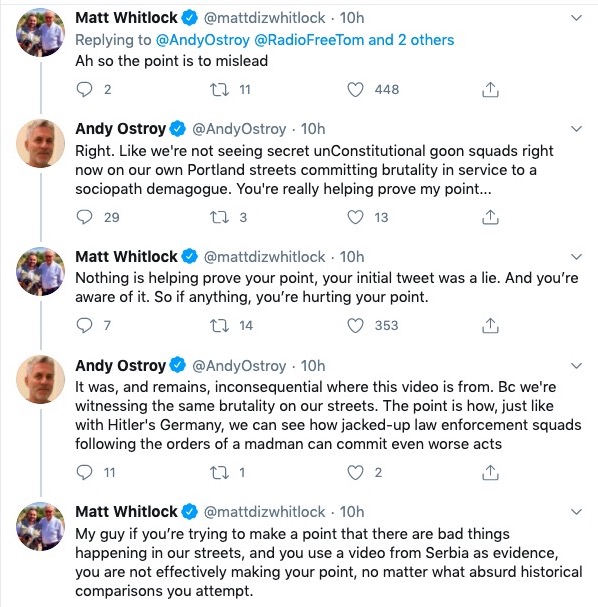 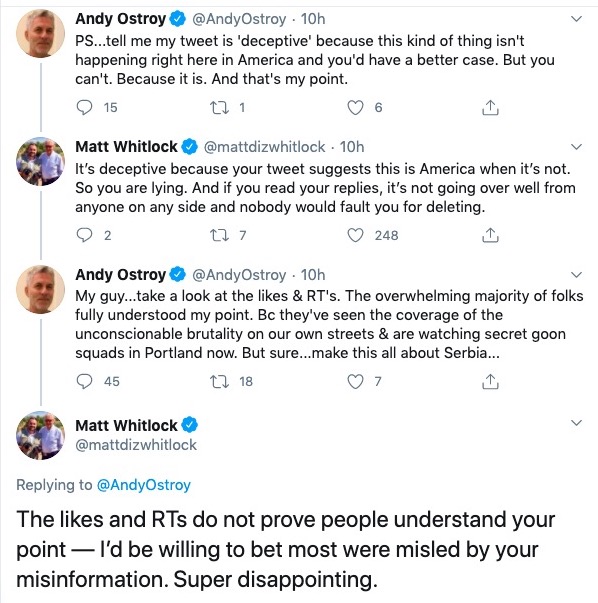 Do you think that Verified Twitter User™ Andy backed down after being called out for “fake news”? Heck no.

He quadrupled down. He retweeted the original saying that criticism of his tweet is proof that his point is correct. 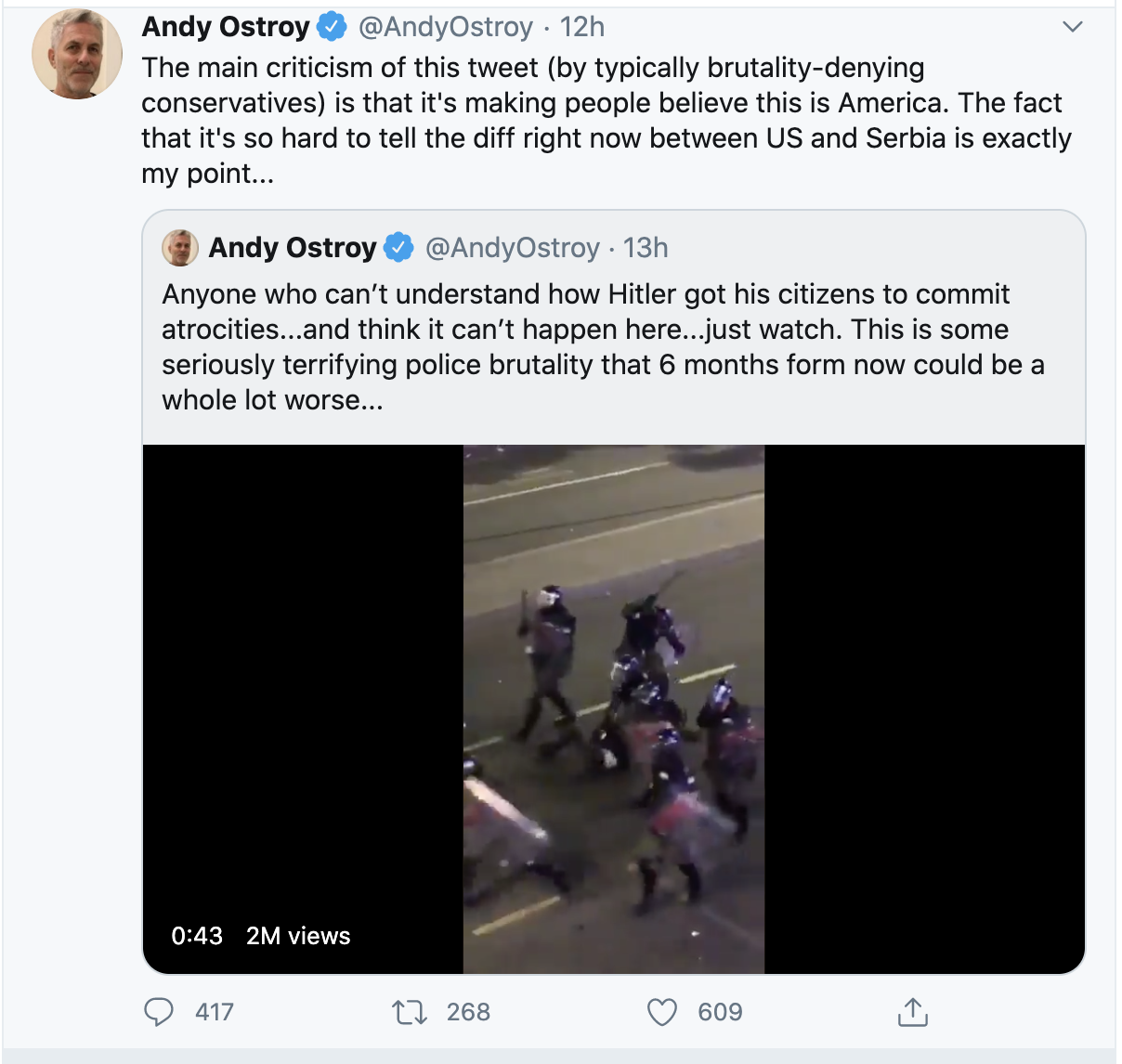 Gee, he must have read the novel 1984 many times because he’s really good at “newspeak.”

So, because he–as a Twitter-verified poster, it’s okay. Posting a video from Serbia and suggesting that this was taking place in the United States. And making his lefty anti-police followers who think that police brutality is literally everywhere believe it is happening in the United States, that means that he’s made his point.

The alluring siren song of having a tweet to go viral despite being completely disingenuous has lured many journos to their demise, and it’s not going to stop anytime soon. Just look at what has happened to our White House Press Corps in the past 3 1/2 years. Journalists don’t want to report the story anymore, they want to be the story.

And enjoy your new label as a purveyor of Fake News.