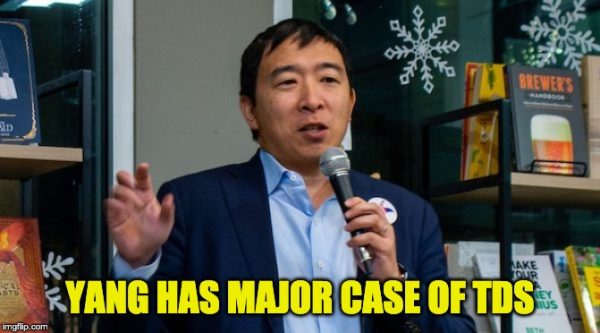 At around 5 pm Tuesday, America STARTED getting the results from the Iowa caucuses.  Supposedly the problem was a “coding issue” found in the app used to record and report votes. It correctly recorded votes but couldn’t report them accurately. One would typically blame the issue on the people who developed the app, but White House candidate Andrew Yang thinks he knows who the real culprit is — Donald Trump, of course. Andrew Yang Blames Trump

“It might be helpful to have a President and government that understand technology, so this sort of thing doesn’t happen,” he said on Twitter.

It might be helpful to have a President and government that understand technology so this sort of thing doesn’t happen.

This is almost like blaming Russia for Hillary losing in 2016.

Response to Yang’s fact-free conspiracy theory was pretty much what you’d expect:

Your own party developed the app, and then wouldn't even tell people who the developer was, bonehead.

Which is why the GOP caucus weren’t an unmitigated disaster as the Democrats was. And LOOK, the GOP’s results are already in as well. – https://t.co/SQ3pnSSKLh

You’re kidding me, right? I wouldn’t want a POTUS who got knee-deep into the weeds. I want one that can hire the right people to do the job. Something that the Democrats proved they can’t do. Thank God Trump is POTUS.

WTF does @POTUS @realDonaldTrump have to do with software created by a DEMOCRAT owned company?!?!? ?

That’s what we’d like to know. We’re not going to hold our breath waiting for an answer, however.

DNC controls all of this ya big dope.

Shadow, a Democrat-affiliated technology company, developed the app that officials had hoped would deliver swifter caucus results. The outfit is run by Gerard Niemira, who served as Director of Product for Hillary Clinton’s failed 2016 presidential campaign. Additionally, former Clinton campaign manager Robby Mook was part of the project Defending Digital Democracy (DDD) — an initiative aimed at protecting elections from cyberattack — that tested the app ahead of the botched caucus.

In its statement, the Iowa Democratic Party said last night’s results will be reported  “as soon as possible today” but would not give a firm deadline.

“Precinct level results are still being reported to the IDP.  While our plan is to release results as soon as possible today, our ultimate goal is to ensure that the integrity and accuracy of the process continues to be upheld,” said officials.

The reporting app was distributed to precinct chairs shortly before Monday’s caucuses.

Some Iowa precinct chairs noticed problems with the app during tests earlier Monday but assumed they were only sporadic issues, the Des Moines Register reported. However, the issue turned into a paralyzing malfunction after the caucuses concluded, and organizers found they were unable to log into the app.

I am not a big fan of Yang not only because he is very liberal, but also because he came out against circumcision. And by blaming Trump for the Iowa screw-up proves why he cannot be circumcised.  There is no end to that prick.