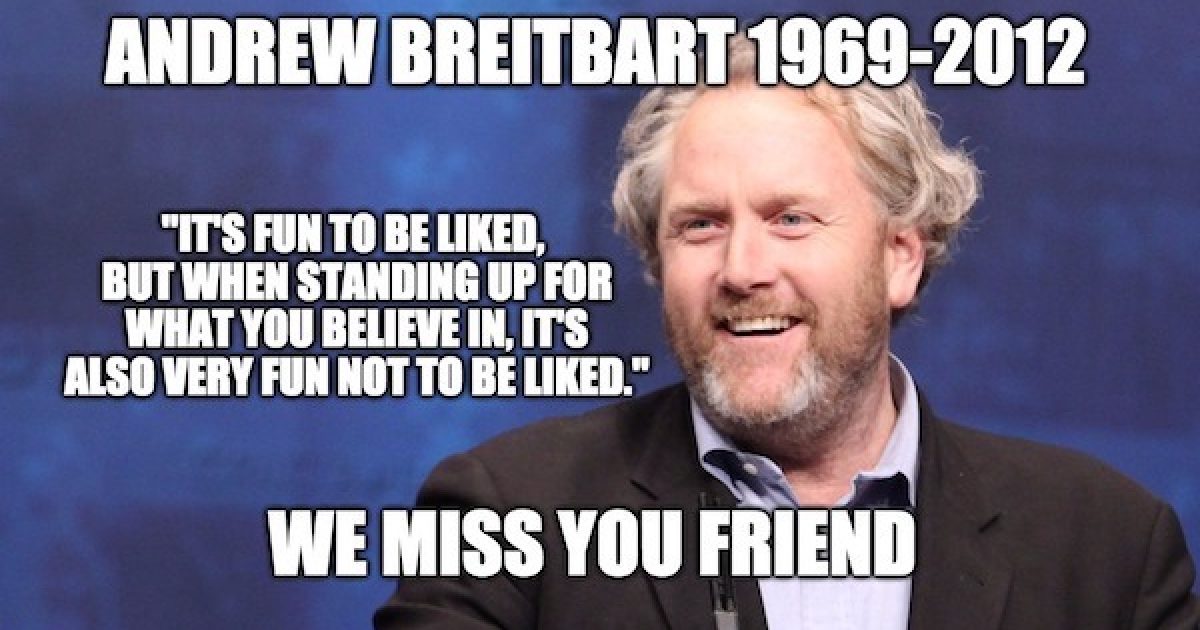 It’s hard to believe that Andrew Breitbart’s giant heart gave out seven years ago today, March 1, 2012. Despite the fact that it’s been seven years, his cell phone number is still on my iPhone, his name is still in my LinkedIn contacts, and most importantly, the spark of fire and passion he injected into everyone who ever had the pleasure of meeting and working with him is still burning in my heart.

I started writing for the “Big” sites because I developed a reputation for strong articles about Israel and the Middle East. Andrew Breitbart and his friend Larry Solov (a Jew who is now Breitbart CEO) conceived of the idea to found  Breitbart News Network, with “the aim of starting a site that would be unapologetically pro-freedom and pro-Israel.”

During the last year and a half of his life, I penned 2-3 articles a week for the Breitbart “big” sites Big Government, Big Peace, Big Journalism, and Big Hollywood. At first most of my posts were about Israel or other Jewish-related issues (one of the biggest of which was breaking the story about the anti-Semitic video that cost Helen Thomas her job).  But soon I expanded into politics, culture, media criticism, and international relations.

Though never part of Andrew’s inner circle of friends, and we may have spoken to each other only a total of maybe 30 times (either in person or on the phone) during his too-short life, I called Andrew Breitbart my friend (and still do). This was not some delusion of grandeur on my part, it was part of the magic of Breitbart. Andrew made everyone he met feel like they were the most important people in the world and a key component of his team.

For example, while on the publicity tour for his latest book, Andrew appeared on the Hugh Hewitt radio show. Hewitt jokingly told Breitbart he was disappointed that his name wasn’t in the acknowledgments. Never one to pass up piling on to a good joke, I tweeted Andrew to let him know that Hewitt had no right to be in the acknowledgments, but as one of his most prolific contributors, I should have been named and received some of his royalties on top of it. The very next day, I received a phone call apologizing for not including me. He said he knew it was a joke, but he wanted to make sure I wasn’t really upset. That was the Andrew Breitbart I knew; he always found time to make others feel important.

Andrew urged us to be unafraid as long as we had the truth on our side. He gave us the confidence to stand up to bullies no matter who they were and whether they were a “regular Joe” or the president of the United States. He also taught us to look beyond the public personas on the front lines. The more significant threats, he warned,  were the people behind the scenes who pulled strings  to gain personal power, money, and influence. For example, my first posts about George Soros was for Big Government.

And as is the practice of the very best leaders, when any bullies went after the folks on his team,  Andrew would step in front of us to take the bullet. One Saturday evening, after writing a Friday article about anti-Israel columnist M.J. Rosenberg, an on Big Journalism,  I turned on my computer and was surprised to find hundreds of Twitter mentions on my account.

Eric Boehlert, a senior person at the George Soros-funded Media Matters for America had decided to call me a Jew-Basher. Realizing that I would not be online during the Jewish Sabbath, Andrew and the entire team of Breitbart editors spent the day  “beating up”Boehlert, and the rest of the Media Matters people in my defense.

Andrew Breitbart was the guy you wanted in the “fox hole” with you.  And I was honored that he welcomed me into the ‘fox hole” with him.  The truth is— it wasn’t just me; everyone who was willing to get off their ass and fight for the truth was welcome into the foxhole with Andrew. But a warning If you were found yourself in a foxhole with Andrew, you would have to walk delicately around the massive pile of cell phones with him. The guy was always working it, texting, talking, etc. Once, while on the phone with him as he was driving on some California highway, I heard a noise followed by his statement that he had to go because his other phone was ringing.  HIS OTHER PHONE?!?!?  IN A CAR!?!?  Andrew balanced more cell phone conversations at the same time than any non-super human person who ever lived.

Andrew was a multitasker. Not the usual kind who can work, watch TV, and talk on the phone at the same time; that’s for amateurs. Andrew could discuss five different, incredibly diverse topics simultaneously to five entirely different people. He would not only be able to keep them straight, but he’d also come up with brilliant ideas about how to tackle each topic.

Andrew was a bit crazy—like a fox. Sometimes, he would intimidate progressive bullies simply because they wouldn’t know what he would do or say next. But like Shakespeare’s Hamlet, it was all just an act.

At CPAC Andrew would usually speak on Saturday mornings and it was a brilliant scheduling strategy because it didn’t matter how late attendees were up partying the night before, we would happily wake up early to attend his speeches. That’s because Andrew’s speeches were nothing short of incredible.  At some point during each appearance, it would seem that he was merely spewing some “stream of conciseness.” But, in the end, his speeches always made sense, proved some important point, rallied the “troops,” and usually was funny as all hell.

Arguably, One of Andrew ’s best public moment involved the first of the Anthony Weiner sexting scandals. In the spring of 2011, Weiner tweeted a link to photo of his erect penis concealed by boxer briefs to a 21-year-old female college student from Seattle, Washington, who had “conversed” with the congressman before via Twitter. Though Weiner quickly removed the link from his twitter feed, screenshots of Weiner’s original message and of the photo were captured by a Twitter user and sent to Andrew Breitbart who published them on Big Government the following day.

Because Andrew ‘s “Big” sites were such a threat, the media attacked Breitbart, accused him of faking the picture and/or hacking into Weiner’s Twitter account. Eventually, Weiner scheduled a press conference to admit his guilt. I planned on watching the TV coverage when the presser started. But before the press conference was to start, I received a tweet from a Breitbart colleague telling me to turn on the set immediately because Andrew had taken over the Weiner presser.

That was a bit of an exaggeration. Breitbart was in New York for a television appearance and, when he heard about the presser, he decided to walk over and watch it live from the back of the room. But, members of the press saw him enter, and soon all of the assembled media were aware of Andrew’s presence. Suddenly the TV cameras that were focused on the podium waiting for Weiner,  turned around to cover Andrew Breitbart. Marcia Kramer of the local CBS affiliate suggested that Andrew take the stage and answer questions. The video of that impromptu press conference is below.

Andrew saw himself as a protector of bloggers, tea partiers and all who were attacked by bullies from either side of the aisle. He was a “lead, follow or get out-of-the-way” type of person, most of us chose to follow because no other human being could stay ahead of his incredible energy.

The last time I saw Andrew was at the bar on the last day of CPAC 2012. Sarah Palin had just finished her keynote address, and the tired crew of bloggers was getting ready to go out to celebrate the three days of intense work just completed—well, all except for Breitbart.  Andrew was holding court in the lounge of the hotel bar, discussing the news of the day with a group of college students who had attended CPAC.  He was answering their questions and wasn’t going anywhere until each questioner was satisfied. Andrew wasn’t there because of some need to be adored by a big crowd, but because he really cared about the future of this country, wanted to create new citizen-journalists, and wanted these students to understand what was going on around them.

That’s the point the anti-Breitbart smear machine could never understand, Breitbart wasn’t working hard to promote his politics or his ego – he was motivated by his love for this country, a quest for the truth, and for the future of our children.

In a way, it is ironic that when Andrew died four years ago; it was just before the Jewish holiday of Purim. Like many Jewish holidays, Purim’s theme is “they tried to kill us, we won, let’s eat.” But what makes Purim different is that there is no overt splitting of the sea-type miracle. The story teaches us the victory came from God even though he was “hidden” during Purim. To celebrate Purim, Jews wear masks and costumes to hide our faces the same way God did.

Andrew Breitbart’s work was all about masks and hiding. He forced politicians and mass media figures to take off their masks–that spin and rhetoric covering so much of what citizens are still being told today. He fought hard to ensure that we would not be confused by the “happy-talk, everything is wonderful” costumes covering up the dangers ahead for America. At the same time, he created an army of truth-seekers, most of whom are still fighting seven years later.

When Andrew passed away the country lost a heroic warrior.  I lost a mentor and a friend. Andrew Breitbart made America a better, more transparent country, as he made those of us who had the joy of working for him better truth-seekers and people.

I am sure this week there will be many posts about Andrew, by people who never met Breitbart who claim “If Andrew was alive….” Horse crap! Even his closest friends, people such as Larry Solov or Adam Baldwin would never claim to know what positions Andrew Breitbart would take today. Besides with Andrew, it was never about him. Anyone who really wants to honor Andrew Breitbart’s memory, there is only one way to do it. Get off the sidelines! This is our fight now. As Andrew said in his last CPAC speech, “pick up a sword and join in.”

Andrew is no longer here to help us, but something tells me he is in heaven right now, warning God and some angels not to believe what that socialist Satan guy is saying.

May God continue to provide comfort to Andrew’s wife Susannah, their four kids and the rest of his friends and loved ones on this the anniversary of his passing. And may Andrew Breitbart’s memory continue to be for a blessing.

I miss you, friend.