Biden’s Only Accomplishment! More Americans Think Nation’s Best Days In The Past 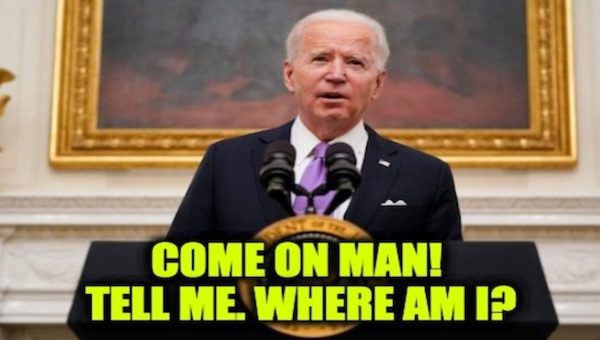 Joe Biden finally has registered one accomplishment. Americans are growing wary of the country’s future. Americas best days are past

Rasmussen on Friday released the alarming results of a new survey of likely voters, indicating that more American adults (43%) “now say America’s best days are in the past,” while only 33 percent think the best is yet to come, a stunning shift from last November when 47 percent of likely voters believed better times are over the horizon.

Joe Biden and Kamala Harris won the election in November. Since then, the percentage of American adults who think the best is past has increased 10 points, while 23 percent “are not sure” one way or the other.

Among the more worrisome trends, according to survey results, is “The decline in hope for America’s future is mirrored by a declining sense of fairness. Forty-nine percent (49%) say American society is basically fair and decent. In contrast, 38% believe America is unfair and discriminatory.” This past January, 54 percent of likely voters “viewed American society as basically fair and decent.”

But that may be an apples-and-oranges summation. A society on a downhill run can still be fair and decent, at least for a while.

Strangely, only 44 percent of both Democrats and Independents think America is “basically fair and decent,” while 66 percent of Republicans think so.

While it may not seem directly related, something happening now in Colorado may be a piece of this puzzle. As noted by the Washington Examiner, Colorado has become the first state in the country to repeal its state preemption statute, allowing a return of confusing and often contradictory local gun control measures. State preemption laws are in effect in more than 40 states, and they have worked to maintain uniformity of gun regulations from border to border in the states.

However, these laws have been a thorn in the side of gun prohibitionists, whose goal is to discourage gun ownership by whatever means possible. Creating an environment of confusing gun laws is an excellent way to accomplish that.

Writing in the Washington Examiner, Cody Wisniewski observes, “Gun-control advocates insist that some areas are especially violent and should be able to set stricter policies. But this is the usual fallacy on their part. Anti-gun activists seek to prevent crime by disarming law-abiding individuals rather than enabling those individuals to defend themselves against criminals (who are more than willing to breach local gun laws in the process of committing far worse acts).

“Some cities and towns are, indeed, more violent than others,” Wisniewski adds, “and in those places, peaceable citizens are in even greater need of armed self-protection. To leave them at the mercy of criminals is deeply immoral and detestable.”

The repeal by the General Assembly came in the form of Senate Bill 21-256, which—according to Wisniewski—is worded in such a way as to allow cities and towns to pass their own gun laws, but only if they are stricter than the state standard.

“The dial only turns one way,” Wisniewski observes. “But gun control advocates have worked hard to obscure this fact. Advocates of the repeal framed the new law as one focused on enabling ‘local control’ — a point that would be hard to argue with if it were actually true.”

“Local control,” he explains, “is a complete misnomer when the ‘control,’ like a ratchet, can only go in one direction: toward a tightening of the rules. That is not local autonomy but rather a centralized effort to promote greater restriction on individuals’ right to keep and bear arms.”

But being disingenuous is the modus operandi of the gun control movement and the far left in general. Joe Biden and his Democrat allies on Capitol Hill promised change, and the U.S. has gotten it with an end to energy independence, higher gas prices, rising inflation, an embarrassing foreign policy, and a president who often seems disconnected to reality and incapable of completing a sentence or a thought.

It is no wonder that Rasmussen’s daily presidential tracking poll shows Biden with a 56 percent job performance disapproval among likely voters and a 43 percent approval. Within those percentages, only 23 percent strongly approve of Biden’s performance, and 47 percent “strongly disapprove,” a more than 2-to-1 disparity.

A Quinnipiac poll of all adults (as opposed to the likely voters polled for Rasmussen) released on October 7th reported that  only38% of Americans approve of Biden’s job as president, and 53% disapprove.  Quinnipiac also says that 55% of Americans believe that the Biden administration is not competent in running the government.

On October 6th, The Trafalgar Group, a leading polling company like Rasmussen and Quinnipiac, released its poll of all American Adults. It reported Biden with a 40% approval and 56% disapproval.

Biden’s approval has sunk into the abyss, which is why, according to Rasmussen, “47% of Democrats now say America’s best days are in the future, only 29% of Republicans and 24% of those not affiliated with either major party agree.”

Americas best days are past

Americas best days are past

Americas best days are past,
Https://lidblog.com