75% Of Likely Voters (Including Most Dems) Support Voter ID Laws

The Democrats Are Ignoring The People's Wishes 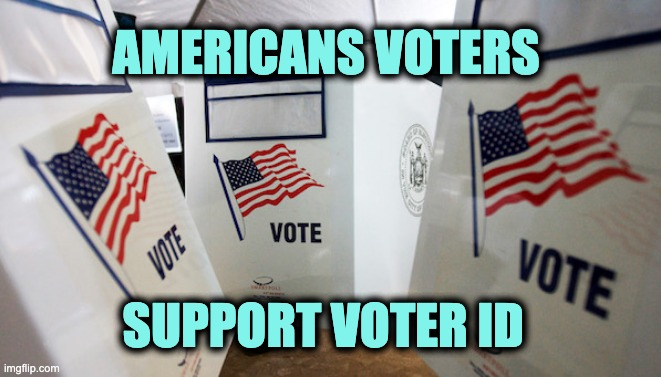 One of the most sacred rights and responsibilities of American citizenship is voting. We are supposedly guaranteed that every person’s vote is worth as much as every other person’s vote. That guarantee has never been perfect, Blacks weren’t allowed to vote until the 15th amendment in 1870, and women until 1920’s 19th Amendment, and only the big guy upstairs knows the full truth about the 2020 election. Still, the tradition of the United States has been to aspire toward honest elections. The Democratic Party bill HR1 crushes that tradition.  But this poll should serve as a warning to Democrats as it finds that 75 percent of likely voters support voter ID laws.

Among other fair election killing provisions, HR1, which was passed by the House and is moving to the Senate, federalizes elections, bans voter ID and sharing voter registration rolls to determine if someone is registered in more than one area, and forces states to permit presidential voting by mail.

Per a Rasmussion poll, support for voter ID runs across political parties. 60% of Democrats the party pushing HR1,  89% of Republicans, and  77% of unaffiliated voters support voter ID.  Support is also high for conservatives (91%) and moderates (68%). But almost half of the self-described liberals (47%) support voter ID also. Even likely voters who are African-American (69%) support  ID laws.

Photo ID is needed to get on an airplane, buy cigarettes, get into many office buildings, enter comedy clubs, and establish other establishments selling alcohol. Photo ID is even needed at the Democratic National Convention to receive their official credentials (at the GOP convention too). Heck, you can’t even get into the DNC office in D.C unless you can prove who you are.

The Democrats claim that voter ID laws discriminate against minorities, which is their go-to answer to everything. But that raises two questions. Do they believe minority voters are too stupid to get a picture ID?  If a Picture ID is discriminatory, doesn’t that mean the Democratic Party is racist?

Voter ID restores faith in our elections and the guarantee of one man, one vote.  Based on America’s support of voter ID and the Democratic politicians’ rejection of it, we learn that their party doesn’t care about fair elections or what the voters—even their party’s voters, want.