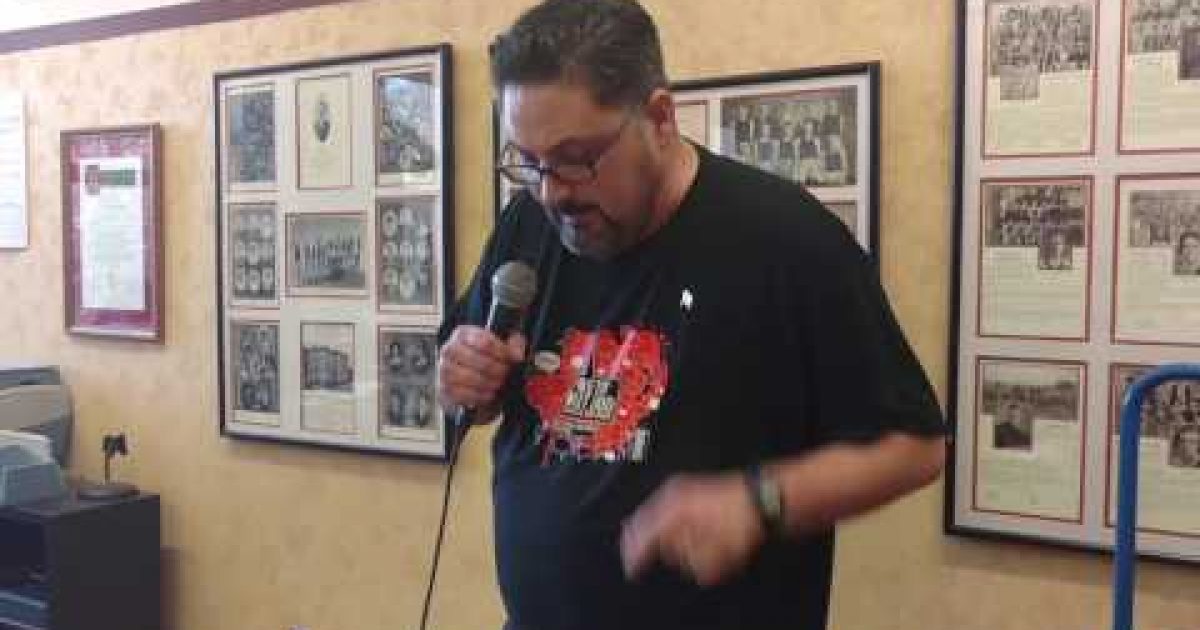 Liberals like to pretend they represent the “grown up,” more “tolerant,” and more “intelligent” side of the political divide in the U.S.A. and no where is this assumption more prominent than on the campuses of our fetid institutes of higher learning. But these days it seems that teaching hate is just as prevalent in our universities as it is on the battlefields where ISIS reigns.

It seems that these so-called “professors” and other teachers all across the country can wallow in as much hate as they want without repercussions from their administrations just as long as the brand of hate they are promulgating is anti-white, anti-Republican, and anti-Trump. And one of the most egregious cases has been occurring since the November election in none other than Washington D.C.’s Georgetown University.

But before we get to Georgetown it is instructive to note that the D.C. university is far from the only university with “teachers” sowing pure hatred amongst the captive audiences we all cal their students.

Just over the Christmas holiday the country was treated to an example of this kind of extreme hate oozing out of academia when a “professor” from Drexel University in Philadelphia decided Christmas was the right time to tweet out that he was wishing for a “white genocide” for the holidays.

George Ciccariello-Maher, an Associate Professor of Politics and Global Studies at Drexel as well as a “visiting researcher” at El Instituto de Investigaciones Sociales in Mexico, jumped to his Twitter account just ahead of Christmas to issue this heartwarming missive reading, “All I Want for Christmas is White Genocide.”

As the good “professor’s” tweet began to reverberate across the Twittersphere, Drexel University put out a statement calling the comments “deeply disturbing.”

Drexel became aware today of Associate Professor George Ciccariello-Maher’s inflammatory tweet, which was posted on his personal Twitter account on Dec. 24, 2016. While the University recognizes the right of its faculty to freely express their thoughts and opinions in public debate, Professor Ciccariello-Maher’s comments are utterly reprehensible, deeply disturbing, and do not in any way reflect the values of the University.

The University is taking this situation very seriously. We contacted Ciccariello-Maher today to arrange a meeting to discuss this matter in detail.

While he soon deleted the disgusting tweet, Ciccariello-Maher went on to insist that he was juuuust joking and that his tweet shouldn’t be taken seriously.

But whatever his motivations, one thing is sure, the university didn’t fire him immediately like it would have if the professor was juuuust joking about wishing for a “black genocide” for Christmas.

Ciccariello-Maher is not alone in spewing his hate as the era of Trump begins. The list of haters infesting our colleges, high schools, and grade schools is growing longer by the day. Just to list a few…

Then there is the Hispanic teacher who wrote a poem telling his students that “we love you no matter what,” unless, that is, you are a male or are a white person.

Well, this is just a partial list. There are many, many, many more out there.

This brings us to the hate-filled personal attack that Georgetown “professor” C. Christine Fair launched against Muslim journalism professor Asra Q. Nomani, one of Fair’s former colleagues at Georgetown.

Some may recall that Asra Q. Nomani wrote a much discussed article in The Washington Post on November 10 that explained why she, a Democrat and a Muslim, voted for Donald J. Trump for president.

In her piece, Nomani wrote, “I support the Democratic Party’s position on abortion, same-sex marriage and climate change. But I am a single mother who can’t afford health insurance under Obamacare” and noted that in West Virginia she knew far too many regular Americans who have been hurt by Obama’s policies.

Along with a list of other well thought out reasons, Nomani also pointed out that Trump’s ideas on the dangers of Islamic terror were far more realistic than the airy views of Obama and Hillary who imagine that there is noting to fear from Islam.

Nomani also pointed out that the left simply refuses to have a logic-based discussion on the merits of Trump and Hillary. As she noted in her article, anyone who said they were thinking of voting for Trump was immediately smeared as a hater and “red neck.” And true to her warning of the left’s intolerance, Nomani’s erstwhile colleague in education, C. Christine Fair, began a month-long assault on the Muslim Trump voter that has resulted in no action at all by her employers.

“Professor” Fair (and could there BE a more inapt name?) launched a long series of Facebook posts and Tweets calling Nomani every name she could think of including, “wretch,” “clueless dolt,” “slut,” “fame-monger,” Nazi,” and a “clown” who should “fuck off” and “go to hell.”

A group of these vile communications sent by the ironically named Professor Fair can be seen at The Daily Caller. But it is what the DC reports occurred with University officials that is more important.

Yes, Fair’s squalid social media posts is just a typical example of the hate infesting very liberal’s blackened heart, but what the college did — or rather what it didn’t do — is the more telling fact on the Nomani/Fair story.

Nomani brought this extreme harassment to the attention of her former employers at Georgetown but it appears that administrators are not interested in securing any safe spaces for “red neck Trump voters” like Nomani.

The Muslim professor even pointed out to university administrators that Prof. Fair is violating the school’s own code with her constant, month-long campaign of harassment in public. After several emails urging the school to obey its own guidelines, to date officials have done precisely nothing about Fair’s continued harassment of Nomani.

In response to this refusal to act, Nomani told DCNF, “The attacks against me by a professor at Georgetown University are particularly disturbing because Georgetown gave me a home to complete the investigation of the murder of my friend and colleague Danny Pearl by militants in Pakistan. I would like to see Georgetown uphold its values for peace and civil discourse. And I would gently urge anyone who is as disturbed as I am about Prof. Fair’s conduct to remain civil and not engage in any personal attacks because we have to be the civility we want to see in the world.”

Now, imagine what the school would have done if the politics of the situation were reversed, if, say, a Trump-supporting professor had so viscerally and viciously attacked a Muslim professor who had written about her support for Hillary.

Such a Trump-voting prof would have been fired faster than he might even be aware that a controversy had become public knowledge and likely before he would even have a chance to make any public statements on his own behalf. Without a doubt, a Trump-supporting professor caught in the act of harassing a colleague would be lynched immediately with gusto and malice and with no opportunity to respond. The destruction of such a person’s career would be instantaneous.

But in the case of this professor who has harassed a Trump voter, what has been done? Nothing. Nada. Zippo.

Sadly, infuriatingly, this is the world we live in. It is a world where hate can be taught in our system of (mis)education as long as it is hate for white men, Republicans, conservatives, and now President Donald J. Trump.