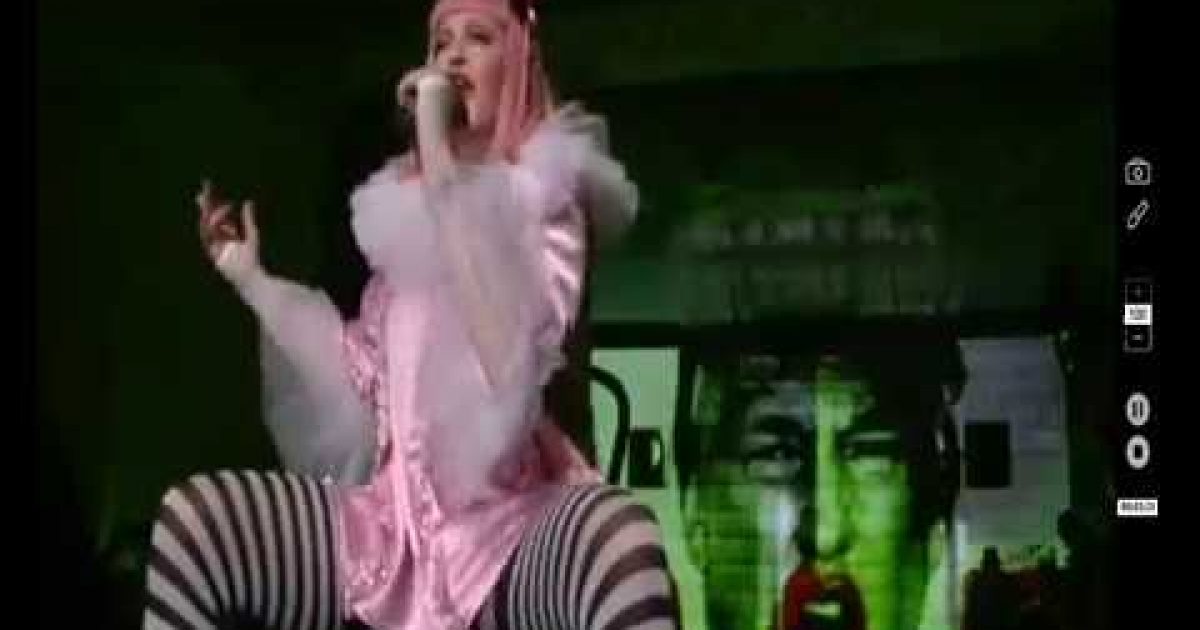 WARNING This Post has adult themes and language (it is about Madonna what did you expect?)

During the auction and concert, Madonna made a number of provocative comments. The staunch Hillary Clinton supporter, who had promised to perform sexual favors for those who voted for the Democratic presidential nominee, revealed she’d “slept in Donald Trump’s bed.”

“Now don’t go jumping to conclusions because he wasn’t in that bed. He wasn’t anywhere near that bed. He wasn’t even in the room. I was just doing a photo shoot in Palm Beach for the Versace campaign in his house,” she said, before criticizing the president-elect’s sheets. “I just want to mention that his sheets were not 100 percent Egyptian cotton. Yes. Cheap slumlord. Here’s what I’m wondering: Do you think he’s going to have nice sheets in the White House? Here’s one thing I’m sure of. They won’t be Egyptian cotton because we all know how he feels about Muslims, don’t we?”

Some audience members gasped at the last remark, but the Queen of Pop wasn’t done. She performed a slowed-down version of Britney Spears’ “Toxic” and sang, “You know that you’re toxic,” as images of Trump appeared on a large screen behind her.

The truth is America is more ashamed that Madonna is American than vice versa and its not just because of her rendition of Toxic which is embedded below.

Does Madonna really believe she is Jesus? It seems to me that she is being blasphemous.

She also inappropriately uses  Jewish symbols like in this scene from one of her videos:

Those are Tefillin (see picture next Madonna), Jews (like me) put them on when they pray most mornings. Inside the Tefillin are verses from the Torah. Jews believe command to wear them comes from God, Deuteronomy 11:18 says, “And you shall set these words of Mine upon your heart and upon your soul, and bind them for a sign upon your hand and they shall be for ornaments between your eyes.” Certainly her use of Tefillin is offensive to observant Jews.

Americans are also ashamed that the same singer who inappropriately uses religious symbols in her act, also uses Nazi symbols:

Americans are also ashamed about the time she performed in Turkey and decided to flash a nipple (sorry guys this is a family site).

Or all the other times she publicly flashed a breast or her arse, or even the time she called a fan onto the stage and pulled down the fan’s top. Her behavior gave new meaning to the term “ugly American”

If that doesn’t make one ashamed that Madonna is an American nothing will.

If you need more convincing how about that time she appeared on the David Letterman show and dropped 14 “f” bombs and that was the most family friendly part. She also gave the TV host a pair of her underpants and wondered why he wasn’t going to smell them, then called Letterman a “sick f—.”

There’s plenty more where those came from–but lets face it Madonna is an embarrassment to this country, maybe that’s part of why her children don’t want to have anything to do with her. The bottom line is that many patriotic Americans agree with Madonna–we are ashamed that she is an American also.