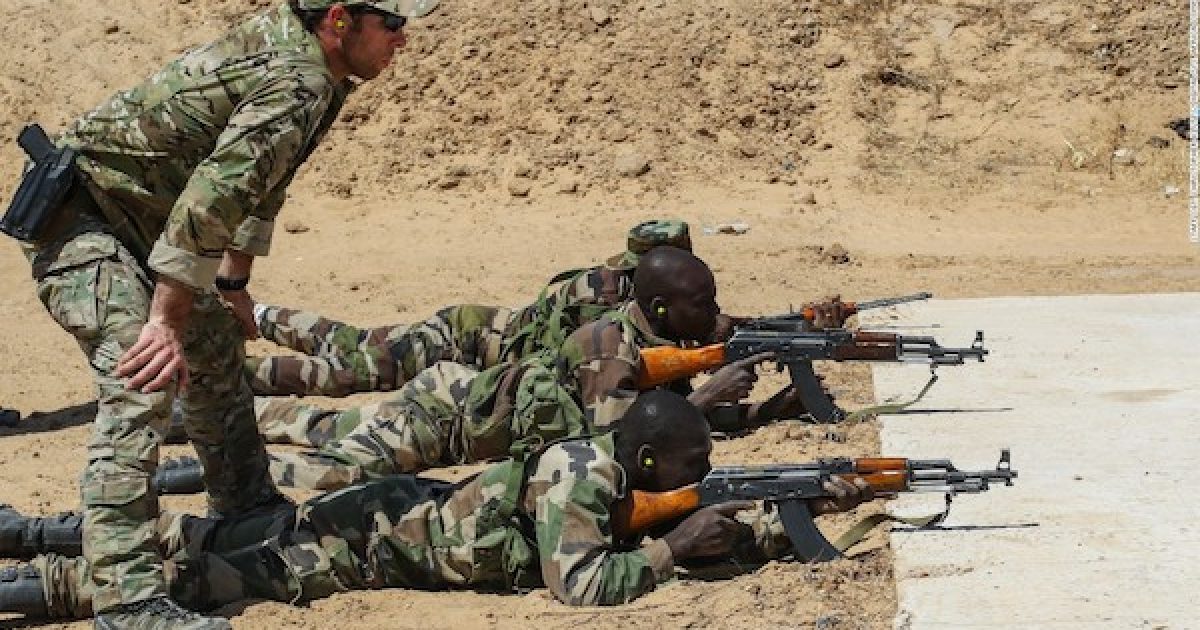 It’s also that many observers tend to know more about military operations; enough, at least, to understand that the ambush attack on Special Forces in Niger, on 4 October, is different from the terror attack in Benghazi because everything about the two incidents…is different.

The leftist media have been trying to drum up a chant that the deaths of four Army Special Forces soldiers in Niger is no-kidding-this-time Trump’s Benghazi.  Here’s Salon from last week:

Republicans were quick to accuse the Obama administration of crafting a faulty political narrative in the aftermath of Benghazi. Fox News told its viewers for years that Obama may have “sacrificed Americans” as part of a “political calculation” to win re-election.

Now that such an attack has happened on Trump’s watch, where are the specious accusations of a stand-down order?

As Patrick Poole recounts, the drumbeat has accelerated this week, with numerous mainstream outlets chiming in.

I had assembled virtually all of this article a week ago but got vectored onto other priorities before posting it.  Now that the media have decided to go to high warble on the deaths in Niger, however, it needs to go up.  The bones of it include the same things Patrick Poole turned up; e.g., that the reason we’re in Niger is that Obama put us there in 2013, and kept us there through the transition date with Trump in January and that U.S. Special Forces soldiers died in neighboring Mali in 2012, with virtually no coverage from the MSM.

But as this absurd media narrative has developed, the thing I want to emphasize is that deaths in combat, where there was an operational plan beforehand (Niger), are not comparable to the deaths of civilians where there was not any sort of operational plan beforehand — and indeed, the U.S. Government had gone out of its way to eschew any such planning (Benghazi).  If Trump ever has a “Benghazi,” it will have to be under the latter conditions.  And the attack in Niger does not meet them.

So, to frame this as Salon did last week here is the question again:

Now that such an attack has happened on Trump’s watch, where are the specious accusations of a stand-down order?

Problem Number One is that the ambush in Niger isn’t “such an attack.”  The attack in Benghazi was on the U.S. special mission compound, a virtually unguarded villa where the ambassador was spending the night while engaged on undisclosed diplomatic business.

There was a follow-on attack on the CIA Annex nearby.  There were no U.S. soldiers in sight, and it wasn’t a declared or acknowledged combat environment.  In fact, the State Department had gone out of its way to avoid having an overtly intimidating security presence there.  The only security resources beyond the ambassador’s personal detail and a handful of local Libyans were at the CIA Annex across town.  And those were limited.

None of the right questions about the highly vulnerable situation in Benghazi had been answered in advance.

In Niger, the ambushed Americans were Green Berets armed and on operational deployment.  This is a different situation entirely, one for which there must certainly be some specific answers after the combat deaths – but for which the operationally-right questions, about support, resources, and rapid response, had been answered in advance.

If there is a dubious circumstance, it would be how well the questions were answered.

CNN clarified exactly this, albeit inadvertently, a few days ago:

The failure to anticipate an attack and the fact there were no US rescue and recover assets close by meant nearly an hour went by before the evacuation of the two wounded and three dead US troops by French Super Puma helicopters could be completed.

Defense Secretary James Mattis said the rescue was timely stating: “I completely reject the idea that that was slow.” But he did say an investigation will determine if changes are needed. “We will look at this and say was there something we have to adapt to now? Should we have been in a better stance.”

Nearly an hour?  In remote Africa, that’s about what you’d expect.  Depending on conditions, it’s likely to be the best response time that could be achieved in a whole lot of places.

If there was a way to shave 5 minutes off of it, the investigation of the incident will reveal that.  No one wants to improve response time more than the Army and the SOF chain of command, in a situation like this.  But to imply that there must be a scandalous failure in a combat rescue response time of nearly an hour, under the conditions of the Niger ambush, is absurd.

It’s equally absurd to imply that any sort of delay makes the incident like Benghazi.  In Benghazi, the problem wasn’t a delay, it was the complete failure of the chain of command in Washington, D.C. to respond during the 13-hours-long incident at all.

Problem Number Two in trying to build a “Trump’s Benghazi” case is that there’s no way to hang the Special Forces mission in Africa around Trump’s neck.

That’s the implied premise of the “Trump’s Benghazi” theme, since the situation in Benghazi, in which unprotected Americans were so vulnerable to terrorist attack, was the creature of Obama’s Libya policy in 2011-2012.  To be a “Benghazi,” you’d have to make Trump’s link to the Niger operations fit that profile.

But it doesn’t.  The presence of U.S. Special Forces throughout Africa – many of them involved episodically in combat – was built up steadily by Obama, after George W. Bush planted the seeds for it in the Horn of Africa after 9/11.

Trump didn’t just inherit it; he inherited it under the orderly, doctrinal supervision of U.S. military commanders – unlike the Benghazi situation, where nothing was being administered, by anyone, according to security policy or established doctrine.

Without litigating the necessity or appropriateness of the Special Forces campaign in Africa, we do have to note how very much Obama expanded it.  Salon doesn’t.  Instead, Salon sort of fudges how much Obama had to do with it.

Most Americans may not even be aware that approximately 800 U.S. troops are stationed in Niger, a West African nation where jihadist groups have taken root. As part of the never-ending war on terror, the United States has also set up a drone base in Niger’s capital city of Niamey. Contrary to his focused commitment to reverse every policy put in place by his predecessor, President Donald Trump has decided to carry on with the construction of a second drone base in Niger commissioned by Barack Obama.

American forces have never been sanctioned to an official combat mission in Niger, a landlocked West African nation about twice the size of Texas with a population of just over 20 million people. But they have long been fighting against Islamic extremists in the country and surrounding region. On Oct. 4, four Green Berets were killed and two more injured after their group of a dozen U.S. soldiers were ambushed while conducting a joint patrol with about 40 Nigerien soldiers.

I actually think quite a few Americans know about our presence in Africa, even if Niger wouldn’t top the list of countries they could name without doing a Google search.  But let that pass.

The larger point here is that it was Obama who deployed U.S. forces to Niger, in 2013.  It was Obama who evolved their mission over the next few years from operating surveillance drones to training local forces for counter-terrorism.  It was Obama who stepped up their involvement in fighting ISIS in the nearby Lake Chad Basin (although, as Patrick Poole points out, the four U.S. soldiers were not ambushed in that area, but over on the other side of Niger, near Niamey).

The tragic deaths of 4 American & 5 Nigerien soldiers in an ambush on Oct. 4 occurred in Tongo Tongo. Which is here: pic.twitter.com/FMfwBDYbWj

Tongo Tongo is 733 miles from Diffa (as the crow flies). By road, that’s at least a 24-hour journey. 8/n pic.twitter.com/PQKPlOsIqJ

Obama expanded the Special Forces campaign significantly beyond Bush 43’s original footprint (which, again, I’m not arguing for or against.  But in terms of Trump being responsible for the policy and operating conditions of the mission in Niger, the situation simply isn’t analogous to Benghazi in 2012.  An established four-year-old military mission isn’t the same thing as a seat-of-the-pants experiment in unprotected diplomacy, in an open city over which terror gangs are fighting).

By December 2016, The Intercept noted that Obama had increased the SOF presence across Africa from about 700 in 2014 to 1,700 in 2016.  This all developed under the aegis of the Special Forces and U.S. AFRICOM chains of command, in accordance with established policy and doctrine – unlike, once again, the situation in Benghazi.

And then there’s Problem Number Three.  Problem Number Three is that three Special Forces soldiers – probably soldiers deployed to Niger, although the American public was never given that much information – were killed in a mysterious car crash in neighboring Mali in April of 2012.

That situation was potentially more analogous to the ambush of Green Berets on 4 October 2017.

Conservatives may have been wounded to the heart at the time, as they are to hear of this month’s combat deaths in Niger.  They were probably saddened even more to learn three years later that the soldiers in 2012 apparently died under conditions other than involvement in combat, or attack by terrorists.

If combat deaths can possibly be avoided, they should be.  But the death of soldiers is an inherent risk of deploying them into war zones.  Giving them a combat mission increases that risk.  Moreover, deploying military members comes with recreational behavior that doesn’t always turn out well; something that is not the president’s fault under any administration.  Soldiers can do things they regret and also serve with honor and distinction, and they often have.  The word about the soldiers who died in 2012 is that they fit that description.  War is, first and foremost, a human endeavor.

Conservatives tend to be consistent in recognizing all that.  Left-wing media are inconsistent (to the point of appearing confused and obsessed) in trying to overlay the singular template of Benghazi on Special Forces combat deployments.

Presumably, the effort to make a “Trump’s Benghazi” out of the Special Forces combat deaths in Niger this month won’t go very far.  If it does gather steam, feel free to point out Problems One, Two, and Three.  Come up with your own; there may be more out there.

Meanwhile, in memory of the soldiers killed in the war on terror, in the African-theater incidents in April 2012 and October 2017: