Fired Ambassador To Ukraine Accused Of Perjuring Herself To Schiff Committee 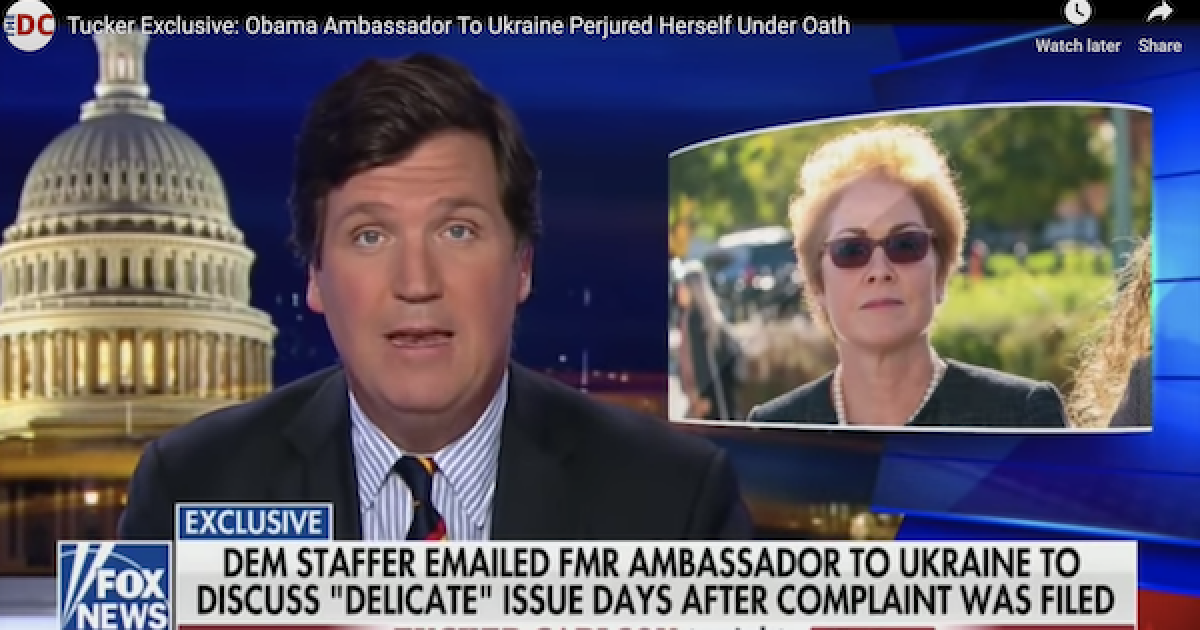 Marie Yovanovitch, the former  Ambassador to Ukraine, who was accused by a Senior Ukrainian prosecutor of preventing him from presenting evidence of Democratic Party and Hunter Biden wrongdoing to AG Barr may have perjured herself under oath during her recent appearance before Schiff’s Kangaroo court. Emails revealed Thursday by Tucker Carlson proved that she used her personal email account to responded to a Democratic congressional staffer’s email asking for a meetup about something,  “quite delicate” and “time-sensitive” matter — just two days after the “whistleblower” filed the complaint, and about a month before it became public and ignited the lastest Democratic Party effort to change the results of the 2016 election.

During her October deposition to the House Intelligence Committee,  Yovanovitch told U.S. Rep. Lee Zeldin (R-NY), about the email she received Congressional staffer, Laura Carey,  but said under oath that she never responded to it.

Per Tucker Carlson, the email said in part

I am writing to see if you would have time to meet up for a chat – in particular, I am hoping to discuss some Ukrainian oversight questions we are exploring. I would appreciate the chance to ground-truth a few pieces of information with you, some of which are quite delicate/time sensitive and thus we want to make sure we get them right.

The “emails obtained by Fox News’ “Tucker Carlson Tonight” showed that in fact, Yovanovitch had responded to Carey’s initial Aug. 14 email, adding that she “would love to reconnect and look forward to chatting with you.”

On Aug. 14, Carey reached out to Yovanovitch before noting that Carey had resigned from the State Department to join the House Foreign Affairs Committee staff performing oversight work. Aug. 14th was two days after the whistleblower complaint was filed and a month before that complaint became public. But we also know the whistleblower went to Adam Schiff’s team before filing the complaint. The question is, did Schiff’s office tell other Democrats on Capitol Hill what was in the complaint? And was that the “quite delicate” and “time-sensitive”  matter that Ms Carey wrote Yovanovitch

Yovanovitch denied responding to the email when asked about it by Rep. Lee Zeldin (R-NY).

“In fact, it turns out that she did respond.In fact, she said she ‘looked forward to chatting with you’ to that staffer. And as Congressman Zeldin pointed out, the ambassador’s original answer, which was dishonest, was given under oath.” And that, folks, is called, “perjury.”

Zeldin told Tucker Carlson on Thursday it was “greatly concerning” that Yovanovitch may have testified incorrectly that she did not personally respond to Carey’s email. Note: “Testifying incorrectly” is a nice way of saying she lied.

“I would highly suspect that this Democratic staffer’s work was connected in some way to the whistleblower’s effort, which has evolved into this impeachment charade,” Zeldin said. “We do know that the whistleblower was in contact with [House Intelligence Committee Chairman] Adam Schiff’s team before the whistleblower had even hired an attorney or filed a whistleblower complaint even though Schiff had lied to the public originally claiming that there was no contact. Additionally, while the contents of the email from this staffer to Ambassador Yovanovitch clearly state what the conversation would be regarding, Yovanovitch, when I asked her specifically what the staffer was looking to speak about, did not provide these details.

(…)I specifically asked her whether the Democratic staffer was responded to by Yovanovitch or the State Department. It is greatly concerning that Ambassador Yovanovitch didn’t answer my question as honestly as she should have, especially while under oath.”

The real questions are now, will anything be done about it, or will Adam Schiff and his fellow conspirators sweep it under the rug?  And Ambassador Yovanovitch also denied that she obstructed evidence of Hunter Biden and Democratic Party crimes from reaching A.G. Barr. Is that a lie also?

We will probably never know because Adam Schiff only wants to impeach the POTUS, he doesn’t care about the truth.