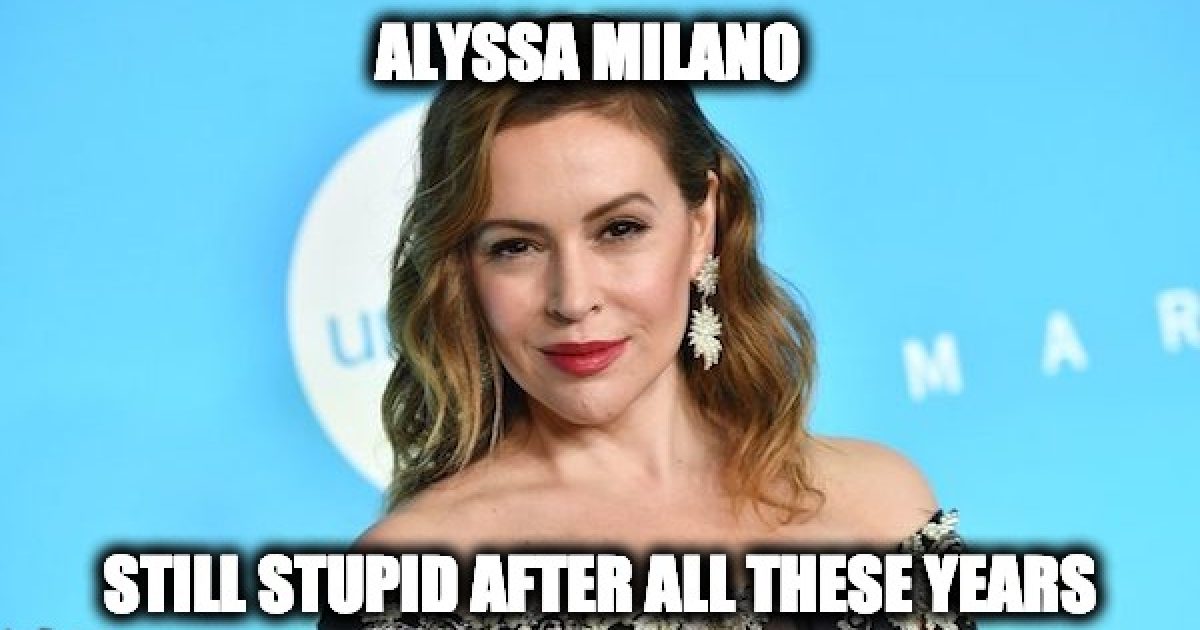 I came across this wonderful, and sarcastic (Busted, I love sarcasm) article on Twitchy about the brilliant political analyst Alyssa Milano.  You caught that sarcasm, right?  Anyways… It never ceases to amaze, mystify, and even entertain this author how Hollywood celebs among others can continue to be so ignorant.  Their ignorance is bordering on outright stupidity if we are going, to be honest here.  Thank God for James Woods.

Alyssa Milano just demonstrated that she is an entirely clueless liberal mouthpiece by her recent tweet.  Anyone that bothered to think for even half a nanosecond would realize the fallacy of her statement here. But hey, since when is thinking a requirement to be a card-carrying liberal?

“This is the part of the election cycle when the @GOP will paint the Dems as socialists to deter you from voting in 2020 for the party that actually fights #ForThePeople. They’ll drill the word “socialist” into our daily vernacular. Don’t be fooled. This is strategy, not sincerity.”

Sorry Alyssa but your tweet is stupidity not reality.

This is the part of the election cycle when the @GOP will paint the Dems as socialists to deter you from voting in 2020 for the party that actually fights #ForThePeople. They’ll drill the word “socialist” into our daily vernacular. Don’t be fooled. This is strategy not sincerity. https://t.co/BagOohjYz9

The GOP might do a lot of things, but in this case, “paint the Dems as socialists” is not one of them.  Seriously, how dense to you have to be to NOT understand that the Democrat Party is right out there in the open, plain for all to see – embracing socialism?

Maybe this is why?

The reason for the confusion on the left about socialism is that they really don’t understand the definition of socialism.

“You are correct in your assessment. Actually, it is a classic tactic from the playbook used by your fellow liberals, Rules for Radicals by Saul Alinsky, a well-known (wait for it) SOCIALIST!”

You are correct in your assessment. Actually it is a classic tactic from the playbook used by your fellow liberals, Rules for Radicals by Saul Alinsky, a well-known (wait for it) SOCIALIST! https://t.co/bzf4RCYrma

a-dah, just like that another liberal is schooled by James Woods!  Gotta love it.

Alyssa also claimed in her tweet that Democrats are FOR the people.  My question to Alyssa is: What exactly are the Dems doing or have they done FOR the people?  That is beside screwing them every chance they get of course.

The Democrats are for raising taxes, Nancy Pelosi even said so, how is that FOR the people?

The Democrats are for open borders, sanctuary cities and sanctuary states – which are even willing to protect killers, not to mention all illegals, drug dealers, and violent criminals.  How exactly does that serve the people?

The Democrats are the ones continually attempting to incite violence to achieve their ends, not to mention spearheading hatred, insert Maxine Waters here – how does that serve the people’s needs?

The Democrats are all for infanticide, murdering babies even up to the day they are born, and this is acceptable and good FOR the people?

The Democrats are the ones guilty of Russian collusion – the Dems used a Russian dossier written by a discredited former British MI6 agent to attempt to end the presidency of Donald Trump.  One party weaponizes the U.S. government to take down the other party’s candidate and then president – how can any thinking person not see the extreme danger in this?

The Democrats including Obama and the better part of his cabinet, and Hillary were all in on the plan to take down President Trump – a plan I might add is STILL active.  But the Democrats and their RINO allies (Politicrats) serve the greater good FOR the people?

I really don’t think so.  But you see – I think, and that is the difference between me (as well as many other Americans) and Alyssa Milano.

Alyssa Milano, you should stick to acting, because you surely have no clue about what is right for this country – pretty much the same as your sister Alexandria Ocasio-Cortez, who is the award winner for stupidity.

Ever hear of the Green New Deal?  Read up on that and get back to us Alyssa.  I’m sure your words of wisdom will blow us all away (laughing).