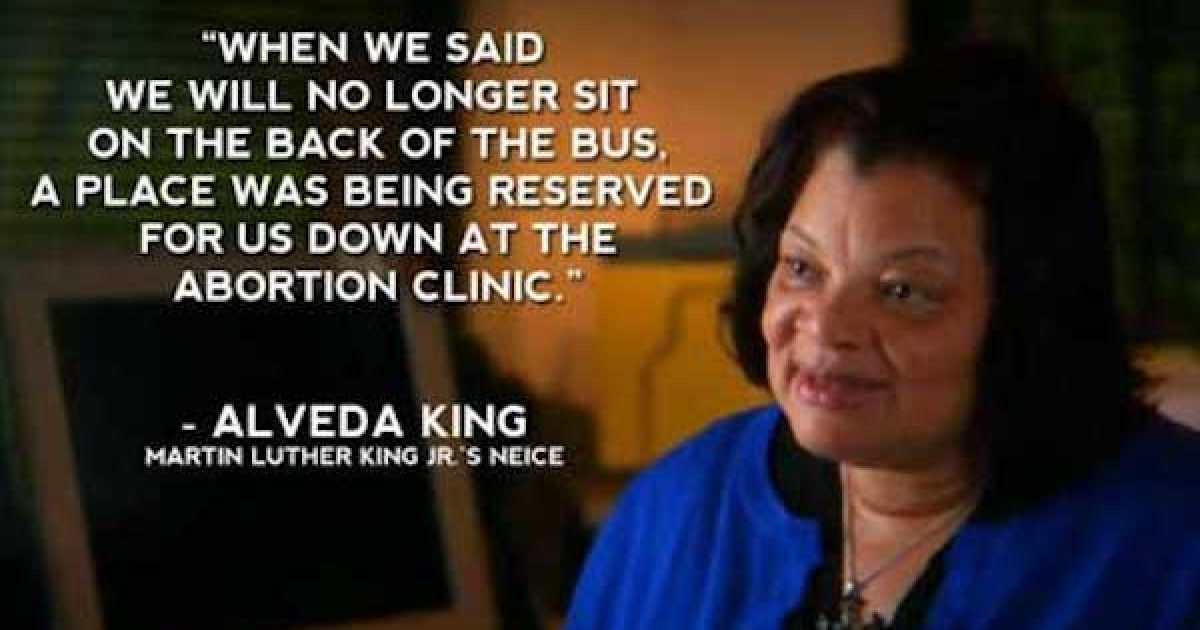 Recently, I spoke on my radio show with Evangelist Dr. Alveda King, the niece of Dr. Martin Luther King, Jr. She is the Director of Civil Rights for the Unborn with the organization Priests for Life. The focus was on Planned Parenthood and the African-American community.

Her comments are relevant all year round, especially around this time of MLK day and the anniversary of the Supreme Court decision favoring abortion, Roe v. Wade (January 22, 1973).

Dr. Alveda King told me, “The leading cause of death in the African-American community is not gang-violence, gun violence, heart attack, stroke, HIV, high blood pressure, diabetes. People will name all these. No, it’s abortion. And the reason we have come to that conclusion, statistically, you’ve got 60 million plus abortions legal in America since 1973. About a third of those occur in the African-American community. That means dead babies. And, with us being 13 percent or less of America’s population, that means we are having more abortions.”

She asked, “Now does it mean that African-Americans are more immoral or don’t care? Absolutely not. We are just regular, everyday people like everyone else. But Planned Parenthood moved into our community with the abortion killing centers and said, ‘We’re here to help you. Let’s kill your baby so you can have a better life.’ Well, killing our babies doesn’t give us a better life. I have had my own abortions in the 1970s. They were secret then, and after I became born again in 1983 and became a pro-life voice, I began to talk about how those abortions hurt me and my family.”

In 1921, Margaret Sanger founded the Birth Control League, which later changed its name to Planned Parenthood. Dr. Paul Kengor, the author of Takedown, writes about when Sanger spoke to the Ku Klux Klan in Silver Lake, New Jersey in May 1926: “The Planned Parenthood founder’s KKK talk was a smash hit. Not only did it go very late, after a very long wait, but she received numerous invitations to speak to other groups like the Klan. Why would the KKK be so interested in Ms. Sanger? The reasons are obvious, a natural fit. It was because Sanger was a passionate racial eugenicist with grandiose dreams of ‘race improvement.’”

Alveda King told our listeners: “Margaret Sanger, the founder of the Birth Control League [later, Planned Parenthood], said, that ‘colored people are like weeds,’ and they need to be eliminated. They need to be exterminated. We don’t want the word to get out, so let’s not package it that way. So that’s why they began to make a lot of propaganda and marketing materials, saying that abortion is a woman’s right. It will help her to finish college, get a job, do this or do that.”

Christian author and educator Dr. George Grant points out that it was not just the African-American community Sanger targeted for population control: “Now for Margaret Sanger and her followers, those undesirable aspects of humanity were largely ethnic minorities: blacks, Jews, often Slavic peoples from Eastern Europe. These were considered undesirables, ‘imbeciles’ she called them, ‘human weeds’ she called them; and so Planned Parenthood was initially designed to limit the populations of those peoples and to increase the population of what she felt were the desirable races. So right at the heart of the philosophy of Planned Parenthood is this ideological and scientific commitment to a kind of racism.”

Sanger did not want it known that she believed blacks should be targeted for a significant reduction in their population. She wrote, “We don’t want the word to go out that we want to exterminate the Negro population.” (Margaret Sanger, Letter to Dr. Clarence J. Gamble, December 10, 1939.)

Alveda notes that Planned Parenthood said in effect, “We don’t want the word to get out, so let’s get a slick marketing plan.” That plan included such things as handing out awards (such as to her uncle—a few years before Planned Parenthood began to do abortions, beginning in 1970) and scholarships. She said, “So many people rose to success on the backs and bucks of Planned Parenthood—the radical, feminist movement, for example—a lot of people who have been elected…the Congressional black caucus—many of them were put in office and are still in office because of dollars from eugenicists, such as Planned Parenthood.”

Alveda King concludes, “That’s a baby in the womb, who should have human rights, and I believe if my uncle were here today, he would have to agree that abortion is a crime against humanity.”