It's Time For The Democrats To Get A Life 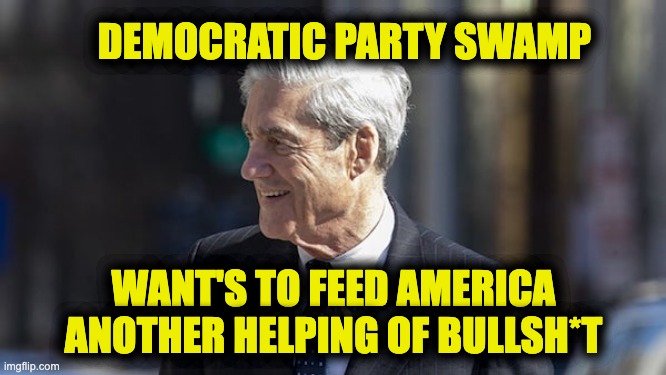 It has been years since the Democratic Party began hanging their hat on the “RussiaGate” ruse, and, despite the bombshells that have emerged from John Durham’s investigation into the political malarky, some are still very much convinced in its truth.  alternate Mueller report

We need to remember that Donald Trump was never charged with a crime.  Not after 22 months and $25 million.  Not after the full weight of the federal government laid upon him.  Never!

But Still, the Democrats persist, and now it appears as though Biden’s DOJ is considering delving back into the fray

An unpublished investigative compilation sometimes referred to as the “Alternative Mueller Report” has been located in Justice Department files and could be released soon, according to a letter filed in federal court Thursday.

A top deputy to Special Counsel Robert Mueller [and Donald Trump hater], Andrew Weissmann, revealed in a book he published last year that the team he headed prepared a summary of all its work — apparently including details not contained in the final report made public in 2019.

“At least for posterity, I had all the [team] members … write up an internal report memorializing everything we found, our conclusions, and the limitations on the investigation, and provided it to the other team leaders as well as had it maintained in our files,” wrote Weissmann in “Where Law Ends: Inside the Mueller Investigation.”

The reference prompted the New York Times to submit a Freedom of Information Act request for the document in January and to follow up in July with a lawsuit in U.S. District Court in Manhattan.

Lawyers from the U.S. Attorney’s Office in Manhattan told Judge Katherine Polk Failla in a letter Thursday that officials have figured out what document Weissmann was alluding to and have begun reviewing it for possible release.

“Since Plaintiff filed its complaint, Defendant has located and begun processing this record and intends to release all non-exempt portions to Plaintiff once processing is complete,” Assistant U.S. Attorney Jennifer Jude wrote. “Defendant estimates that primary processing of the record will be complete by the end of January 2022 at which time Defendant expects to send the record to several other DOJ components for consultation.”

This document came from the subgroup of investigators who were specifically focused on Paul Manafort, and there is no telling if other teams compiled similar reports.

Perhaps Merrick Garland nor anyone else in the DOJ watches the news on TV or reads a newspaper. Because on November 4th special prosecutor John Durham arrested a Russian national who allegedly worked as the researcher for Christopher Steele’s infamous dossier. The Russian,  Igor Danchenko, lied to the FBI on five different occasions between March and November 2017. The indictment claimed that Steele’ relied primarily” on Danchenko “to collect the information that ultimately formed the core of the allegations found” in the dossier. And much of the dossier was invented. Which is a nice way to say it was something false that he pulled out of his arse.

The 39-page indictment detailed the saga of how the FBI relied on Danchenko’s information to obtain the FISA warrants for wiretapping the Trump campaign. The indictment clearly mentions that the dossier itself was compiled at the behest of the Clinton campaign.

Did anyone in the DOJ read the Durham indictment?  I am sure they all did and know that the basis for the Mueller investigation was the Steel Dossier. Now thanks to John Durham, the Steele Dossier looks as convincingly real as a guy with a combover walking outside on a very windy day.

The ONLY reason to dig up any collection of notes from Andrew Weissmann about a scandal that has been proven wrong as many times as Biden is old is to attack Donald Trump’s reputation. But Merrick Garland may still try even though it’s time for the AG and his friends in the Democratic Pary swamp to get a life, move on, and maybe try to fix the real issues facing American citizens.