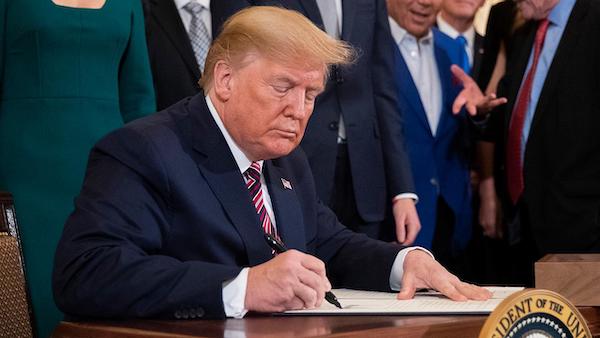 As anyone who has ever served on the board of an organization knows, “no good deed goes unpunished.” There is no better example of that expression than President Trump’s executive order (EO) to fight Antisemitism signed last week. While designed to stop the growing problem of anti-Jewish hatred on American college campuses, it has the potential of protecting Jews way beyond colleges. But America’s liberals and the leftist media are worried about the 2020 election, so they disparaged the order by raising dishonest questions about how it addresses Jewish nationhood and freedom of speech. But behind those dishonest questions is the goal of the anti-Trump resistance since inauguration day 2016, delegitimize the Donald Trump presidency by making him look like a bigot.

Anti-Semitic incidents have increased in America since 2013, particularly in schools and on college campuses. Understand that the issue on college campuses is no longer what we might consider classic Antisemitism such as the blood libel, but it has morphed into attacks on anyone who expresses an infinity toward the Jewish State of Israel.

According to the AMCHA Initiative, a nonpartisan organization that tracks Antisemitism on American campuses.  Anti-Semitic acts involving the unfair treatment of Jewish and pro-Israel students or attempts to exclude them from campus activities more than doubled. Per their report, many of those acts calling for the total boycott or exclusion of Zionist students or expression from campus life nearly tripling. Most troubling is that it’s not just the students pushing hatred. The report reveals a dramatic increase in faculty participation in academic BDS promotion and implementation and Israel-related anti-Semitic expression from 2017 to 2018

One of the problems with fighting Antisemitism from a government standpoint is there has been no standard definition of what constitutes an anti-Semitic act.  To make fighting this hatred easier, President Trump’s EO defined Antisemitism and provided the government with direction on how to fight the hate. It also gives colleges guidance to fight Jew-hatred. Thus schools that ignore Antisemitism in curriculum, staff, professors, or student activities can find themselves losing federal dollars.

The order was based on a bill introduced in Congress by a Baptist, Rep. Doug Collins (R-GA). It was called the Anti-Semitism Awareness Act of 2019. The bill was tabled in August by the Congressional Democrats probably because of the anti-Semitic views and BDS support by many in the House Democratic Caucus.

The President’s executive order made it clear that Title VI of the Civil Rights Act of 1964 applies to hatred against Jews. The EO states in part:

Understand that while the Administration enacted the EO to help Jewish students on college campuses. Title VI isn’t limited to colleges. It prohibits discrimination in any program or activity receiving federal dollars.

One of the oldest debates about Judaism is whether it’s just a faith, or a faith, and a nation or race. This executive order was smart enough to avoid that issue. That didn’t stop many in the liberal media, including the NY Times,  The Boston Globe, and The Washington Post, just to name a few, from ordering op-eds incorrectly claiming the order defined the Jews as a race and/or a nation.

The executive order considers Jews as a special protected class. This not a new concept. In 2010 the Department of Justice explained that  Title VI applies to discrimination against Muslims. Sikhs, Jews, and other faiths when the discrimination is based on the group’s actual or perceived shared ancestry or ethnic characteristics or when the bias comes from an affiliation with a country where one faith is dominant. In other words, if one discriminates against Catholics because they think Italy is a fascist state the DOJ may come knocking (or the Cosa Nostra). The perceived shared ancestry part does not connect these faiths to nationhood. It covers biases such as there’s a worldwide Jewish conspiracy that runs the banks or all Muslims are terrorists.

This EO’s most crucial policy change is that it defines what is meant by Antisemitism for the government.  Giving the order legitimacy is that the order uses an internationally recognized definition created by the International Holocaust Remembrance Alliance (IHRA). That definition includes hatred based on the claim that Jews have no right to self-determination. The definition was adopted by the State Dept. during the Obama years but was never used domestically.

The IHRA definition begins with:

“Manifestations might include the targeting of the state of Israel, conceived as a Jewish collectivity. However, criticism of Israel similar to that leveled against any other country cannot be regarded as anti-Semitic. Antisemitism frequently charges Jews with conspiring to harm humanity, and it is often used to blame Jews for “why things go wrong.” It is expressed in speech, writing, visual forms and action, and employs sinister stereotypes and negative character traits.”

The more contemporary part of the IHRA definition includes provisions that some left-wing Jews find controversial. They include labeling anti-Semitic actions such as claiming there is a worldwide Jewish conspiracy controlling the items such as the economy, media, govt. Holocaust denial or revisionism, suggesting American Jews have a dual loyalty between the US and Israel. As mentioned above, it includes denying the Jewish people their right to self-determination and also claiming that the existence of a State of Israel is a racist endeavor.  Applying double standards toward Israel by requiring of it a behavior not expected of other democratic nations is included, as is the classic examples of Antisemitism such as claims the Jews killed Jesus, or blood-libel against Jews, Israel or Israelis. Finally, the list says comparing the Israeli government policies to the Nazis; and blaming all Jews for the policies of the govt. of Israel are also anti-Semitic.

Perhaps that’s why the IHRA definition wasn’t used domestically because of some of the above, especially the part about applying double standards toward Israel by requiring of it a behavior not expected of other democratic nations was continually violated by former President Barack Obama.

President Trump’s order also directed federal agencies to get back to him within 120 days with a report of other ways the government can use nondiscrimination authorities to address Antisemitism, which may also result in expanding the order beyond the college campus.

On the other hand, extremist Liberal Jewish groups like the anti-Israel J Street had a fit.  Jeremy Ben-Ami J Street’s President said, “This executive order, like the stalled congressional legislation it is based on, appears designed less to combat antisemitism than to have a chilling effect on free speech and to crack down on campus critics of Israel.”

Not true, the order doesn’t stop people from criticizing Israeli policies. But for example, the BDS movement is not anti-Semitic for criticizing Israel’s policies.  It is anti-Semitic  because it bases its attacks on fabricated tales of human rights violations, double standards, false comparisons to apartheid South Africa, and bogus accusations of “war crimes.”  This movement has just one purpose, to delegitimize Israel and to deny the Jewish people their right to self-determination. The present leaders of the BDS movement support a “one-state solution,” which will destroy Israel as the Jewish state.

The Jewish Democratic Council of America used the President’s order as an opportunity to regurgitate the fraudulent charges they made after Trump’s speech to the American Israel Council. Charges that were revealed as lies on these pages last week. “The day after yet another attack on Jewish Americans, and just days after President Trump characterized Jews as money-hungry ‘killers,’ President Trump has zero credibility to take meaningful action to combat the scourge of antisemitism for which he is partially responsible.”

Why are the liberal media and leftist groups claiming the EO labels the Jews as a separate nation, and stifles free speech? The answer can be given with four numbers…2-0-2-0. The 2020 election. Part of their strategy to delegitimize this presidency is to convince the country that Trump is a hater and an anti-Semite

But that false narrative is destroyed by the Trump EO and other actions he’s taken since Inauguration Day. Truth be told. President Trump can legitimately claim that he has been the best President for the Jews? He can make this claim for a host of reasons. He killed the Iran deal, recognized Israel’s sovereignty over Jerusalem and the Golan Heights, moved the  US embassy to Jerusalem, stood up to the United Nations, his 2017 Executive Order that the government should vigorously enforce Federal law’s robust protections for religious freedom, his is 2018 establishment of a White House Faith and Opportunity Initiative, and other actions has won the hearts of many Jew. Last week’s Antisemitism executive order seals the deal, especially when one adds that the  Democratic Party has failed to address the systematic Antisemitism within their ranks.

The 2020 election less than a year away, and the Trump resistance doesn’t want anything to ruin their hard work. They’ve spent three years lying about this President calling him a hater and anti-Semite.  But whether someone wants Donald Trump to be their president or not, one must understand the truth. The claims by the far left, which runs the Democratic Party, and their minions in the MSM are deceitful. They are leveling fraudulent charges about this executive order, making untruthful accusations that he’s used anti-Semitic language or other hate speech as a strategy. They are more concerned about making this President look toxic for the 2020 election than any concern for the Jewish people or any other minority.