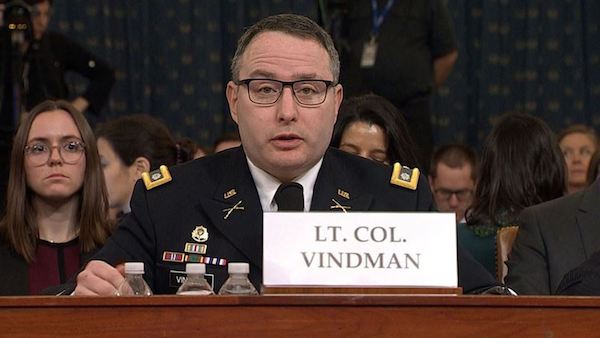 Lt. Col. Alexander Vindman, who testified against President Trump, retired from the Army Wednesday. Per his attorney, the reason for his retirement was “a campaign of bullying, intimidation and retaliation” for cutting short his military career. Of course, the mainstream media has been all over his attorney’s claim, and cite his testimony as a reason for the supposed bullying. The liberal media ignored the fact that Alexander Vindman is no martyr. He was accused by a U.S. Senator of possibly being a leaker who thought he could overrule the President’s foreign policy decisions.

Per J.E. Dyer at Liberty Unyielding:

Senator Tammy Duckworth (D-IL) has also been threatening to hold up the promotions of 1,100 officers if she isn’t convinced that the Trump White House has refrained from intervening improperly in the promotion process for LTC Vindman.

The CNN report, however, makes it pretty clear (if only inadvertently) what has actually happened.  For one thing, down deep in the story, CNN cites a Defense Department official who said Vindman was in fact selected for promotion to colonel.  So that’s not even an issue.

According to CNN, “The official also said that [Defense Secretary] Esper had already approved the list of promotions put forward by the Army, including Vindman’s promotion to colonel, and that list was still scheduled to go to the White House on Wednesday.”

Vindman’s promotion was coming and shouldn’t have been an issue. What should be an issue is the Sen. Ron Johnson letter exposing. Col. Vindman as a possible anti-Trump leaker and someone who believed the foreign policy consensus determined policy—not the President.

Johnson went to Ukraine as part of the U.S. delegation to President Volodymyr Zelensky’s inauguration on May 20. Vindman was part of the delegation also. In his letter, the Senator suggested that Lt. Col. Vindman may be among the government bureaucrats who aim to push back on Trump’s policies “by leaking to the press and participating in the ongoing effort to sabotage his policies and, if possible, remove him from office.”

As Chairman of the Homeland Security Committee and a member of the Foreign Relations Committee, Senator Johnson was intimately involved in U.S. foreign policy, including our relations/policy with Ukraine.

In the letter Johnson wrote about joining members of the U.S. Executive Branch’s delegation to the inauguration of the new Ukraine president:

The main purpose of my attendance [as part of delegation sent to inauguration of new Ukraine president] was to demonstrate and express my support and that of the U.S. Congress for Zelensky and the people of Ukraine.   In addition, the delegation repeatedly stressed the importance of fulfilling the election mandate to fight corruption, and also discussed the priority of Ukraine obtaining sufficient inventories of gas prior to winter.

Two specific points made during the meetings stand out in my memory as being relevant.

The first occurred during the country briefing.  I had just finished making the point that supporting Ukraine was essential because it was ground zero in our geopolitical competition with Russia.  I was surprised when Vindman responded to my point. He stated that it was the position of the NSC that our relationship with Ukraine should be kept separate from our geopolitical competition with Russia.   My blunt response was, “How in the world is that even possible?”

I do not know if Vindman accurately stated the NSC’s position, whether President Trump shared that viewpoint, or whether Vindman was really just expressing his own view.  I raise this point because I believe that a significant number of bureaucrats and staff members within the executive branch have never accepted President Trump as legitimate and resent his unorthodox style and his intrusion onto their “turf.”  They react by leaking to the press and participating in the ongoing effort to sabotage his policies and, if possible, remove him from office.  It is entirely possible that Vindman fits this profile.

The Wisconsin Senator went on to slam the opening statement Vindman made during the “secret” part of his Schiff committee testimony as an insubordinate view of foreign policy chain of command.

Quotes from the transcript of Vindman’s opening remarks and his deposition reinforce this point and deserve to be highlighted.  Vindman testified that an “alternative narrative” pushed by the president’s personal attorney, Rudy Giuliani, was “inconsistent with the consensus views of the” relevant federal agencies and was “undermining the consensus policy.”

Consensus policy? The last line was significant in itself. It was an indication of what Vindman thought of his authority visa viz Presidential power. Because there is no such thing as a consensus policy. Foreign policy comes from the President–it is a consensus of one, and Johnson agrees.

Vindman’s testimony, together with other witnesses’ use of similar terms such as “our policy,” “stated policy,” and “long-standing policy” lend further credence to the point I’m making.   Whether you agree with President Trump or not, it should be acknowledged that the Constitution vests the power of conducting foreign policy with the duly elected president.  American foreign policy is what the president determines it to be, not what the “consensus” of unelected foreign policy bureaucrats wants it to be.  If any bureaucrats disagree with the president, they should use their powers of persuasion within their legal chain of command to get the president to agree with their viewpoint.   In the end, if they are unable to carry out the policy of the president, they should resign.  They should not seek to undermine the policy by leaking to people outside their chain of command.

Also, in the letter, Johson described a meeting he had with the President (along with Rick Perry, Kurt Volker, and Gordon Sondland), which seemed to back up the President’s claim of reservations about giving aid to a corrupt Ukraine.

As for the reasons the aid was being held up, the President’s own rationale to Sen. Johnson was the same as he gave publicly.

Johnson called Trump on August 31, before the Senator’s September trip to Ukraine and other European countries, Johnson asked Trump if he could tell the Ukrainian President that the hold on aid would be lifted, When Trump said no, Johnson asked about any quid pro quo:

I asked him about whether there was some kind of arrangement where Ukraine would take some action and the hold would be lifted.  Without hesitation, President Trump immediately denied such an arrangement existed. As reported in the Wall Street Journal, I quoted the president as saying, “(Expletive deleted) — No way.  I would never do that.  Who told you that?”  I have accurately characterized his reaction as adamant, vehement and angry — there was more than one expletive that I have deleted.

The mainstream media is all agog over  Lt. Col. Vindman’s retirement and his attorney’s claim he had to endure “a campaign of bullying, intimidation, and retaliation.” But per Reuters, Secretary of Defense Esper signed off on Vindman’s promotion to colonel on Monday, two days before the Army officer announced his retirement.

What really upset Vindman was explained by my friend J.E. Dyer at Liberty Unyielding:

The problem for Vindman was not that he wouldn’t promote; it’s that he wouldn’t be deployable in his Foreign Area Office (FAO) role (specializing in Eurasia, chiefly Russia and Eastern Europe) because he went to Congress and testified as to his opinion that the the president – his commander-in-chief and the chief of U.S. foreign policy – had made missteps in the execution of foreign policy.

More than the fact he testified against this particular President per se, but when the content of his testimony is combined with Johnson’s letter, it is an indication he can not be trusted to follow the foreign policy chain of command. Ignoring the Consitution, Lt. Col. Vindman believes the “consensus” can overrule the President on foreign policy.

But instead of reporting the facts about why he couldn’t be trusted, the media and Senator Tammy Duckworth (D-IL) have set him up as a martyr.

Johnson to Jordan Nunes by Jeffrey Dunetz on Scribd