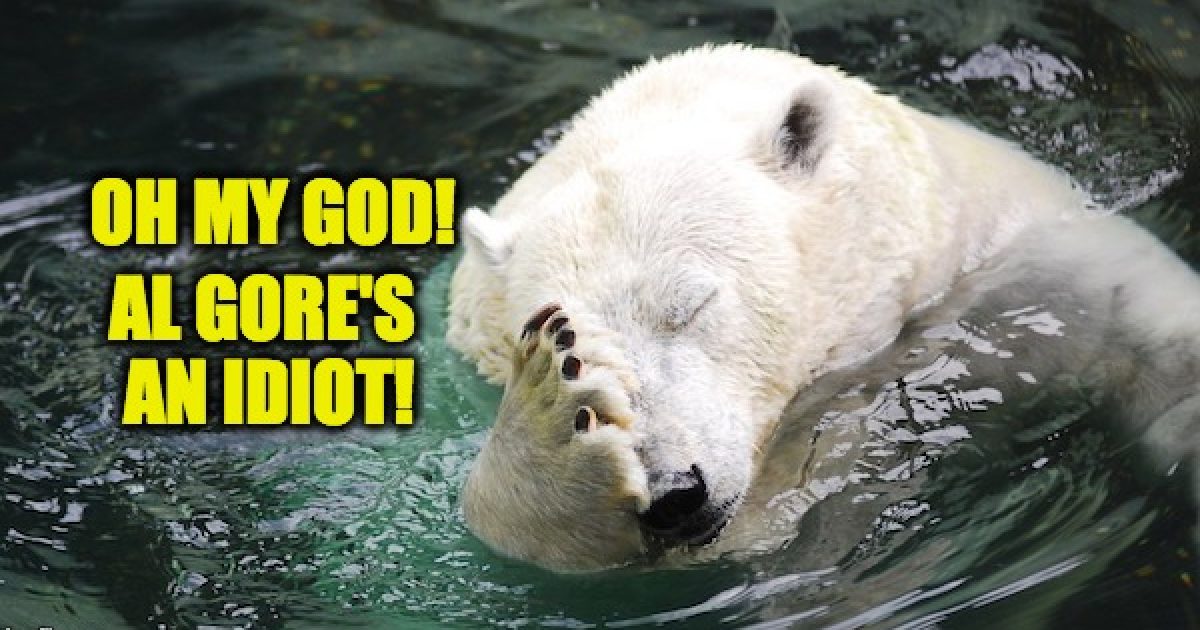 Al Gore, in a desperate attempt to save his wacko climate change/global warming claims in the midst of one of the coldest winters ever, stated:

It’s bitter cold in parts of the US, but climate scientist Dr. Michael Mann explains that’s exactly what we should expect from the climate crisis. https://t.co/6UfJ9Xxpq6

Science: “the intellectual and practical activity encompassing the systematic study of the structure and behavior of the physical and natural world through observation and experiment.”

Every winter there are crazy fools who try to claim that colder is caused by warmer. Technically climate ‘change’ is real because the weather is cyclical. But using it as a weapon to force people to an agenda, trying to scare people, is wrong.

“Kevin Trenberth, a scientist with the National Center for Atmospheric Research, said “winter storms are a manifestation of winter, not climate change.”

“The Arctic is greatly affected by climate change and it has a feedback effect – but not in winter,” Trenberth told The Daily Caller News Foundation. “It is not a cause but a part of climate change.”

“Such claims make no sense and are inconsistent with observations and the best science,” University of Washington climatologist Cliff Mass said of claims made by Mann and others. “The frequency of cold waves have decreased during the past fifty years, not increased. That alone shows that such claims are baseless.”

“And on a personal note, it is very disappointing that members of my profession are making such obviously bogus claims,” Mass said. “It hurts the science, it hurts the credibility of climate scientists, and weakens our ability to be taken seriously by society.”

How media would portray repeat of blizzard in 1888… “produced snowdrifts in excess of 50 feet” https://t.co/HC4g55a29k They would undoubtedly blame on “global warming” Joe Bastardi is correct that such extreme events (analogs) have occurred in past. @BigJoeBastardi pic.twitter.com/thfbw368Hh

It has been very cold — compared to the last 30-years — and compared to history with many records SHATTERED. Over the past 10-days (Dec 25-Jan 4), daily temperatures east of the Rockies have been 10°F to 25°F below normal centered on Midwest & Great Lakes & New England. pic.twitter.com/vBaFIRHMRj

For those who claim USA/Canada nor’easter is stronger because of “global warming”, they apparently do not realize that its so strong because of especially strong horizontal temperature gradient in troposphere. It “bombed” because of usually cold air! https://t.co/Lor2i47fC0

1978 midwest blizzard more impressive display as pressure fell to 955 mb well removed from ocean which would add more heat naturally. Stating that any storm are sign of climate change reveals ignorance of past major events that are comparable or more impressive

Al Gore’s “Inconvenient Truth” Documentary claimed that “global warming would destroy snow from our lives.”  It claimed that coastal cities would be inundated by water from melting ice caps by 2013 – hasn’t happened. That’s not “science,” that’s fear-mongering and not based on fact. His ridiculous claims fueled the agenda of Obama to ratchet down regulations on everything in America, even to naming “climate change” as the number 1 security threat to the nation.

Thank goodness for President Trump, who pulled the plug on that garbage and even withdrew from the Paris Climate Accord.

“Never mind that the media used to claim that the polar vortex was a sign of global cooling back in the 1970s,” Mr. Morano said in an email. “Never mind that climate activists warned repeatedly that snow would be a thing of the past due to ‘global warming.’”

It was ignorant of Al Gore and his cronies to push that the sky was falling because of a warming trend in the cycle…or it was an agenda to control and had nothing whatever to do with science. In January of 1892, dandelions bloomed in Pittsburgh parks. On December 31, 2017, there was record heat in Europe. And the East Coast is in the grip of record cold as of this writing.

On this date in weather history in #Pittsburgh dandelions were in bloom in the parks 126 years ago (1892). Picture taken from weather summary from the 1890s. #pawx pic.twitter.com/9yic1B32nI