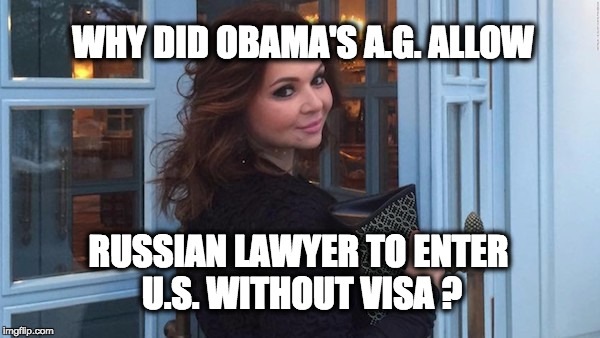 Many congressional Democrats are bloviating that fact that Donald Trump Jr even met with the Russian lawyer was treason. But if Junior’s meeting with the attorney is the modern equivalent of the Rosenbergs giving our nuclear secrets to Russia— why did former Attorney General Loretta Lynch give her special dispensation to enter the country?

The now infamous Russian lawyer, Natalia Veselnitskaya did not have a Visa but was let into the country anyway. Also while she was in the U.S. she did work that was different from the work for which she was granted permission to be in the country. All of it had to be approved by the Justice Dept. run by Obama’s Attorney General Loretta Lynch.

The Russian lawyer who penetrated Donald Trump’s inner circle was initially cleared into the United States by the Justice Department under “extraordinary circumstances” before she embarked on a lobbying campaign last year that ensnared the president’s eldest son, members of Congress, journalists and State Department officials, according to court and Justice Department documents and interviews.

Veselnitshaya has affirmed that she met with members of the Trump team, politicians, and State Department officials to lobby against the Magnitysky Act. Other witnesses have confirmed this.

That work was a far cry from the narrow reason the U.S. government initially gave for allowing Veselnitskaya into the U.S. in late 2015, according to federal court records.

The Moscow lawyer had been turned down for a visa to enter the U.S. lawfully but then was granted special immigration parole by then-Attorney General Loretta Lynch for the limited purpose of helping a company owned by Russian businessman Denis Katsyv, her client, defend itself against a Justice Department asset forfeiture case in federal court in New York City.

The prosecutor said Justice was willing to allow the Russian lawyer to enter the United States again as the trial in the case approached so she could help prepare and attend the proceedings.

She was also supposed to be out of the country by the time she met with Trump Jr:

She (Natalia) then asked federal prosecutors for permission to enter the U.S. to work on behalf of a client in a Manhattan. Prosecutors granted Veselnitskaya temporary “immigration parole” in late 2015 but it expired in early 2016, the U.S. Attorney’s Office of the Southern District of New York told The Daily Beast.

That raises the question of how Veselnitskaya was able to enter the U.S. in June 2016 when she visited Trump Tower.

In January 2016, Veselnitskaya filed a declaration to extend her parole past that month. The U.S. Attorney’s Office objected.

But there are still questions about how she was allowed into the country at the time of the meeting.  The Hill explained:

None of this suggests this is was an Obama trap to ensnare the Trump family. But there are some who believe that’s exactly what happened:

The Russian lawyer who met with Donald Trump Jr. last June at Trump Tower, under the guise of offering the Trump campaign damaging information on Hillary Clinton, may have been a “dangle” aimed at enticing then-candidate Donald Trump and his associates into colluding during the campaign.

“I absolutely think this was a dangle,” said Mieke Eoyang, a former House Intelligence Committee staffer and now the vice president for the national security program at the organization Third Way.  “I would assume it was not the only one, and that we’ll hear more about these efforts as we go along.”

Joseph Nye, a professor emeritus at Harvard’s Kennedy School of Government who formerly served as chair of the National Intelligence Council, also said it was plausible Veselnitskaya was used to determine whether the Trump campaign was open to colluding with Russia.

“The Kremlin is not so soft hearted that it would set up a meeting to restore adoptions,” Nye said.

At the very least the fact that she was allowed into the country indicates that Loretta Lynch was just as ignorant about  Natalia Veselnitskaya, as Donald Trump Jr. was…so maybe its time for the Democrats and the MSM to calm down a bit (maybe it’s time to switch to decaf).