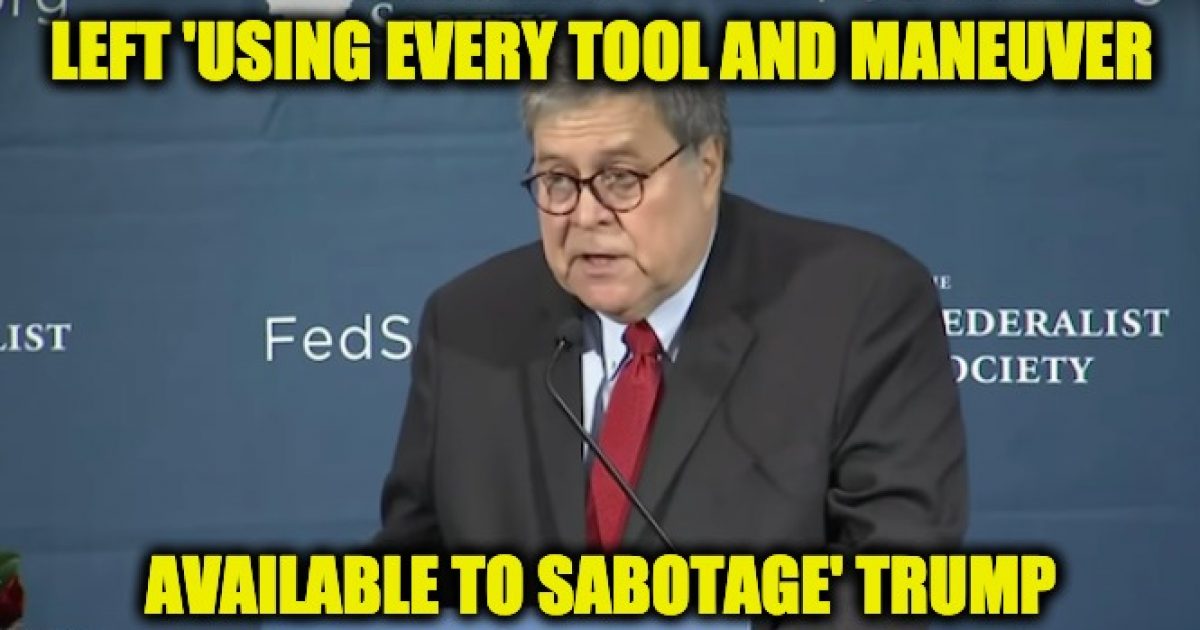 Speaking to the 19th Annual Barbara K. Olson Memorial Lecture at the Federalist Society’s 2019 National Lawyers Convention, Attorney General Barr proclaimed what all Republicans have been thinking from day one. The “resistance” is determined to bring down President Trump and every member of his administration by any means necessary, and he includes the courts in his criticism. After reading his entire speech it makes one wish that AG Barr was his first DOJ pick.

This speech was a classic:

Immediately after President Trump won election, opponents inaugurated what they called “The Resistance,” and they rallied around an explicit strategy of using every tool and maneuver available to sabotage the functioning of his Administration.  Now, “resistance” is the language used to describe insurgency against rule imposed by an occupying military power.  It obviously connotes that the government is not legitimate.  This is a very dangerous – indeed incendiary – notion to import into the politics of a democratic republic.  What it means is that, instead of viewing themselves as the “loyal opposition,” as opposing parties have done in the past, they essentially see themselves as engaged in a war to cripple, by any means necessary, a duly elected government.

He chided the Senate for not allowing Trump to staff his administration:

A prime example of this is the Senate’s unprecedented abuse of the advice-and-consent process.  The Senate is free to exercise that power to reject unqualified nominees, but that power was never intended to allow the Senate to systematically oppose and draw out the approval process for every appointee so as to prevent the President from building a functional government.

Yet that is precisely what the Senate minority has done from his very first days in office.  As of September of this year, the Senate had been forced to invoke cloture on 236 Trump nominees — each of those representing its own massive consumption of legislative time meant only to delay an inevitable confirmation.   How many times was cloture invoked on nominees during President Obama’s first term?  17 times.  The Second President Bush’s first term?  Four times.  It is reasonable to wonder whether a future President will actually be able to form a functioning administration if his or her party does not hold the Senate.

And Congress in general:

Congress has in recent years also largely abdicated its core function of legislating on the most pressing issues facing the national government.  They either decline to legislate on major questions or, if they do, punt the most difficult and critical issues by making broad delegations to a modern administrative state that they increasingly seek to insulate from Presidential control.  This phenomenon first arose in the wake of the Great Depression, as Congress created a number of so-called “independent agencies” and housed them, at least nominally, in the Executive Branch.  More recently, the Dodd-Frank Act’s creation of the Consumer Financial Protection Branch, a single-headed independent agency that functions like a junior varsity President for economic regulation, is just one of many examples.

Of course, Congress’s effective withdrawal from the business of legislating leaves it with a lot of time for other pursuits.  And the pursuit of choice, particularly for the opposition party, has been to drown the Executive Branch with “oversight” demands for testimony and documents.  I do not deny that Congress has some implied authority to conduct oversight as an incident to its Legislative Power.  But the sheer volume of what we see today – the pursuit of scores of parallel “investigations” through an avalanche of subpoenas – is plainly designed to incapacitate the Executive Branch, and indeed is touted as such.

And the courts did not escape Barr’s honesty:

Let me turn now to what I believe has been the prime source of the erosion of separation-of-power principles generally, and Executive Branch authority specifically.  I am speaking of the Judicial Branch.

In recent years the Judiciary has been steadily encroaching on Executive responsibilities in a way that has substantially undercut the functioning of the Presidency.  The Courts have done this in essentially two ways:  First, the Judiciary has appointed itself the ultimate arbiter of separation of powers disputes between Congress and Executive, thus preempting the political process, which the Framers conceived as the primary check on interbranch rivalry.  Second, the Judiciary has usurped Presidential authority for itself, either (a) by, under the rubric of “review,” substituting its judgment for the Executive’s in areas committed to the President’s discretion, or (b) by assuming direct control over realms of decision-making that heretofore have been considered at the core of Presidential power.

The Framers did not envision that the Courts would play the role of arbiter of turf disputes between the political branches.  As Madison explained in Federalist 51, “the great security against a gradual concentration of the several powers in the same department, consists in giving to those who administer each department the necessary constitutional means and personal motives to resist encroachments of the others.”  By giving each the Congress and the Presidency the tools to fend off the encroachments of the others, the Framers believed this would force compromise and political accommodation.

The “constitutional means” to “resist encroachment” that Madison described take various forms.  As Justice Scalia observed, the Constitution gives Congress and the President many “clubs with which to beat” each other.  Conspicuously absent from the list is running to the courts to resolve their disputes.

And if Justice Scalia left out the courts, he did it for a reason.

AG Bill Barr on the Democrats: “they rallied around an explicit strategy of using every tool & maneuver available to sabotage the functioning of [the Trump admin]… they essentially see themselves as engaged in a war to cripple, by any means necessary, a duly elected government” pic.twitter.com/T2g03ATvcB

This was an incredible speech from start to finish

Good lessons for the liberals who claim they are for the constitution and the rule of law!

This was a fantastic speech!! It’s worth watching the whole hour

I agree thefore a video of Barr’s full speech follows: